The Art of Seduction
Lessons from and with Dita Von Teese 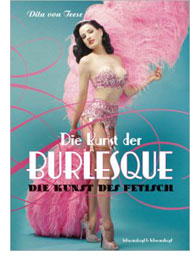 When I opened last Sunday at a dinner in the morning mail Schweinske, I nearly stopped breathing was staggered. 5/6stel on a double side stretched the only thing a, the distinctive :Dita von Teese:. You can tell the author distinct taste, after all four Dita plus a book cover graced these pages nearly two. This is not even typical knowledge, Dita that was not always the black-haired Snow White, but earlier moved through the area as a blonde pinup.

On the rain-, after that the reader has to, the author explained, that Dita Von Teese would have published a book, that, Accordingly, in all honor their course The Art of Burlesque is. Who but Dita should also write something like (or at least authorize with their name)

As Dita says in the book itself about itself?

“I live glamor. Every day. Jede Minute. If I'm cold, I nestle myself in a fur stole. I wear stockings. Applies to me: Glamour is all about”

Who, if not Dita Von Teese should remove such words?

Tricks, much the cause of Dita Von Teese

1. Pull your lipstick regularly to, but emphasizes slow. And you use it a great pocket mirror.

2. Set up your stockings and suspenders as, as if they were trying, to do it discreetly.

3. Let it all hang one of your heels from one foot.

4. Touch slightly at the points, where you want to be touched by him: the neck, at the neckline, in the face. Make the almost imperceptible. And do not forget, of all, what he says, to be fascinated!

5. Wear something, that feels good: Velvet or silk or cashmere.

6. Enter your favorite scent only slightly. Let the man get close to sit, so he can smell you. 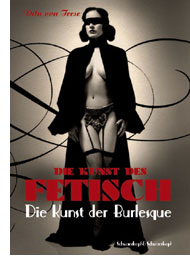 As if that was not enough for a book, but it has two sides. Who anfägt to read on the other side, reads the book The Art of Fetish:

In the second part of the book elaborate Dita Von Teese leads the audience into the mysterious world of fetishism, a. She tells, as it was inspired by Bettie Page is a fetish model and her personal favorite fetish on numerous fascinating images before: High Heels, Stockings and in particular the garment, that it has in countless precious variants, the corset.

Better scale 28,89 Euro falls to me not spontaneously.