On it went to Pricilla to sign up for tthe first events of the evening finished close. Baccara were scheduled, the original members in the Drink B should occur and where there should be some VIP tickets. Before pleasure but for now the work. A little Makeover, refresh or re- – and that we were about to do in Pricillas new Trans-WG.

Now she has lost her crazy genius Loft for rent increases and opened a small trannies WG. The whole thing is all kinds of small, but it plays your music and a breakfast bar, So almost as before. The whole thing is a shop with frosted glass on the ground floor in not the best area in Berlin – But what does it matter.

Sheila and I therefore stöckelten to the front door and rang the bell and knocked for a while. Thus attracting these two tall, miniberockten-girl silhouettes obviously the attention of two foreign citizens, which approached us and with the words

anything asked. We were also after multiple repetition of this sentence is not very clear, what they wanted from us, but which was finally clear, that they had not just to do with real girls. Instead of now but soon to run away but for now they asked to fire. Further conversation was unnecessary, because Pricilla finally opened the door and took in us.
While Sheila and newly styled by Pricilla I made sure, that the Caipirinha flow did not decrease. I found my caipirinhas quite acceptable, the other ladies found this somehow not… Made rather then again the next Pricilla. One could think, I would have pushed myself before work. War aber nicht so 🙂 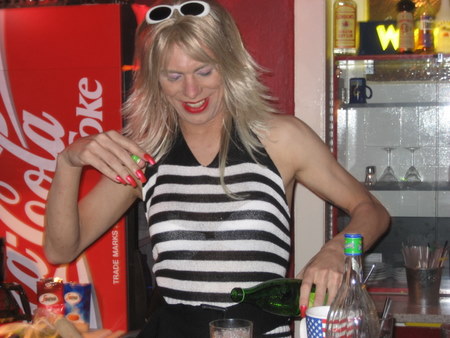 It has also shown, Energy Radio that plays really good music on Saturday nights. On the night the disco boys played a full set with cover versions. Pretty great and so of course the soundtrack of this styling session.

No more rocks even if this song aloud Pricilla, if you play it, I find him still very great – and I still do not know, Djana as the first time for him the Pearls of the Night Played party…

Style, Listening to music and drinking caipirinhas. Actually, this could be the employment of a whole evening, but we still had some prior. the Baccarat waiting for us