Stars and starlets I – Valery Pearl

Since Olivia Jones instead prefer Hamburg Germany and the whole world happy with their existence, has Valery Pearl been sent, to become the uncrowned queen of Hamburg but full Gay Scene.

She has made it clear. Valery Pearl is omnipresent and ubiquitous in Hamburg.

She started as a short-term “Adopted daughter” von Olivia, on the parties, it was known to a wider circle. (probably want to know a little more of that today no one). However, it was quickly and began to fledge, with the Pearls of the Night, align their own party series and has learned a really fast, how really well organized parties.

Your Pearls of the Night was full from time to time, so that the Prinzenbar finally burst at the seams. Much like Olivia and unlike most of Berlin drag queens themselves Valery sees this more as a host and not just as a DJ. Instead, surround yourself 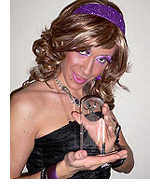 Valery with good DJs like Tom Shark or Djana, to bring out the best from the world of the House on the platter.

Deserved reward in addition to a house was always full of Golden Hinnerk for the best gay party hamburgische, The Valery 2006 allowed to receive also hosted on the happenings of their party.

Meanwhile, Valery Pearl has the Valery Pearls Of The Night Extended with the Berlin DJ and Maringo :Superzandy: rocked the well-filled docks. I guess only the first time and not the last time, because as I said, Prinzenbar like the bursting at the seams with her. The dock is certainly a possibility, intercept the fuller parties to the typical summer doldrums.
In addition to their parties – or rather just by their parties Valery Pearl was next so sonorous names such as Tatjana Taft and Lilo Wanders Honorary Member and religious lady of the house Notre Dame Sainte Diana the Free and Hanseatic City of Hamburg, hamburgischen the parent company dder Sisters of Perpetual Indulgence.

Hilton kann, I can also

Usually followed by a deep swig from the Pearl Dry Dose, a can of sparkling wine. Context, however, which is between Valery and the Pearl Dynasty Secco, I do not know. But I bet, There is a. Only what was there before? Secco Pearl oder Valery Pearl. There seems to be a chicken / egg problem, and it is only Valery with her catchy voice, but that is very reminiscent of Verona Poth, can answer.

Otherwise Valery Pearl is the flagship of Out in Hamburg, where a monthly column as well as an in & Contributes heading out. For this purpose they are found in regional radio, Newspapers and television broadcasts. As I said, within and outside of the gay scene and now there is little chance to escape Valery.

She has really geschaffft, to be omnipresent in Hamburg.