Some time ago visited Nina, Sheila and I yes the good Ray Kay in voles and were completely thrilled. When he later came into the bar to have a few photos to make and distribute some of his autographs, He invited us into his Late Night.

Unfortunately we missed the first, but last weekend we were going to watch. A mail and hey presto my name was on the guest list. Sheila whilst ensuring, that Janka and Mel also still found a place and Nina still had a direct phone line to Kay.

So it was done, We had to arrive only. Of course, the three girls have a little more time left than necessary for Janka and we arrived after the official start of the show going with Janka.

What the hell, then we have up our appearance. Five girls, which eventually enter in the show will surely attract more attention than five girls, the normal storm the room in the mass – we thought. However, we have not bedachtz, that we are dealing with someone, of much more importance to his appearance. Kay Ray selber. 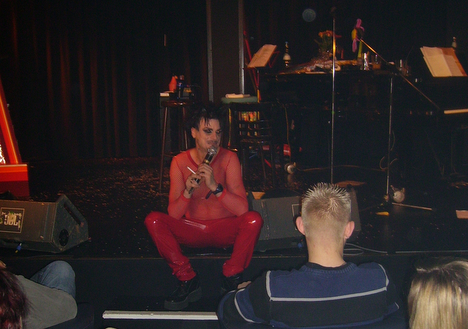 So we just 20 after 12 am KGB? BKA? NSA? Well at this theater, named after irgendsoeinem intelligence arrived, nor were the masses legs before checkout in the abdomen.

We just stöckelten forward and it is amazing how easy it passes by a snake, if you look at it as the most natural thing in the world. I mean we did not pay but only say our name and enter.

Well, Nina would have been the only, it could prove. SMS on mobile phones – but did not need it, because it was also let in as.

So after we were late but there, had taken our seats and ordered nachos with seltzer began with 35 Minutes late to the show. The show was great again. Of course, you already knew one or the other gag from his show, but that did not, since the Late Night is obviously mostly of improvisation. Kay brought so always between something new to the stage.

For example, he had two go-bartender, who had brought their own bar and guests credenzten nice cocktails. I thought so, that the two, who came forward would also take place again sometime in the next – machten sie aber nicht 🙁 Merken: nächstes Mal gleich nach vorne stürmen und Cocktails abstauben 😉

No matter, Showbarmixer the two were definitely large class. Later, they still showed their show. Soe jumped around, threw around juggled everything was round as a square and whip up some cocktails while. Sooo great cinema.

Eher ein horror movie war allerdings Person, Kay came to the hairdresser hour on stage. She held so still in some, like Fidgety and was so cocky in some, as… as… I'm sorry I can think of nothing comparable. No matter, what was on stage, I did not know and I'm sure, that it has this behavior not just introduced the best of all possible hairstyles…

Ansonsten pie Ray Home das, what he does best, themselves and others to take the mickey, to sing and tell jokes. For example, the Fukspruchs between the Aircraft carrier and lighthouse.

While the rest of the baggage to talk to Kino International opened, listened to Nina Kay and I dance the good until the end of his show, and then also went.

Again he ended his show with the nice song from Lucy van org song for my enemies. Whether Kay has so many enemies?

Also: again a very enjoyable evening with Ray Kay and thank you for the space on the guest list.