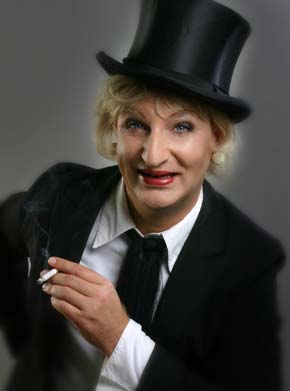 As a DJ, drag Adessa Zabel can hear it better on every gay party in Berlin, as a German housewife Edith Schröder seen it on the boards of nonsense comedy Comedy Club on Kurt Kroemer show up to their own show Simply Zabel detention For example, the BKA Theater.

In addition, they can be as Karin Hoene, Hurriyet slackly or Evelyn experience in a variety of feature-length films, which, however, generally a certain trash-factor can not be denied. For example All love mom, where she is acting as mother of Biggy van Blond then probably more for fans than for the cinema of the world

If cinema in conjunction with Ades Zabel, he prefers the Kino International and by that I mean the Club International, the Irrenhouse, the GMF Club, the After Aua or any other good gay party in Berlin.

Now when I say, she was one of the best drag-female DJ from Berlin, this is so, as would a blind tranny talk of colors, for I can say is, if I like a song, not whether a transition was good. But I do not need, because, fortunately, I heard from someone, of the turntables is equally devoted following sentence: Ades is one of the few in Berlin, which can properly. So also I like to believe that. Not for nothing this allesverratene nose as Ades Zabel or Adessa is really common to see.

Then times also with the usual trans show, such as with :Gloria Viagra: Kinzo in the official show program for the G8 Summit in Heiligendamm, as they protested against these same.

To Trashy, to coarse?
Then Ades Zabel's not for you. Your dirty jokes on stage are coarse, Trashy their films and their performances as well as here on the Mandonnamania.

Nevertheless, and perhaps because of Ades Zabel is but one original Berlin, that no one would want to miss. Somehow it seems to be a little over the mother of the Berlin Trans Scene, although it actually only has a foster daughter with Biggy van Blond, but has now developed quite outstanding. The education has therefore worked.

Ades Zabel was myself of something presented over two years in an asylum House times and was surprised, I did not know – whence also, I came from Hamburg… I was surprised alleerdings, when I saw her a week later in nonsense Comedy Club. Wow.

One thought on “ADES Zabel – Berlin”