A standard work of the Berlin Trans Scene? 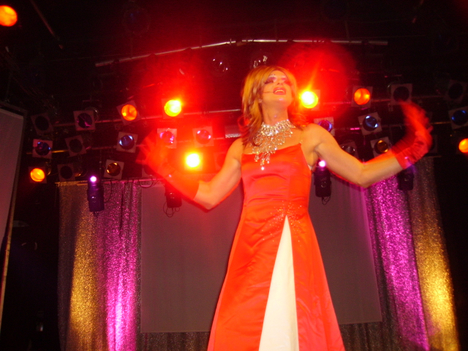 Tatiana, ihreszeichens Berlin CSD sovereignty of sometime to keinerweisssorecht has a second part of their work Tatiana, Fateful Years of Queen put on the web.

She describes her fictional story in Berlin Dragzene, Your immersion time as CSD and its sovereignty

I have not even noticed the first part, then the second definitely delicious. Although Tatjana “Similarities with all other persons or events in the past, Present or future” possibly titled as random, I can not escape the fact, me that several of the stories, the people, Parties or practices appear quite not quite as random. Still, most people are still made good. Okay okay, somewhat exaggerated but, but has not played completely wrong on the whole.

This story could give to all Berlin Neutransen as the great Trans Almanac. Tatiana talks about the Schwuz, Wigstöckel, the Irrenhouse, the Kumplenest, the GMF, The Bangaluu, den CSD, the different transport scenes in Kreuzberg and Mitte, in your history are as varied as people Kaey Tearing, Gérome Castell, Chicago Rose, :Mataina Ah wie Süß:, Barbie Breakout, Melli Magic, :Nina Queer:, Polla Disaster, Tilly Creutzfeldt Jakob, Biggi Blonde, :ADES Zabel:, or Daphne Baakel.

Anyone who has read the, has already had a first glimpse of the Berlin drag- and Transeszene. I'm looking forward to Part III

The deep-set eyes, I had lined with mega long fake eyelashes, my lips just shamelessly painted and eyebrows just a few centimeters above the original, heavily pruned painted. Only the big nose I could not hide with cosmetic tricks, and the Adam's apple does not also.
But since I also acted as a gay man, who plays a woman, and no one knew, that I was a woman, Playing a man, the turns gay, to play a transvestite, It was not so bad.
I even had an extra left the hair on the upper arms, peeped between the glove and a sleeveless evening dress. I was, gave me in these circles as something real.

Gérome had begun, a little to take care of me.
“Y'know ¾, Old, We shemales have to stick together. Each of us here has daughters and sisters, the system I brought from USA. In, sonst ha`m wa doch keen! And who should take care of, nich when the family? Ebent! You are now my daughter. And for you I have also been a; Your daughter's name is Frank!”
“My daughter's name is Frank? Absolutely not,” I resisted from. “¾ I own nothing and I do not have the nerve, to take care of as a lost brat.”
“¾ Frank is not a brat,” sagte Martina ah – as – Sweet, at the counter of the Bangaluu `s got us. Martina was the only salaried tranny all over town. This chic club in the middle, the Kaey would certainly enter only dead, she was the consummate hostess. She liked everyone and everyone liked them.

Gérome had imagined Melli Magic and Barbie Breakout at the counter of the GMF. The GMF was a chic club in the middle, where on Sunday evening, the young, would cap off the weekend, pretty and rich gay nightlife of Berlin.
Now I understood kaya, Â's disparaging remarks about “¾ Mitte.” The Trans-scene in Berlin-Mitte obviously differed greatly from the in Kreuzberg.
Barbie and Melli embodied pure glamor.

Melanie, a truck driver in zebra dress, the safe 120 Weighed kilos, but still proudly known, so go to the bakery every day and spend his evenings on the Internet, where it is marketed as a 47-pound beauty, or Sieglinde, who do not trust, remove her beard and put it value, neither hetero-- to leave even classify themselves as homosexual, but “¾ Transmann” or “¾ multisexuell” their identity seemed to narrow limits set to.
“¾ I am unique, do you understand,” her words were.
My mind was whirling. How easy was my life but! Everything in effect acting!

Nina Queer is genoss, to break all taboos and remained so always talking. Similarly, excessive as Barbie Breakout or Gérome, but it was still doing a shrewd businesswoman, who had worked his way up from the French Seller to the party organizer and owner of his own pub. Your go-go dancers were an ancient, flabby couple, the naked dancing, and their shows were bananas puked, Smeared Nutella or pelted the audience with minced meat. The Berlin loved the.
I was always totally unleashed at my performances, my slutty Playback, lost my wig fell or equal to all of the Stage. So I drew me a solid, reputation.

Tatiana's story seems like a lapse of some years ago Berlin party scene and it's again time to read.