or: an incredible waste of time and resources Make Up.

The weekend was kind of a disaster for me. I have no idea, why so pretty, But last weekend, I made up a total of three times myself completely and I have not taken a photo of it.

The last Saturday was one of the sunniest days for ages and the Carnival of Cultures demanded me. Summer, Sun and hot temperatures. …I do not know why, But somehow I was then, not in a long pant, but attend the parade in a summer dress. 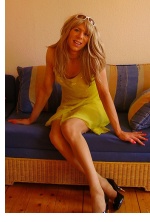 So I make-me, got my yellow – since ancient times no longer supported summer dress out and drove the Carnival of Cultures afterwards. ( Consequently, I stood in high heel sandals on that already mentioned fuse box and looked at the move to ). I was able to find again, the same acceptance that every discussion the common Berlin, and the common Berlin Tourist, who looks at the Carnival of Cultures, does not matter, whether as a transvestite on the fuse box is. I stood there for several hours but quite prominent and visible place and I have not heard while a stupid claim and only twice heard laughter light ( each group a Muslim-influenced teens or tweens ). Now, which makes it? Nothing!

Was much worse, I say at the end 240 Images had, However, not one had of myself… This is annoying.

Nundenn some point it was half past six and my batteries in my digital camera was empty for long anyway, so I cycled home.

I looked in the mirror and had to admit, that my makeup still looked really good despite the age of seven hours, but it did not fit the evening, was announced as the German Fetish Ball…. For now, I could still tolerate an hour of sleep. So back down the entire makeup from her face, from the shower and then to bed at around 21:00 to be fit. 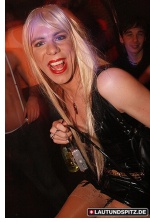 …That was a mistake, I was in fact not fit the new and much darker make-up was not done yet, als by Sheila Knapp 23:00 called. While I was already wearing the coat dress but somehow all this was not really ready and my desire, 50 € to pay was, frankly, just as medium. Sheila comb the Idea, to talk over the bouncer so long, until he could enter us, but why would they call again. The matrix is ​​not far and I could come there directly. So I got ready in peace. Black, bleak, just fetish Suitable for fitting to a black PVC dress.

…that the bouncer did not work – I do not really sad – But Sheila and Janka were in.. After the German Fetish Ball GMF but should still be sought… So I could think, Now the next thing I – well maybe 2 Thus exaggerating at home hours…. …I decided, move me, because PVC dress and GMF – somehow that does not quite fit together…. Why not at least once but I just took a picture of me, I can not really say… Maybe, because there already are any in the outfit? Maybe! Well. The new dress I thought, I could even tolerate another Make Up. 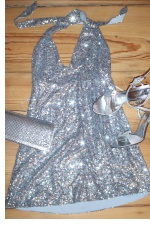 A short Nackholderkleid gray with silver sequins, I never wore and also sparkling silver sandals, I also never wore. Makeup for a cooler than PVC dress was announced as, So everything new up and back down. …That was amazingly fast and I was ready and could not wait quite a while.

My cycle was below, I was tired and – because holiday – was to be expected, that the GMF is pickepackevoll. So I asked Sheila to login again, if they were in the GMF. I wrestled a bit with me, but then decided in the GFE Vs question. BED for my bed. Ergo: Sequined dress and makeup for the third time that day back out of the face. And why I did not at least once a picture NOW? After all, it was a new dress.

So I slept an equal and came as the SMS of Sheila, GFE that I was not worth it for a long time in the land of dreams.

So I have wasted enormous amounts of time in the bathroom that day and consumes a lot of make-up, without having been at a party and without even having a picture taken…. Now, which is hopefully on the weekend otherwise, when :Nina Queers: Irrenhouse pending

One thought on “3 times make up and not a photo”