Prevent Mediaspree? And, No, A Ja oder, And, A.

There, where today a large part of the Berlin Wall stand and small cafes and beach clubs, Kiki Blofeld or Bar25 to form a unique Berlin scene en masse in the future provide large buildings and some large high-rise buildings for, that there developed a modern but boring cityscape and open spaces belonging to the present shortly the past.

This is to prevent the sinking Mediaspree initiative has taken up the cause and is elected for tomorrow.

It may be tomorrow 182 591 Kreuzberg, Friedrichshain and I decide between two different proposals, to be quite similar firstonce primarily, but contain major differences in affordability and massiveness of the planned real estate Spree.

Here in Kreuzberg is the only way the vote

communicates, you must ankreuten, if you want to sink the Mediaspree. This means that you untersctützt the citizens' initiative, the idea of ​​district councilors Assembly rejects and chooses the former idea, if both ideas decide the majority…. Generally, that's right, but I'm still decide differently.

I also do not want to have Mediaspree, and will accordingly support the plan of the citizens' initiative, However, I will also give the compromise proposal YES, because only when it reaches the required majority, this is much better, as if both ideas fail. I will, of course, but the proposal of Mediaspree give my vote, should both get the majority. 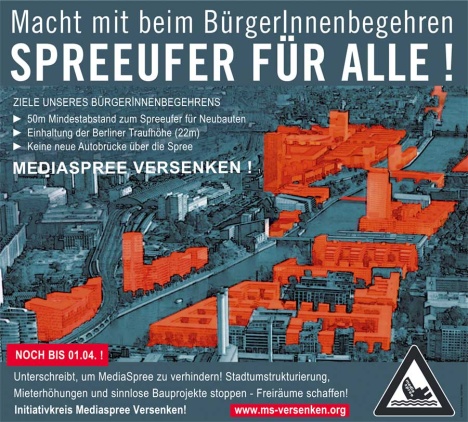 But frankly is certainly the biggest problem in the turnout. 15 % the voters must choose. Next to me so 27.388 Berlin. This is much more difficult than 50 % And. Be right.

Probably would be the only way, To achieve this, collect ballot papers in each house and get them to apply for the absentee ballot people – and also give the postal ballot documents to the Office…

Otherwise, I see black for this referendum – unfortunately.

Of course I know, that the so-called “Compromise proposal” no compromise, but a proposal is, that sounds just nice, but otherwise is as cheap as possible… But sad but true, both ideas are – taken for themselves – still better, as if the two ideas do not get the required majority..

One thought on “Mediaspree in Berlin. Prevent Spree property”