At the weekend was the Honeyball 2008 in SO36 and on the whole was under the motto “Swing meets Rockabilly. My first thought, was when I heard the: Klingt toll… but in SO36??? that'll be nothing.

I must confess, that my SO36 has not been established as a venue with flair in memory. For me, the SO36 has remained a rather lifeless space. Rock concerts, Punk concerts? And! But Swing? Well I do not know.

The evening was already fated as we left, because it was raining cats and dogs…. In addition, horses, Cows and probably also some budgies. In short: it was an absolute crap weather. Nevertheless, before we had to have another opportunity to give to the bank to pay any admission. But Sheila and I were as stupid in front of the ATM. She could not remember their number and I also had some problems… Once entered incorrectly, I was, however, still some money and was able to rescue this evening as Sheila financially. Otherwise we had to save him himself.

But first we drove first chewing gum towards SO36. That was a mistake – also das kaugummikauen… Have I not for two weeks, a temporary crown in my mouth and told me the dentist still something of “Do not chew gum”… Consequently, I now have NO more temporary crown in the mouth but this now in the handbag. That suupa!

Arrived at SO36 we had to wait a little, at least until the rain subsided so, that Sheila was able to pick me up with the screen side of her car at my car page. Otherwise we would have been so drenched, that we would have to cancel the evening before the first party…

Since we had already feared it as nihct made it to the guest list, The man looked at us at the inlet only meaningless but refusing to – but fortunately overruled him another nice guy, of us …durchwank, durchwunk waved through?… Well let through just.

So we moved to a Honeyball and it was confirmed, what I expected. The SO36 is just a store, where it is really hard, produce an appealing flair. Since you can still hang as many pictures and try, to make the store homey. It's just difficult. 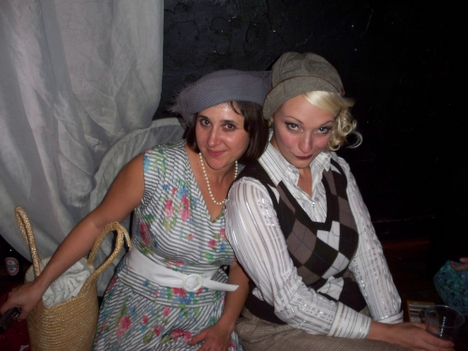 But a party is and yes it normally with the audience – and the agreed. We arrived about half past eleven. However, the Honeyball had gone on for 19 Clock and since it was well stocked and there was dancing, they were worth.

In such situations, I always get annoyed, I've never made it to a dance class… However, I would have probably otherwise hardly dared, because almost invariably knew the dancing there, what they were doing there.. And they did now been 4 1/2 Hours. What condition.

But the second I knew not at all well, What dance class should I visit, Waltz for sure was not announced here. So there was the situation, wo zu irgendeinem mir unbekannten Rock’n’Roll Titel in einer Ecke 5 Girls afforded a formation dance, währen in einer Ecke feinster Rock’N’Roll getanzt wurde und daneben ein Pärchen ziemlich klasse dazu Swing tanzte. Not to mention the other couple, that danced a dance I completely unknown, the co-host Else Edelstahl than “Maybe Hillbilly” classified. Wenn man tanzen cane, you sure about that much fun, but also to watch, it is very amusing.

The visitors were quite different, and accordingly dressed differently from the 20s to the 50s. Exciting mix. Sheila fiel auf Typ one, He wore a cowboy hat. These more courage than is necessary for our outfit? Courage? For my outfit? Soooo bad I can see out at all.. Well not quite as they said it then but. It turned out, the guy was a member of the single band, we would not have missed. The blisters are a Grey 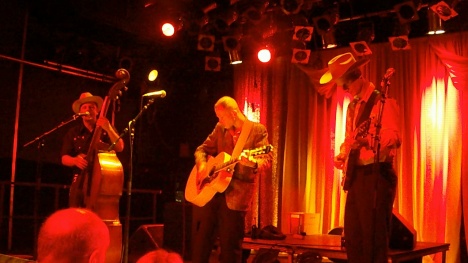 The cowboy hats they put in my eyes visually in the Country corner, but do not ask me, what they actually played. after a conversation with Sheila I have much more information and much less idea than before

Rock’n’Roll, Rockabilly, Psychobilly, Hillbilly, Rockin’ Hillbilly, Country, Walking in the punk rockabilly, perhaps with the whole ska inserts towards Madness and what I still remember everything…. Phew I wave the white flag and surrender !! I like the music, but does not necessarily know, EXACTLY what I hear there.

Anyway, The band was nice but not great and they had the usual problem every cover band. If they intersperse their own songs… come to just less, as the cracker they enact otherwise. Damage.

Overall it was nice, but I think for such parties is the SO36 many light not THE party place. Also, I found the music later on the popsicle party at times a little snappy..