Banks need to even itself billion loans, instead of spending loans in these same heights, Cars are stockpiled, if at all car plants are open, BASF closes 80 Plants around the world, China fights even more with the economy than Europe and the oil price is as low as for many years no longer. One wonders whether the troubled world has gone mad and what is actually exactly the reason.

I have the answer to both questions:

The second question is harder to answer something, but the last weekend in Irrenhouse revealed to me anything. all the related economic history and the real reason. It is so easy and so simple, that you could hardly get it myself: Stella DeStroy is to blame and the whole thing is just a very unfortunate set of circumstances. But from the front: 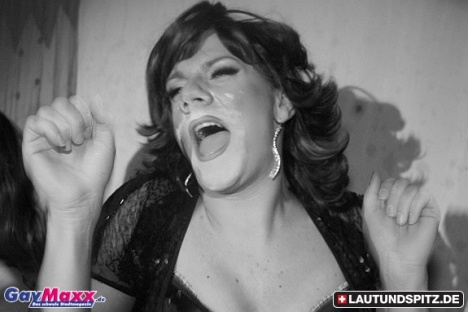 House in a mental Stella mentioned with pride their latest achievements:

Their total appraised value Stella this evening with about 25 € (which we then the underwear and the rest of the clothes could also calculate roughly). Man cane also sagen: Stella has saved this evening, and thus the entire world cooked a stodgy soup, who needs the spoon up? Exactly, the bank managers, Opel employees and well over a billion Chinese.

Ohgott. How could this happen. Now it is well known not only for today, that the Chinese economy of trannies in the world lives. Which species should otherwise churning pumps from size 40 purchase, every few weeks down new wigs of different colors and cuts and that the pantyhose industry has long lives of trannies, is also a secret kept under wraps rather.

But this is a very fragile braid. Man kennt das ja. A butterfly can cause a typhoon,:

In this case, a global economic crisis. 25 € for a complete outfit, that was shipped with various containers from the Middle Kingdom to Germany. 25 €, ranging hardly for the freight cost, how are because the Perückenpflechter, the pumps manufacturers and the industry survive Tights??? Just not at all! They made rows of sealing.

Thousands, if not millions of poor Chinese people lost their jobs and the already seemingly secure income in the coming years, that was already firmly planned for the first car. So the result was not only, that a million Chinese lost their job, but that in this way the big three automakers in the U.S. had to drastically scale down its sales figures. This resulted in mass layoffs here and here, the elimination Felt safe income, which were, as with the Chinese already planned and long-term – and owing in large part to home loans.

And what has happened to the American credit market. have probably noticed all the. But the Verpflechtungen go. Long is also known, that the German banks, many of these loans mirttlerweile occupied and thus at once were impaired. Loans were now needed at once and no longer issued.

Thus was the great German car brand Opel, which is of course dependent on General Motors – whom there, as already named now is not as good – no more borrowing money from banks and have to ask the state for help… In turn, but has already massive hereingepumpst money into the banks and has not so much money. Mass layoffs can therefore also be expected and even the opel employees can no longer afford their own cars, which are, yes, but also no longer being manufactured, because they will not have…

This in turn attracts BASF in the crisis: There is no more plastic for cars, Synthetic hair and cheap pumps needed. 80 Plants have already been shut down. More to follow.

And save all that just because the outfit berlin shemales.

It does not work that. I think I need to go shopping tomorrow… even though I have it so the time not so thick. So if I do not quickly find a new job, then millions more Chinese can not buy new cars. What does this mean yes you can easily imagine.

A further fall in oil price. So let no price shock travel home for Christmas.

One thought on “Stella DeStroy is to blame!”