Kitty, Daisy and Lewis – “Like the Kelly Familiy only in well”. 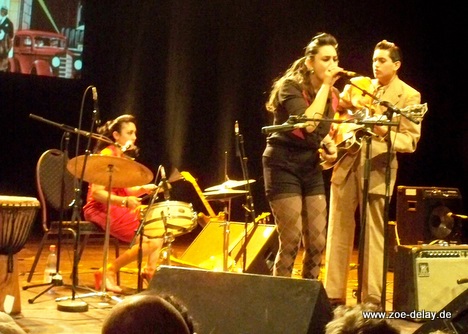 …this is not the, what I think, but the, what a visitor to the Kitty, Daisy & Lewis soft…

We were at the weekend zur Swing Royal in Admiral Palace and half the town was plastered with posters for this event. So waren knapp 1.700 Persons incl. I present, of which appear as 1.700 Personen excluded. knew me, wer Kitty, Daisy & Lewis are. Once I had not been paying attention back to Sheila's blog and so did not know, what to expect and what is so special about this band…. Nund, they play rockabilly.

That in itself is nothing special and such bands there are also many, but this is very unusual. Kitty, Daisy and Lewis actually glad and so they have all together the last name Durham. So you're just siblings and 15, 17 and 19 Years. So young blood. Here are the three but by no means a school band play their instruments perfectly.

And when I write here Instrument(and) then the (and) absolutely meant as a plural, play because the three, Drums, Harmonica, Organ, Piano, Accordion, Banjo, Oh yeah xylophone and they also sing and the equally great. For this purpose they wechseten to each song their instruments and singing. Alle sind drei Multi-Instrumental. I'm not sure, ob es Kitty oder Daisy war, but one of them had a really tube – or she has received extremely vile Bass… But probably both…

Above all, you could see, that the three just having fun with it, Are making music and far from, therefore come as a professional band fucked. I can at times a cool, remember great newcomer indie band, the us only 40 Minutes we had to wait, then 35 Minutes of music made and left at the end of the stage without adding. Kitty, Daisy & Lewis are there different. While it all seemed a bit disorganized, with their allowances but they really seemed to have fun – and the audience had definitely. All, with whom I spoke were very impressed and very enthusiastic.

Should not remain unmentioned but the other two band members, although they were on stage,but very discreetly kept in the background. Mutter Ingrid am Contra Bass und Vater Graeme an der Akustikgitarre… Well, to have such musical siblings, must already be some of musicality in the family. In this case, apparently a lot. But in the end just a little, the visitor said as quoted above. “The Kelly Family in gut”. For me Ktty, Daisy & Lewis but rather the best band since siblings “The Corrs”. And I like “The Corrs” really like. 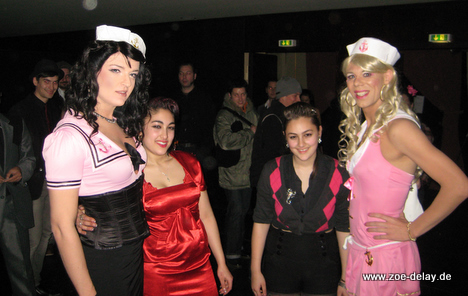 Toll – and again shows, that there is nothing placed – was, that the entire family as a matter of course in the midst of all the other visitors celebrated after the show at the Admiral Palace and danced to the music. Absolutely not, of course, and thus all the more great. Fortunately for the two “smaller”, because after 24 Clock they could celebrate without problems, because the two guardians were indeed present.

So I was very impressed.