If the Pope knew of the: 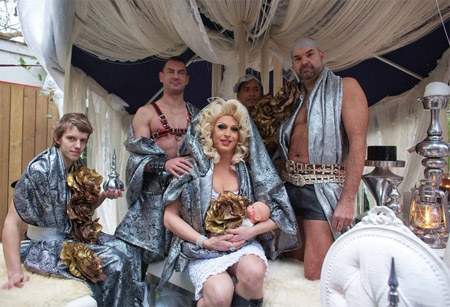 Nun ist and “we have pope” Benedict XVI recently noticed his statements against homosexuals and transsexuals negative. Although this was an understandably great outcry, but it did not mean, that in the speech of non-treated and Christmas – even church Christmas – would celebrate.

So there are some years in the Netherlands, Amsterdam's gay Christmas or also called the Pink Christmas. So to speak, a small winter CSD. Amsterdam has at some point considered, it's nice, would, to profile itself as a little city for gays. Therefore also bear the costs of 15.000 € Stadt.

And as it should be, There is also a picture of such an event, that the press should forward. In this case, it is the portrait of Jesus Family. A picture, so that would hardly be pleasing to the Pope.

Because it shows the child Jesus in the arms of Mary, Drag Queen Miss Wendy. The Three Wise Men and Joseph are displayed with four homosexuals.