or: I want to be part of a youth movement 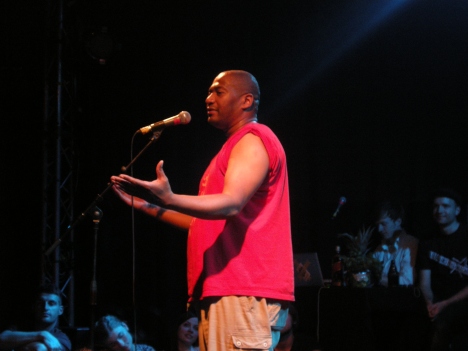 One should always keep an eye on his Facebook account, otherwise it may be, that we overlook a good tip… Today, for example, the small entry: Today: Kreuzberg Slam them Lido. All go!

A look at the website showed me, that the Kreuzberg slam is a poetry slam, and since I've been meaning to watch a, I had heard on the radio one time and found it great.

Well, Lido was another – slightly lower – Level, but in addition there were great, loaded slam poets also some, that spontaneously came forward to participate and even a poet, the first time on a stage as. Although they had a little in-between text problem, but the cheat sheet in boots and plenty of charm, to master the whole. While others would probably sunk in the ground. They do not.

Others did not have these problems, and were clearly not the first time on stage. Da were Slam Poeten, the whole books full texts brought and gave their texts to the best. Were three groups of five slammers and there was one winner, by the volume of applause – or if such can not be determined, was then determined by the number of hands in the audience. DSA klappte immer.

My favorite, of about his youth and his attempts, reported with some friends to win a talent competition Heavy Metal, Although made it to the finals, but had, despite – or perhaps because Rocko Schamoni text similarity – beaten and enter through the “Bayern Munich” of Kreuzberg Slams, the series winner there.

In total there were about two and a half hours, the best entertainment, so before a packed house, that even the stage can be used as seating must. Kreuzberg Slam them Lido, you can visit again.