I can still remember, Janka has complained that after last summer about, she had grown fat and needed to lose weight now…. Now the definition of fat is as absolute matter of opinion and I'm assuming, that there was no one except you noticed then… Unlike in the following drag queen….

…Something like that is hard. I just read a story about Billy Gordon. Billy was famous as the world's fattest drag queen. Unfortunately, as the article without sensitivity was “Freak of the Week” titled, while the story is really sad. 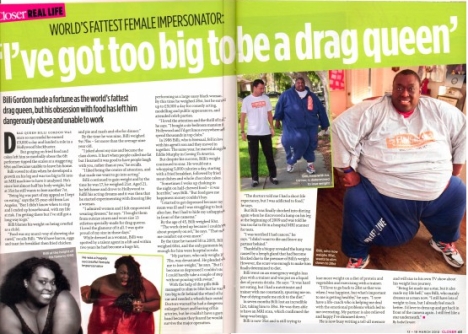 Billy was the fattest famous drag queen and as such. Tagesgagenvon several thousand dollars, Roles in Hollywood, and much honor and fame were so (according to the above magazine) accompanied. Okay, I knew Billy has not, but this has little to say. I am now just once assume, that that's true.

As with many stars, Billy then turned somewhat on the wheel, which probably meant in a pizza wheel with him. When his star appeal consists precisely in, to be big and Fat, then its weight must also keep up… Billy and exaggerated but that did not stop the right way point…

Even as a nine year old Billy weighed about twice as much, as others the same age, but later realized, that it was better, when people laugh with him, than it, So he directed and was drag queen… As the stilettos I wore it remains a mystery although, but she wore it well good. Really cliché, Days salaries of thousands of dollars, Limos (car not drinks), Villa in Hollywood, A movie with Eddie Murphy, Nobel clubs… The whole program. Drinks were then perhaps more cola or similar, because with 45 he weighed about 300 Kg..

Then came heartbreak, Depression and so high weight, that he needed a wheelchair… Logical, so that the drag career came to an end.

Meanwhile, Billy is with much support and training on one “only” more 222 Arrived pounds and 180 it should be. The wheelchair is passé, he can walk again and must be re-Star… For now, though only in a broadcast, who accompanied him during take off. But he wants to lose a little, until they go back to dressen and its appearance again as a drag queen… But he still has not given up. He still feels like a star – deep inside.