One could say: Much ado about little. One could also say: Resounding success. 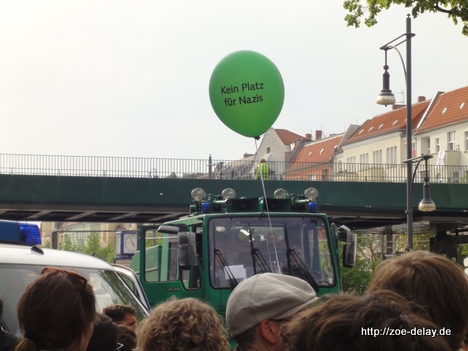 Well Well, I had decided, not so easy to accept it, that rights march through Berlin on May 1 and was about, stand dagagen. Consequently, I browsed the internet and found out, that at the meeting 9 Uhr am Alex war… Pooh 9 Clock – on Saturday … Well, get up early get the best seats. Ergo I tortured myself out of bed, got the leather jacket and steel toe shoes out of the closet, considered the juice on my Iphone and went on my way to the Alexanderplatz. 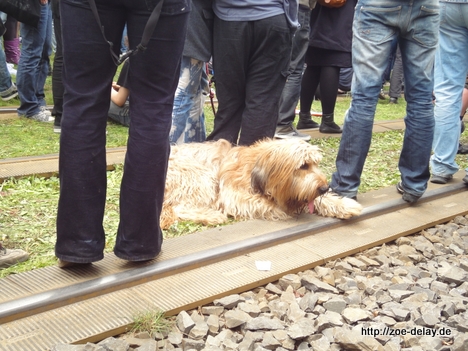 On the World Clock I found also a scattered pile of possible protesters, ein paar Punks, a pair of “the Left” some normal, maybe 70 People – more less. A miserably sad bunch and I had the opinion, that everything would nix. I had a bad feeling. Nevertheless, we were off to the branched underground Ubahnlabyrinthe toward U2 platforms. From all inputs a few people came down and there were significantly more added – a better sense. Then we came to the U2 platform and we hardly came up, He was so full. The feeling was a good.

Here also I met Clara and Sebastian, with whom I spent the day. 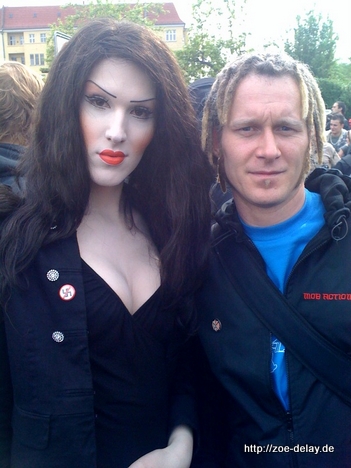 Clara wondered about my change of opinion, I do not consider such a.

I am still of the opinion, notified that a peaceful and lasting demonstration of the police is to be protected and should not be canceled because of some counter-demonstrations – sodenn it is approved.

I am also absolutely believe, that approval of such a demonstration at a symbolic date as the 1st of May should not happen. Generally, I am of the opinion, demonstration that the law also applies to idiots. But it must also be possible. Loudly and clearly and visibly especially, to demonstrate against.

So now I was at the U2 and waited for the next subway, because the first one was completely crowded and the second as full would. They handed us a note in the hand, where our group was registered. Barricade 1, Barricade 2, Main rally .. and so on. We were barricade 1. In super: Cannon Fodder. What the hell. But some people have made all sorts of thoughts. By winding paths, it went in the direction of allotments, before receiving Although there was a crew of a team car, however 6 Officials had several hundred people little to counter, einige Personen suchten derweil sicherheitshalber den Weg durch einen Schrebergarten, where a fence must be rebuilt now. Had the owner been there, I would have him 5 € prep. He was not there. 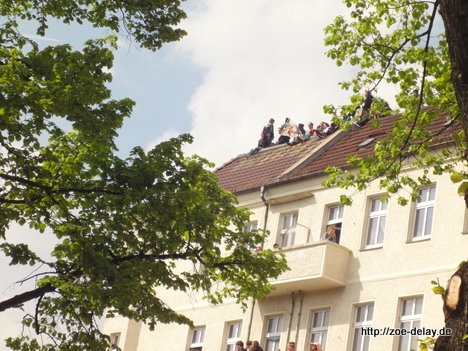 Unfortunately, we were back, So missed the assault by the first police line. When we arrived had already ordered some extent again and would not let us. Here, however, showed quite clearly, that Clara had advantages there. Great in a skirt and heels, Stick with dolls face, but somehow not quite wife up the courage and just went off. Perplexed police officers did not really deal with it and let it happen. Brand: In Trance / Drag / Whatever you have on demos benefits. Good to know. 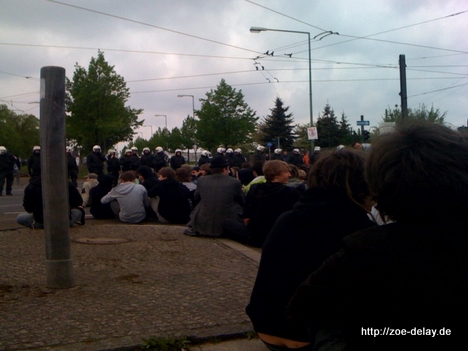 I had to take another with a different entrance to the street. Which there was and there were then only a few officials, significantly more protesters had let happen. I saw myself sitting in the street and looked into a mass of police and a water cannon. It seemed like it had come – and not necessarily unexpected, I was then eventually cleared and then re-city outside the fence, but again with Clara and Sebastian together. 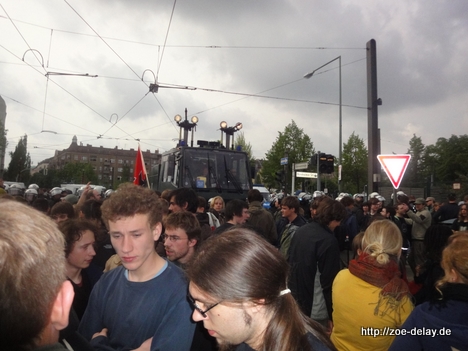 Okay various other ways then led us finally to the corner Wysbier, Bornholm, Schönhauserstrasse and here were many times right people. The organizers spoke of 1.500. I came up short on hitting significantly more. And there were people from all walks of all camps. Punks and retirees, Left, Mothers with children, Politicians, Apolitical people, Antifa, Gays and Lesbians, German Foreign. And, sogar ein Hansa Rostock fan, whom I met, and an image-employee, I know. Told a true cross-section and how. Really many. And so many can really be loud, if they have.

Towards 14:30 then continued the train of the right to march. And it is amazing, What the media are doing today. There was a sound truck, but the medium of the day, the Internet was. Twitter links, Twitter right, Indymedia, old media, Taz and image ticker. What happens, how it looks, what happens elsewhere, and if you just once attracts or impute the Idealismusfaktor lot numbers of all you get to a very good assessment of the situation. Google Maps shows the way to the next point and Taz, Show Indymedia etc, what is a zukommt.Es should therefore about 500 Rights march, and alone at this point blockade was loose 4 times the amount. Overall, about 10.000 towards 500 or just 1 to 20. 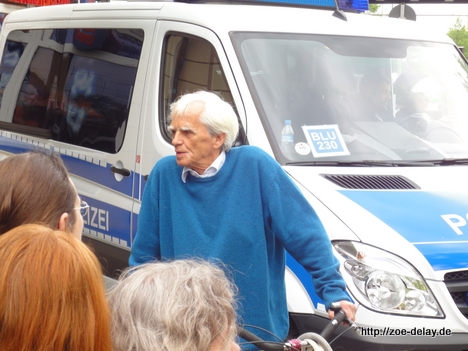 More than just a mascot. Ströbele

Amazingly, I was at this point the blockade not particular strong. Okay, 2 Water cannons and a whole lot of police in armor and pepper spray baton Armed, Dogs etc, but in the case of the case… seemed to me to be the devil to come out not held, when the mass had really set in motion.

You come closer slowly from a distance saw the train, or. you looked closer, the police caravan, a sound truck, many Mannschaftswagen, A police clearing tank, three water cannons etc. For this, the two that were already there anyway. We looked at a lot of water. Far in the distance we saw a couple of black and white red flags, the rights held a short rally. I said earlier, that such a mass of people can be pretty loud, it was interesting now, may be such an amount as quietly. Okay, that the pin is not quite true, but it describes it quite nicely. Strained silence or the calm before the storm… 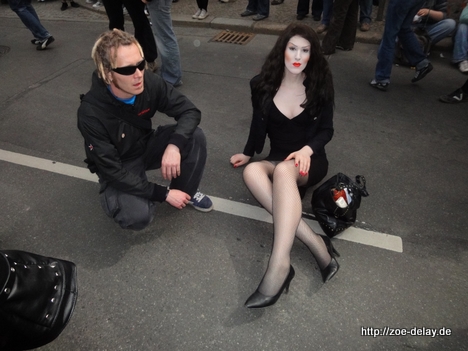 The storm did not. Towards 17 Clock strange happened. The three water cannons and police clearing tank turned and went away the flags. The police were relaxed, the counter-demonstrators remained somewhat, the dogs were Muzzles created and the police also announced the re-release roof, they had occupied. The nightmare was over. 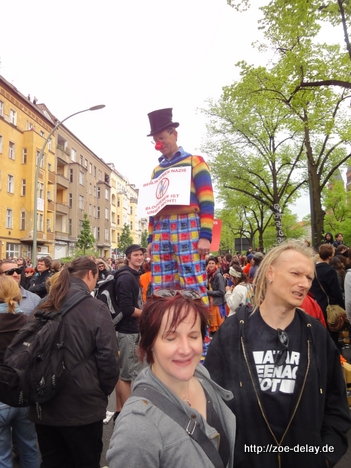 Instead of 6 Miles through Berlin was the demo in fact only modest 600 Meters through Berlin. For this 600 Meters they have hiked 2 1/2 Hours gebraucht.Ein Olympic victory is not that there. Although it myself 10 Has cost hours and aching feet, so it was a success.

Oh by the way, berlin was so not only Nazi-free but also free car, as you can see here. (Provided by: http://twitpic.com/1jxym7) The police have cordoned off well

Oh by the way, as far as the police. Of course there are right there, but the large set of officials are simply poor dogs, that they must be there. Of course, they have from time to evacuate a sit also, but I think the only part geringte enjoys it, To protect rights. Da tut es ganz gut, auch mal in die Nachrichten der Rechten zu schauen.

After some time, it finally went further, get right back, this time after a long time, to stop. This should then also mean the premature end of the train. We were about 30 Minutes, to be explained to us by the police, they could not clear the blockade apparently. What brings the police then ever two water cannons rolling, anyway if they did not want to use this ?

If hot: The blockade should not be aufeglöst, and because it was there, the rights were not. 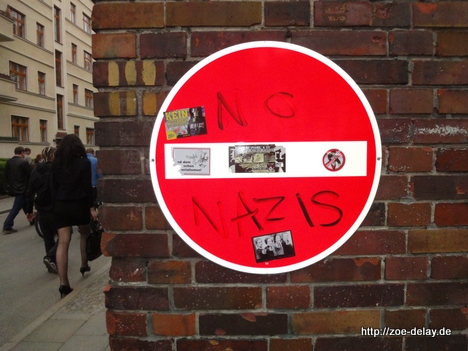 A success. no question.

….oh yeah, a word to the police. it has effectively kept apart left and right, which has at the block resolutions “relatively” reacts calmly and can hardly get out of the rest even with the kind of abuse. She has set the rights on the Kurfürstendamm and soothes the end of the demo with pepper spray. The major blockage has not cleared and water cannons were – I believe – not used. Generally, I was willing to talk about a very good work of the officers in green – until I saw the following:

Clearly, I do not know, Davor baffled, but that is not at all. And exactly this is in memory.