Where Music Travesty, there, settle down… 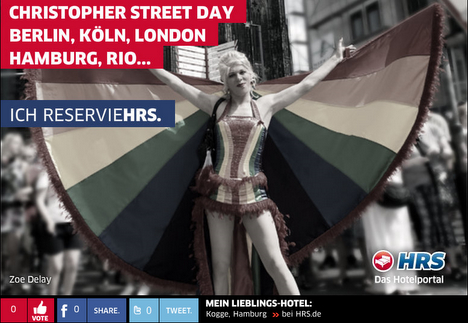 HRS currently advertises yes with various testimonials from Tokio Hotel Bill over Schalke hotel Assauer. But somehow reach those not yet so right these testimonials, so she is currently looking for in a competition for a new star in the sky advertising. 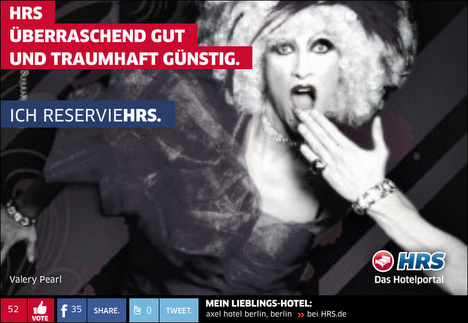 Now it is so, the dass) Drags anyway always firstonce join anywhere and b) they often rumkommen also quite far. Where someone travesty searches, need only be a suitable purse and a good but cheap hotel and you can not ask long drags and fall – by request – one. Otherwise, a good enough reason, a nice event or a Christopher Street Day somewhere in the world. Fits. As long as there is a magnifying mirror and a Late check everything is ok. So it is not surprising, that the Drags not cavort in this competition, but that appears one or the other there. 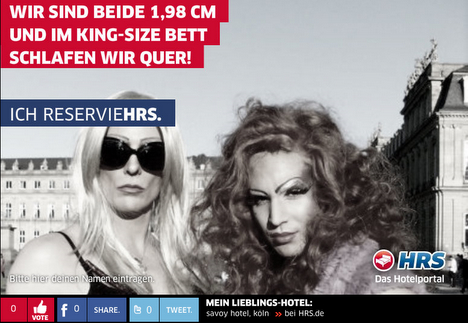 In fact, I've seen there Valery Pearl. HRS – Surprisingly good – and fantastically low. …But I'm afraid of just 52 Votes can tear it will not have much competition in this. Too bad. Valery I would have liked to seen every second poster wall. And the Axel Hotel Hamburg would you “Favorite” Please also. 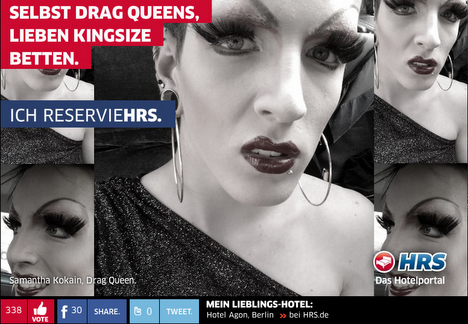 Somewhat less likely to have received two 1.98 cm in size without two girls, King size bed in the sleeping across. Beautiful slogan, but I still had a “and” in parentheses. The king size bed we sleep Que(and)r. But probably no one would have understood.

Has the best chance because even Samatha cocaine, also loves the king size beds. However, it lacks even 68 Vote for the top 20.

And because it is so beautifully simple, I have just made me even once such a small little picture HRS and now hope for some votes from you. Please vote for me, it would be ridiculous, if I did not seek the least Valery yet. Unfortunately, I'm a bit late, for the top 20…. hmmmm let's see.