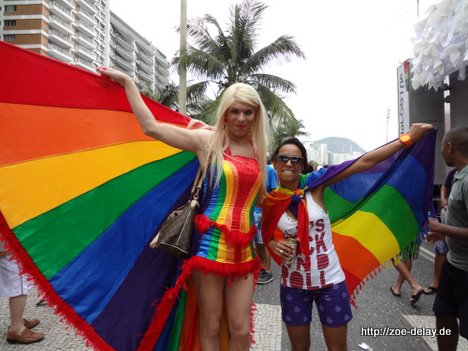 greater in every respect

For several years, so I'm going on holiday in October and trying to extend the summer and at the same time to see something of the world. South America still missing in my itinerary and which city should come as questioning if not Rio de Janeiro. 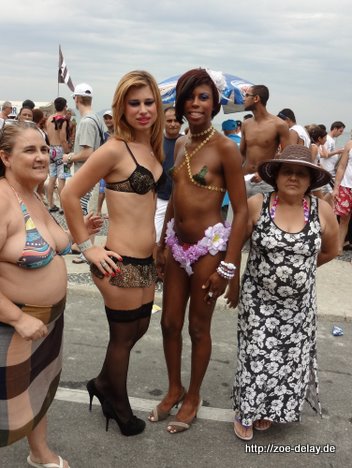 The extension will take place this summer to coincide with the Rio de Janeiro Gay Pride, is actually random and has only set the week of my departure from Germany. …Rio Gay Pride. Far away from Germany… Time, to bring the Zönix out of the closet. In Germany, he has appeared in all major CSDs, But in a new country it is justified. 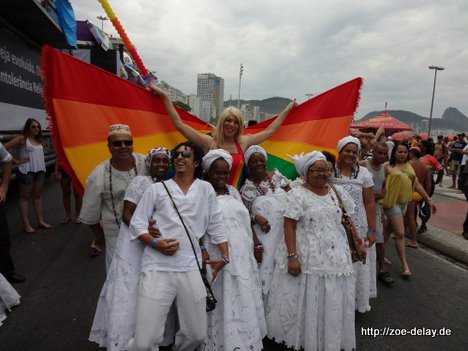 Somewhere I read, dass die one Gay Pride Parade 12 should start at the Copacabana, So I went to shortly after 12 saw on the way to Copacabana? Nix. Kein Troubel, no trucks, no thumping bass and certainly no 700.000 People… Just sooo far away I saw a pair of rainbow flags, which can be seen, however there every day, because that is the beach section, at which the Gaycomunity Rio hits. 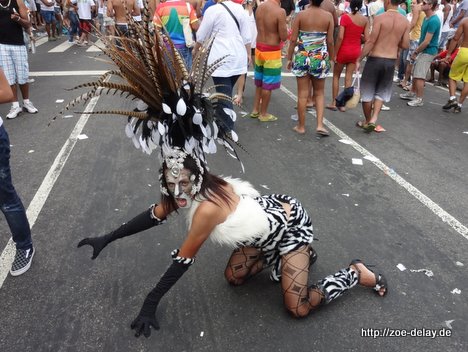 As it was, however, already full as usual, and now I could see farther and hear a few trucks are also soft music, However, that was loud, the closer I was to come (then later as loud, that reported a tinnitus. Half a million people were nevertheless not be seen… So far not. 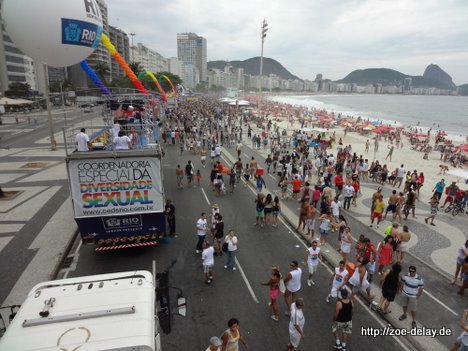 A pair of people, really a few drags and 12 Trucks. Disappointing!!! …But I was just too much too soon. 12 Clock, probably because all of the parties were still sleeping the day before, I have not visited with regard to myself and my appearance in the morning. Had neglected the needs nichh, because the parade sat down only to point 16 Clock actually in motion. 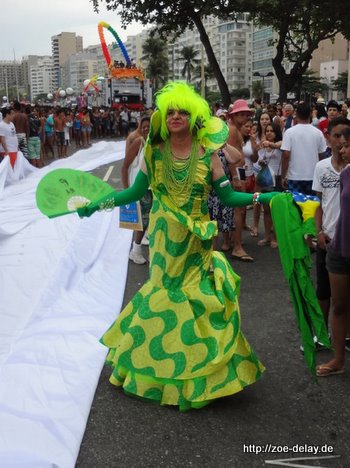 The early but appear also had its good, because early appearance secures all know the best places and hastily I had an invitation for truck number 7 Army time, But I hardly thought, use, because on the road it's much funnier, than on a truck. 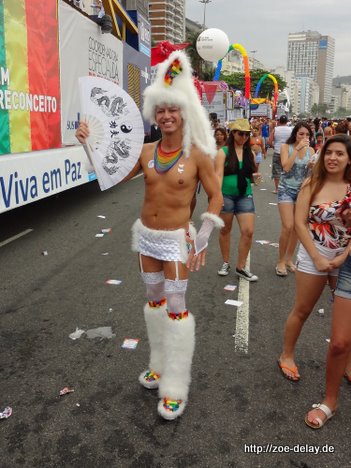 …This is also the Gay Pride in Rio so, but only to a certain degree. The degree of photo requests, namely surpassed just about everything, what I had experienced bisdato. 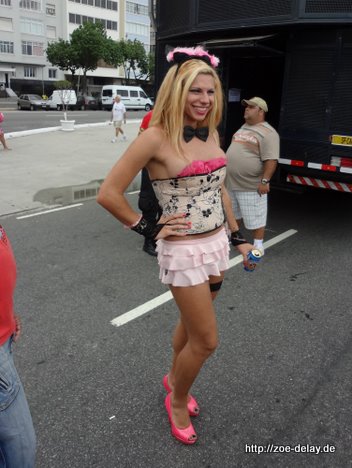 I could have simply 5 Hours can stand up with outstretched wings and I'm sure, I had a cluster of people around me all the time. 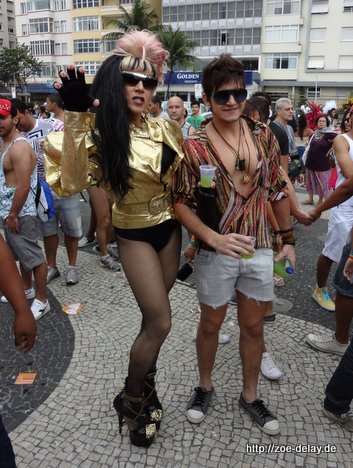 It was really hard, Photo willing to make the boys and girls clearly, I now and then even have to take down the wing – and to even get around a little, I had to keep checking disappoint photo requests…. But what can you do 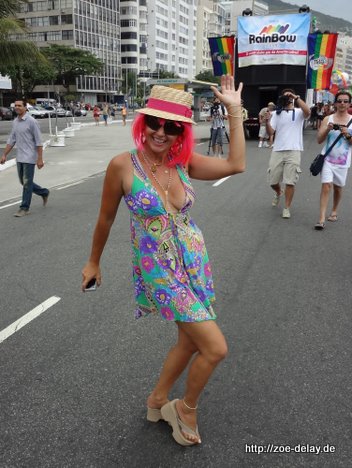 Furthermore, it was from about 14:00 really full and a spreading of the wings really hard. However, this was not considered an argument 😉 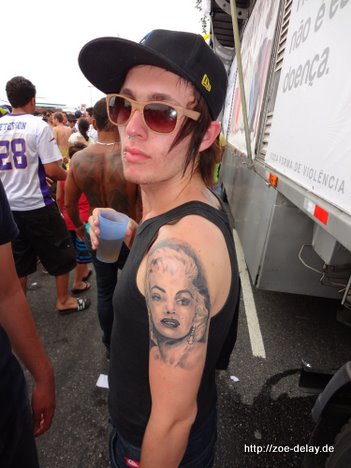 However, before the parade actually started, speeches were swinging. about 2 long hours and that with an expression, the Fidel Castro would probably not have succeeded better in his best days. A real demonstration. 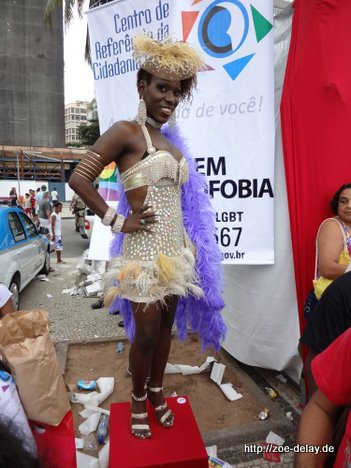 It also give actual protesters, their concerns but unfortunately I did not understand. Two shemales in wedding dresses, for example,. Something like that I know in Germany rather Lesbian. 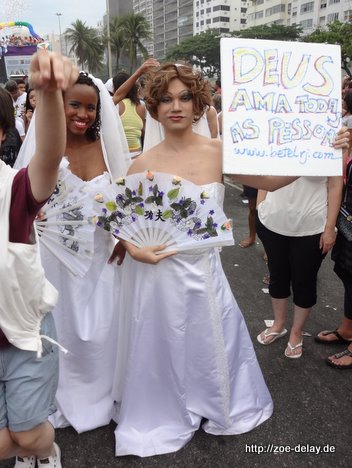 Martial table or a made-man, is probably whether his sexual orientation actually become victims of attacks. I know, that this can happen in Germany. Maneo there can certainly tell a lot, but I think Brazil is already there another number. 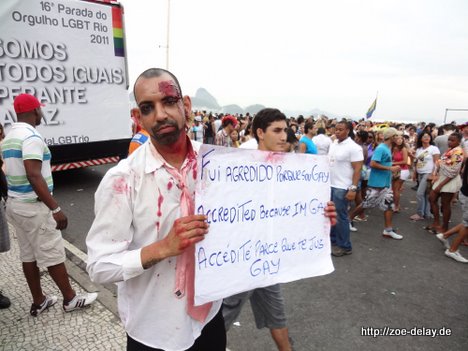 What was Barack Obama, however, to look at the Rio de Janeiro and if his Secret Service knew, where the president has hung around on this day, I venture to doubt times.

In any event, the parade continued to 16:00 on 1,5 Kilometer journey for them about 2 1/2 Required hours. So you can hardly speak of a parade rather than of stationary trucks with loud music and lots of, many people.

But more on that tomorrow