The 1. Mai is in Kreuzberg and remains exciting. Although Berlin is becoming more and more gentrified, include a 1. May still be added to Kreuzberg self.

This year it drew me in the morning but only once after Oberschoeneweide. A district of Berlin, I did not even know until a few days before. The NPD wanted to march there, as a few years ago when they occupied the middle ... or there marched - and therefore the police occupied the middle.

Several trainloads of counter-demonstrators, therefore, set out to the east cross, by the Nazis to be damaged by hail the tour. …. It's always a good feeling, to see so many peaceful demonstrators for a good cause. Real strength. 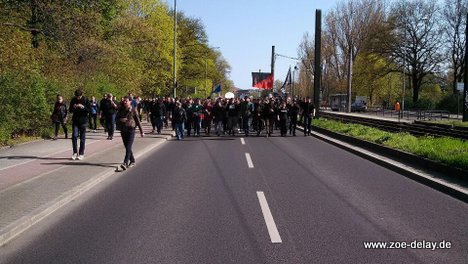 Unfortunately showed, that the demo was not as well prepared, as some years ago in the middle. Went there over winding paths and a garden plot right direction road, both by surprise, a small police line had just overrun, this time was no getting through. Well now .... Allotment can climb over fences. Houses rather bad.

Thus, we were faced with a police clearing tank, Water cannons and police Martians secured Polizeiabsperrung, which was to. No chance and far, far away from the rights marchers. Damage. I think yes, a counter-demo should at least hear, still be more visible ... she was not here.

The counter-protesters were also still pushed back far and I found myself at once in the neutral zone back into my back right, then police and a water cannon, before me other officers , then the counter-protesters ...
I was in the middle of everything in the sun on the road with two other people and "Susie" a girl, that lived there and the Troubel interested in their street attended .... Actually everything nice. At least as , by Susi home had to counter-demonstrators to open her bath and CS spray to wash out various eye, because even though it was a very peaceful demonstration, was then but neat CS or pepper spray sprayed into the crowd ... This tool is devil and is hereby established by many police officers seem very carefree .... 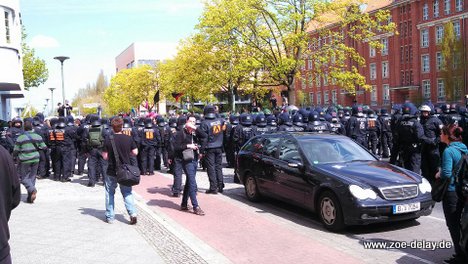 Incidentally, I have gotten nothing, because I always get hold of something. I only got all kinds and a large sun from sunburn.

The counter-demonstration was far enough away from the actual demo and was not disturbed. Success as you can not really evaluate it, I still think to have been right there and sacrificed my day to have it, to demonstrate against laws - even if law does not notice anything .... So I was not completely down, when it came back to Kreuzberg to enjoy the Myfest.