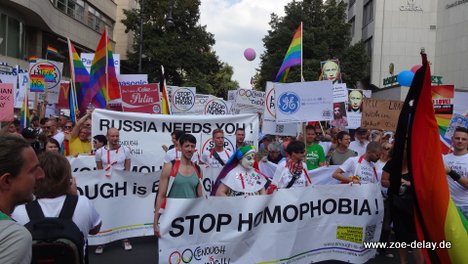 What a powerful message. From a small demonstration, the 7 Have registered individuals, has become an incredibly powerful symbol. Nobody knows in detail, how many people were on the streets on Saturday. Between 4.000 and 10.000 say the estimates – The truth probably lies somewhere in between. But it's also completely irrelevant, if at the end 4,6,8 or 10.000 People were there. Even there were a hell of a lot. 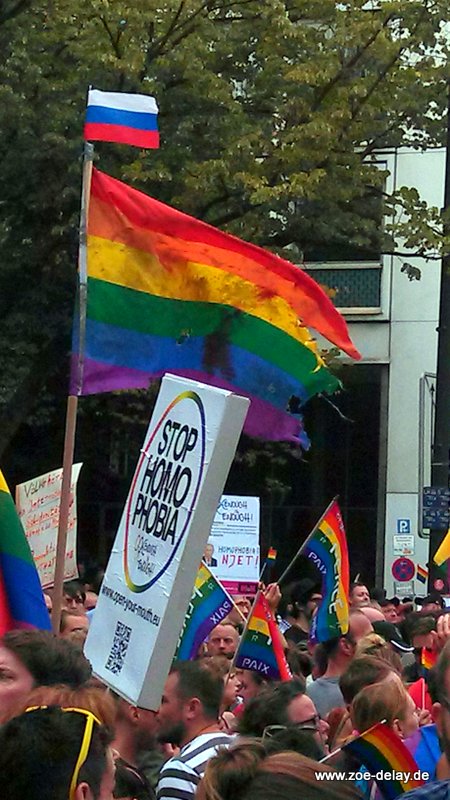 The flag came directly from Moscow

And they were there to demonstrate. The CSDs are of course still a demonstration, but of course also a party behind and on trucks, Frolic, Joy and struggle for the perfect image. In addition, most of the estimated numbers at the final concert for CSDs is because, for street party or standing on the edge. I'm not at all sure, whether on the Berlin CSD were actually more people on the street – But this Saturday were all there to demonstrate. 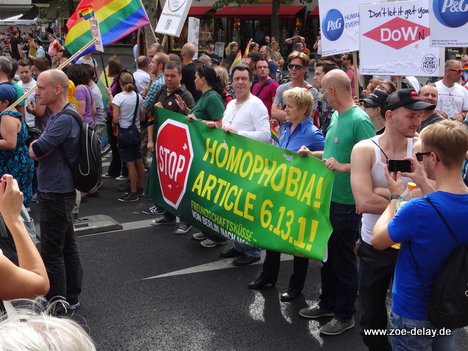 The logo of the Green Party was folded at the request of the organizers.

And – did not feel recognized. While there have been anecdotal banners from LSVD, the green or rainbow flags with the symbol of the Left, but in the back row and not dominant. On the other hand was the dominant rainbow flags. rumored they were in the last week sold out in all of Berlin and honestly, I think the, because so many rainbow on a pile it will probably have rarely been in a heap. True to the motto:

All Berlin a rainbow 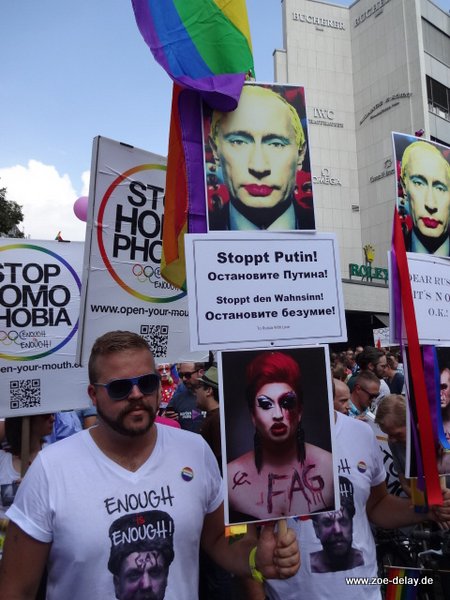 The organizers had, as they began the planning 200, 300, maybe 500 expected. But then the whole has taken such a drive and rolled over all. I'm not sure, if you really do not passed the info about the demo, if one is not somehow in the scene, but the major products in the world, I've noticed as well, as the interview at Radio Fritz in the early morning immediately after waking. When I saw and heard good weather, I knew, It is a good day. 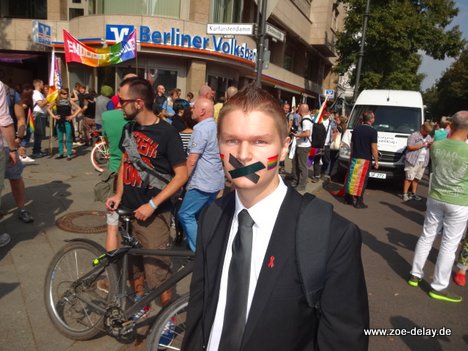 I got ready, took my old Rainbow CSD outfit out of the closet, hung back, the wing, because it was not about the photo but the colors, put me in the car and drove toward the Russian Embassy in Linden, which at the time was still completely un-locked. The following symbolic photo was granted to me and therefore it would not have been at the end of the demo. 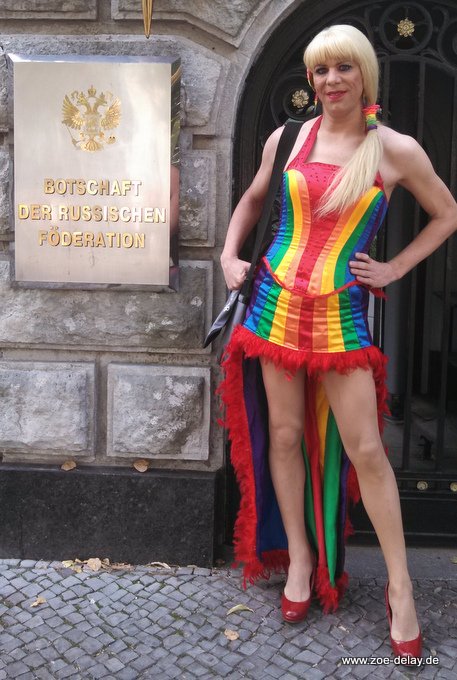 Interesting side story: this image was made by two tourists, I met outside the embassy and begged. It then turned out, that there were in fact Russians, I invited the, to ride with me in the taxi to demonstrate – and the like came along. Ergo: It does not have all the Russians have a problem with us. 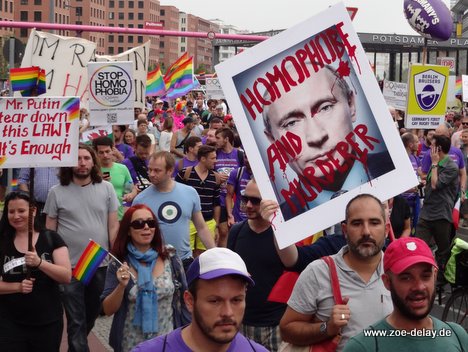 Arrived at the demo showed up pretty quickly, it would be well, anywhere Rainbow, Posters, Slogans. A great picture, that is hopefully arrived at the right people, could, for example, even if the evening news or mirror it online under the table. what can you do. I definitely many, seen many people, which were taken and all the time always wrestled with the tears. 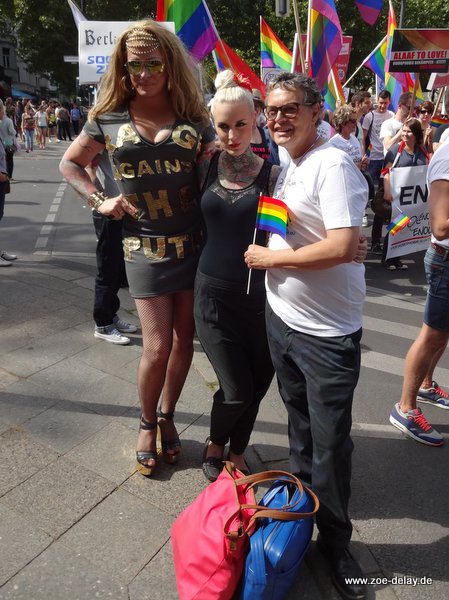 I myself was one of them actually. Tears of suffering are almost alien to me. Not tears of emotion. And at the very end as the demo with “Somewhere over the rainbow ended, it also recognized me. Otherwise, I had more of a smile festgetackertes, when I was waiting somewhere and could not see the front and rear end. 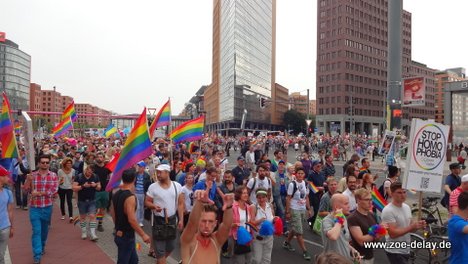 Of course at the end did the feet hurt, and of course I would have liked a little less road, but I see the symbolism of the old CSD distance from Kurfürstendamm via Schöneberg, Potsdamer Platz and the Brandenburg Gate to the Russian Embassy. In this respect “all right” and a great compliment, that it has come to this demonstration. To all. to the organizers, the police and certainly anyone in any regulatory agencies or such. Toll! 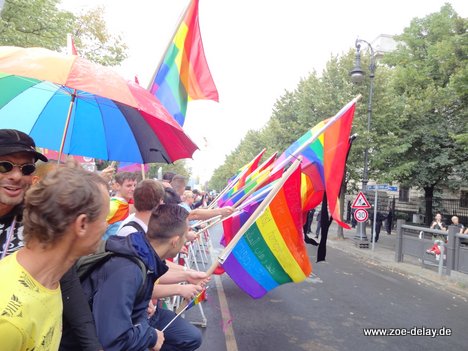 To the large end of the message before this was indeed locked properly, but unfortunately this is probably normal, draw when several thousand people to a message. Itself, if this has a completely peaceful nature. 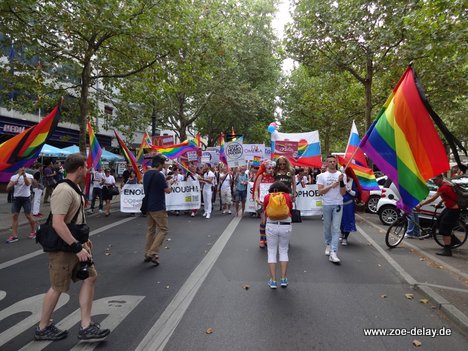 The closing ceremony was also great. Russian human rights activists and, , seized on a TV show with his opinion about the Russian laws, Russian TV, and winter and some more. 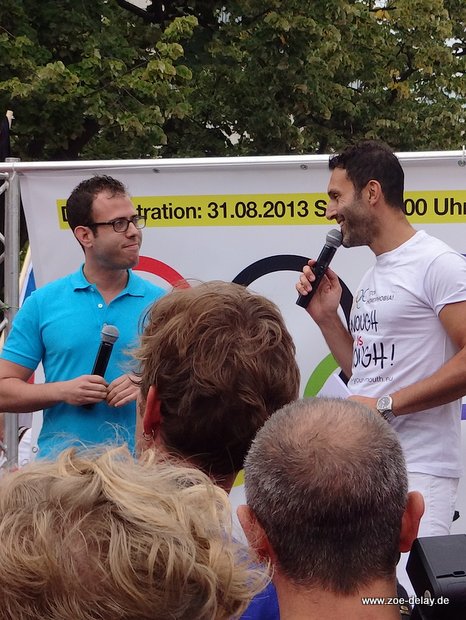 A difficult position, however, had the Federal Government Commissioner for Human Rights Policy and Humanitarian Aid at the Federal Foreign Office Markus Loening. The anger and despair sat on many deep and he had to pay for. Here it is actually hardly blame. His office is a little of the Federal President. He may Dunning and talk but little decision-making power has or. Competencies. But he was there – and he represented the Federal Government. 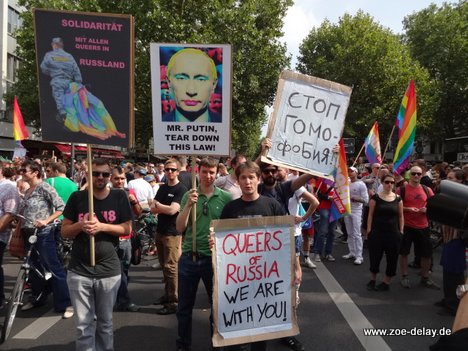 The Highlite but, there was talk of co-organizer Alfonso Pantisano. 16 minutes, you should listen to views.

Clear, There were also a few things, did not run so, But these were all minor, which did not fall to be compared with the great organization and the great characters in the world. The whole ended with grave candles in front of the embassy, filed with rainbow flags and with a good sense of emotion to Judy Garland's version of “Over the Rainbow”. 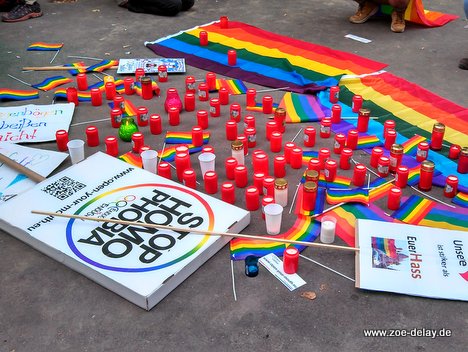 Next Saturday then you can kiss Add to meet again at the Russian Embassy.

But a story needs to be told. The history of the flag, at the top of this article, which unfortunately I can only play very incomplete. 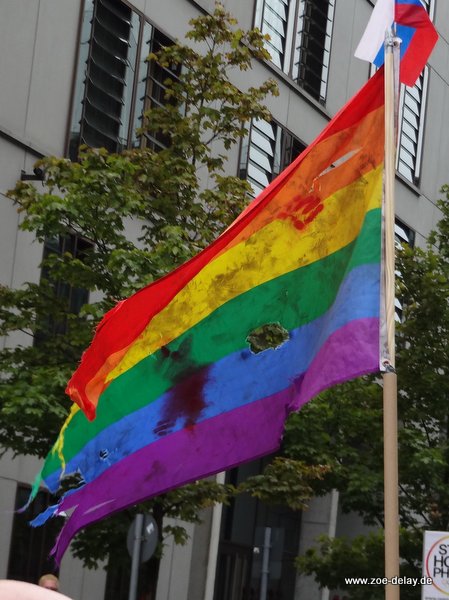 This flag has seen much

I noticed this very battered rainbow flag in the demo. Dirty, torn, covered in blood and I wondered, what it probably would have to be. ..so I asked the carrier. He was Russian and could only communicate with me broken. But he told me, that this flag is not art. She was genuine and came directly from Moscow. She was at various demonstrations in Moscow and it looks like, BECAUSE she was going. Was dragged to her, People, they wore were beaten and jailed. But the flag is still in the process.

Although battered but not destroyed. …and it blows still defiantly and proudly wearing their colors in the wind. yesterday in Berlin. 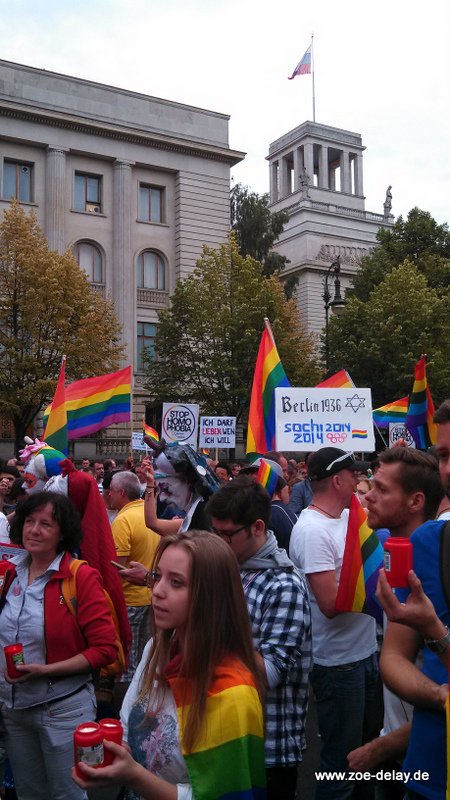 For me, the symbol of the demo.