After a long time I must go back to post an event announcement, that sounds extremely simple tension. It is about The Rock Ã¢€Ëœn’ Roll Freak Burlesque Circus. What exactly is hidden behind it show, but the connection from Circus, Rock’N’Roll, Freaks, Roadrunners Paradise und The Teaserettes, aus Squeezebox, Eve Champagne just sounds so, as you should not miss this event lassem 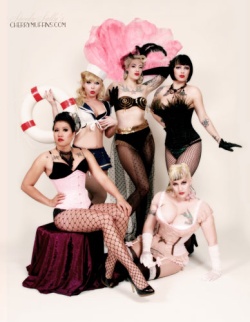 Women, Freaks and sensations … Come closer ladies and gentlemen, and they were like, when the stage is transformed into an arena of Roadrunners Club …
The Teaserettes, germany senior burlesque comedy troupe invites you to a unique spectacle, with artists and burlesque performers from all over Germany and of course ROCK'n'ROLLLLLL….Sexy tiger jumping through flaming hoops, strong men with muscles mountainous, three-legged ladies with long beards….

The Teaserettes – History
Ã¢€ËœWe tease to please…&#8217;, True to this motto, have 2005 found five young women together: Ã¢€ËœThe Teaserettes&#8217;.
But first, back to the roots. In 2000 started Actress Sandra Steffl (Sandy Beach) in Munich, the young comedy show Ã ¢ € ËœTeaserama’ in the legendary Strip Club Ã ¢ € ËœSchwarze Katz. Comedians like Martin Schneider, Mathias Seling, Instructor Schmidt and many more took turns on stage with the house strippers from. Environment, Strip comedy and performances were at Skurilität not be beat and Ã ¢ € ËœTeaserama’ quickly reached cult status. Frl. Beach flirted already at that time so, eine Ã¢€ËœBurlesque Truppe’ to establish in the classical sense, but unfortunately it was not the right Ladies in prudish to Bavaria. 2004 closed Ã ¢ € Ëœdie black cat ', die Stripper Within struction in Fixed Income, the comedians were all famous and Frl. Beach pulled it together baby belly in the capital.

After maternity leave and abundant expression of the nightlife it was time. There were four interested Burlesque recruits, all of which had already been the subject Contact. Im April 2005 was the first Ã ¢ € ËœTeaserama it’ in Berlin and was also the launch of Ã ¢ € ËœTeaserettes'. Cherry Temple, Miss Behave, Litschi Lu, Bunny Clyde, Sandy Beach and rocked the house. Immediately afterwards followed video shoot, Photo shoots and other appearances, z.B. im Sage Club, Roadrunners Paradise Club, White Trash, Tabou Tiki Room etc.

Initially the show consisted mainly of group numbers in a classic 50s style, now numbers have been extended in the rock and punk. This results in a repertoire of classic burlesque dance to extremely trashy numbers, but always with a twinkle in the eye. As with the original models of Burlesque it is the Ã ¢ € ËœTeaserettes’ not the representation of perfect bodies and plump sex, but the caricature of popular stereotypes (Men and women) and self-conscious about showing humorous eroticism without pointing the finger. 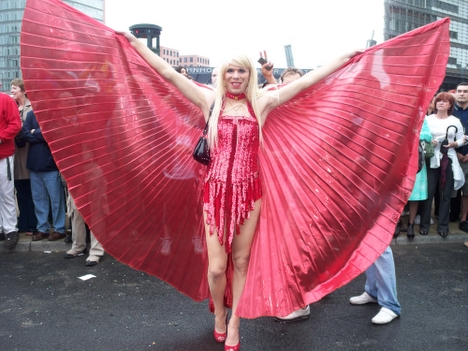 You've shot images, a gallery found a blog or a forum with pictures are published in the pictures? Then they sign me, I link you happy here. You maybe even the red phoenix somewhere on image, then you can sign a fortiori, because I am and I am grateful for every picture of me:

So far there are only boring DPA images, So load me know, where can I find better pictures zoe.delay @ gmail.com or simply leave a comment below here

Images from the CSD Berlin in the network:

oh yeah and before I forget, the price of the worst photo montage to the Berlin courier for the image in Post. Worse is in! 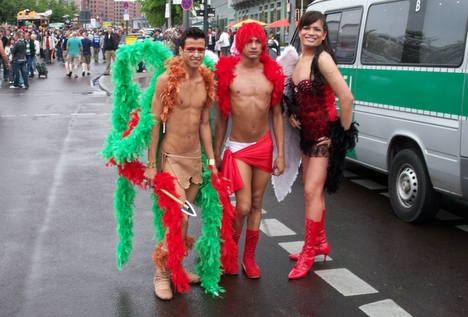 Now I am doing something very naughty. I write a post about CSD Berlin Pictures, is only for search engines because.

From past experience I know of course, that immediately, when the CSD Berlin 2008 is closed, come the first search engine queries in on the subject. But when I write a post until he is maybe about CSD Berlin found several days later and the images will be too late.

Therefore, there is already here Sunday with a list of internet resources, where you can find videos and pictures from the CSD in Berlin.

And who himself has a contribution or an image gallery, the may leave me a quick comment, I link then – and am of course also a link…

last year I was found among other things the following terms:

May be Google me and hold me fast indexing.