(2) The Berlin Fasionweek shows twice a year a mass of fabulous fashion shows and great designer clothing at various catwalks in Berlin. All well and good, but as long as no one proves to me otherwise, I gaube that the exciting and thrilling the Underground Catwalk is. 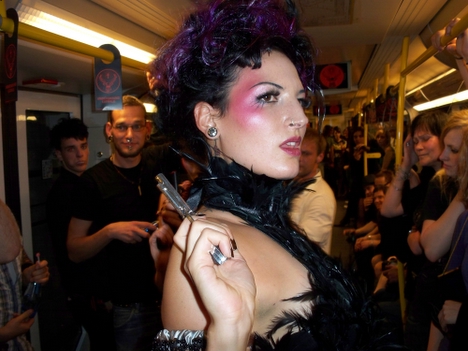 In a – partially propelled – often standing underground young designers show their latest creations to the underground scene from the fields of paint, Leader, Gothic, Baroque, Punk. Sexy Dresses with corset and high heels. Models von Rockstar Models.de were not about any Heidi Klum Anziehpüppchen but fits with tattoos, Equipped piercings and own broadcasts. Completely from the typical chic of Berlin Fashion Week, far away from all the Joop, Gucci and other designers – and the current models there. 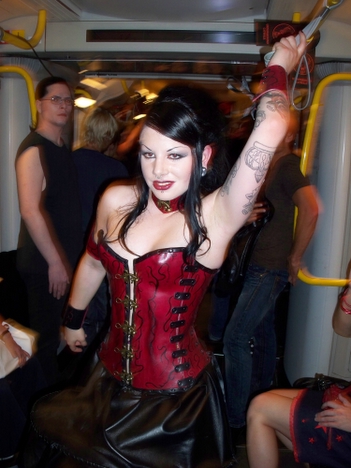 But probably one comes to these other fashion shows and not the Underground Catwalk is always with 15 Admission € for paying guests still a real bargain. After I last year was there alone, Sheila and I hit this year there together.

All were in the subway, the doors closed, and the music started and the actual show. The car drove off and everyone could be happy, when he was able to get a card… And it really seemed like so ago, as if the organizers behind this time a few more visitors to the web. It was more crowded and less space for the models to run. However, this did not detract from the matter. 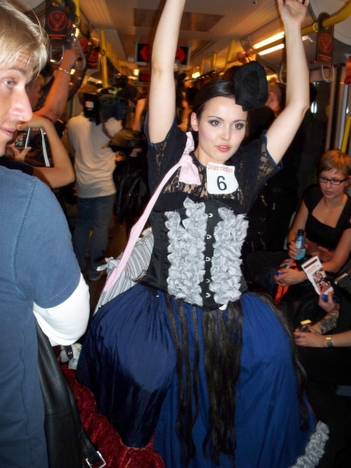 The “Catwalk” was constructed, that each 5 Designers should in turn and walk back end of the central Bachtage car in a direction to subway, while the others ran in the other direction. In the middle we all met again and it started all over again – only the other way around.

And I was in the first slot is actually a little disappointed. Seemed to me the first five creations were worn by the underground but mostly rather arbitrarily. Not boring, but not really tingly. Many of the pieces were T-shirts with tattoos, Plants, Ornament or rock-Print. 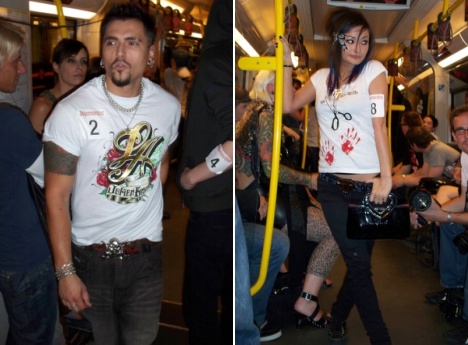 So pieces, I have a similar kind in Ad Hardy, on the merchandise stand irgeneiner hard rock group or – sad but true – can get to almost any farmer's market. Hardly anything, which one can really inspire me in a fashion show. 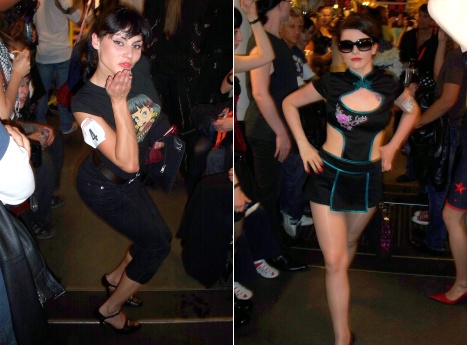 But after the candy girls candy and submitted by the sponsor Jägermeister came into its own and distributed refreshments to the guests, it was again – and right in my eyes the more exciting creations going on. 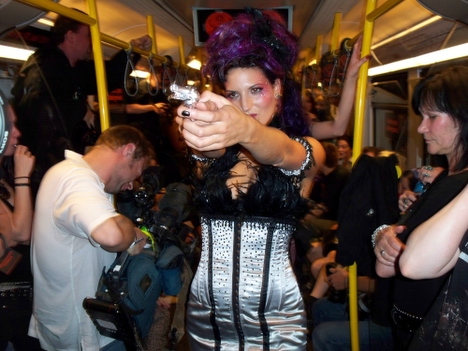 Apparently the models needed to be a little einzulaufen, not only because the pieces were punctured Direction but also the way, as they were brought over. From now on, was actually on the subway bars geräkeln, pulled on the handles or when the situation required sometimes thrown to the ground. 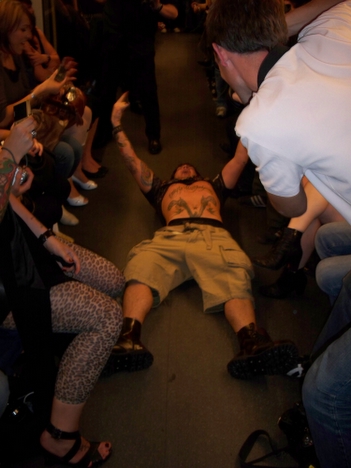 It has flirted with the cameras or it was put by the models Redcat7-dollar bills in the various sections. This part was loose and carefree hotter than it was in the car anyway. 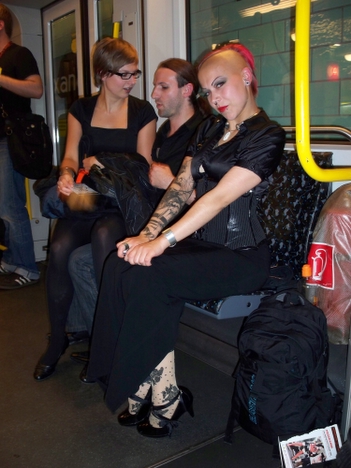 Only Guest or model but?

Unfortunately, even the best show comes finished, but certainly I will Unerground on the catwalk 2009 be born again, and it also still the after-show party at Sage Club. But more on that tomorrow.

My Conclusion: One must necessarily have been there and my Favourites were the red corset corsets from AMF and the girls from Redcat 7.

Actually remains only the question open, Sheila and asked me was…

Why did not you run there actually?

And, why not? The question is more than justified.

To the after-show party

Some would say, I was a bit chaotic, others would answer this, that this would not be true, because I was VERY messy.

By contrast, I would argue, the course that is all nonsense. I have an improvisational genius, I can adjust very well to new situations and ultimately almost any situation somehow manageable.

The truth is put together from all these statements.

And, I'm messy and I trust the absolute, I can somehow cope with all situations. That always brings me back to unplanned situations, I need to somehow overcome. And this then requires sending you a certain talent for improvisation.

At least I'm trying, I only own it to play a trick. Unfortunately this is not the, if people just had to do with me. On the way to Nuremberg that was just Sheila.

So we had made it almost, to cope with our morgentliches chaos where, to our train to Nuremberg reasonably on time reach. This problem was solved by us so.

The train ride itself was fairly boring and uneventful. Unfortunately, the chaos of the Deutsche Bahn was the result, that we do not go as planned in Großraumwagen, but drove in a locked compartment to Nuremberg.

Well not quite, and drove with two men and an elderly couple, all of which were quite stiff. Whether the reason we were there or whether they just have a boring life, we could not really find out.

Were less boring us, because I had to confess, I had no plan, at which hotel I had booked. Name, Address, Phone, all of this was at home on a printout warm and dry, as they say.

Unfortunately we have, that the route Hamburg – Nuremberg it comes up with one or the other problem-. Hardly anywhere there is UMTS. We felt at the time of 14.4 Back to modem. Laaanges dial and extremely boring building. It was graumsam. Shortly before the landing page has built, came to us a second disadvantage of the route in the way. TUNNEL! Viele Tunnel! And so when your internet connection.
Effect: all over again. A half to three quarters of an hour we tried it, then we gave up exhausted. Why does the web really no Wi-Fi?

Has saved us at the end of the internet cafe flat-s at the station in Nuremberg. As we only had solid, when there was no Internet? I really do not know. Probably because it was a precautionary measure slightly less chaotic…
We were definitely out quickly, I in Hotel Leonardo had a room booked.

Btw. why I actually just today learned of Porter service of Deutsche Bahn.

The costs for the first two pieces of luggage läpprige 2,50 €. What a glamor factor. Should I once again train travel, then I'm doing with a suitcase carrier to the taxi driver takes over the job.

Sometime around three clock in the morning we came back from our trip to the King Calavera, only to know, that we would have to get up at seven, if we are up to fourth 10 wanted to create, gedresst to climb the train to Nuremberg.

fast as possible skirmish excessive styling and at the very latest quarter to 10 ab ins on an Auto, unscathed, relaxed and especially early to arrive at the station. A great plan actually.

And, unless Sheila would be. They will deny it in her blog, of course, but you think nothing. Until we have to get up our plan fully complied, Unfortunately, the good then but has taken far too long in the bathroom…

So I had too little time. But maybe it appeared to me also just as before ;.) In any case, everything would have been great, if Sheila would not have been sometime in the door and looked at me with big eyes.

Rather than “You hurry NOCH 10 Minutes” or “'d Better hurry up” either “slowly it gets almost”. No she said

I was of course far from being finished and styled it was now slightly panicked. Now it was actually moderately combat-. The last scrap of makeup were the face, threw the makeup jars in the bag and all together in the trolley.

And I forgot about everything, what else needs to.

All this, of course, I realized later in Nuremberg our hotel, because now there were more important firstonce. Was important at this point firstonce, to completely panic, like headless chickens running around the apartment and inclusive us to ship everything myself as soon as possible in my car. Sarah said someday, I would like to quickly and drive a car. This time I proved it. We certainly had no 20 Minutes more.

Fasten your seatbelts and get the seats in the upright position.

Somewhere between Walter Röhrl Driving style and low flying Tornado we approached the station. Fortunately, that without us, the police waved out, we arrived safely and without prejudice, not by the target but also relaxed and in good time at the station.

You could call it luck, or enfach absolutely suitable time management, because at the same time as we entered the platform also drove an ICE to Nuremberg. Hardly 3-5 Minutes later, when we were by the train on the way to our compartment,we were on the road again. To Nuremberg