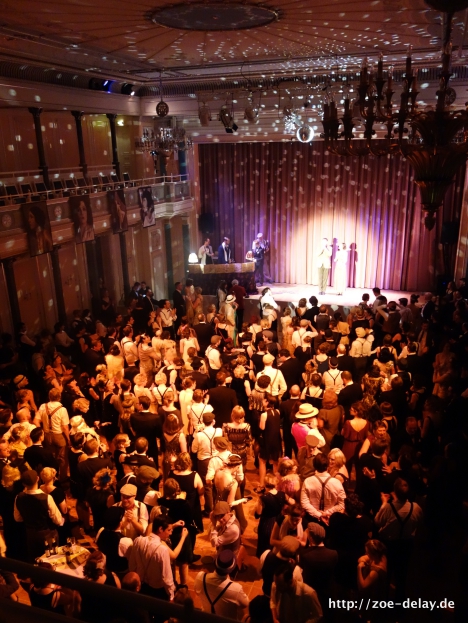 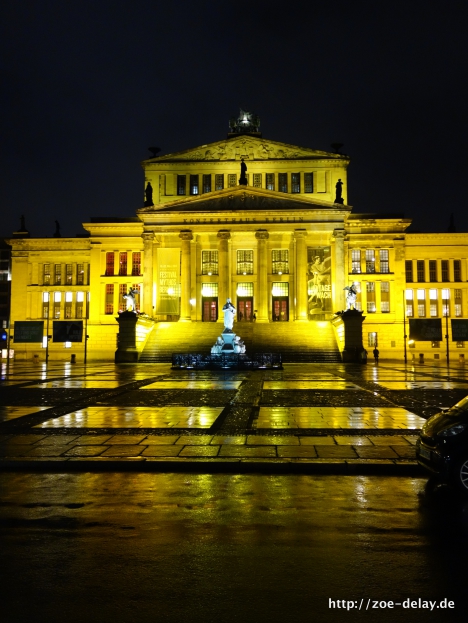 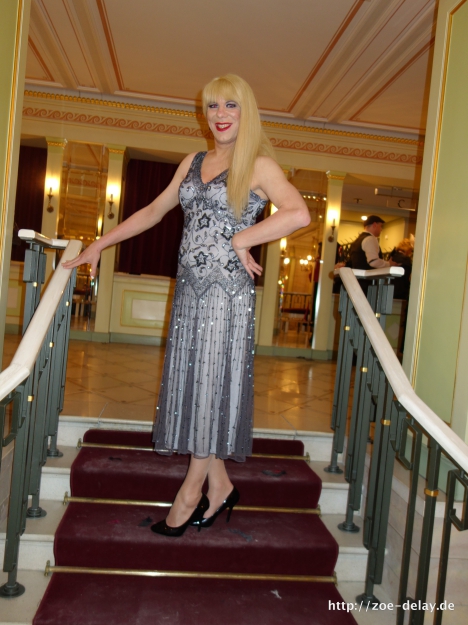 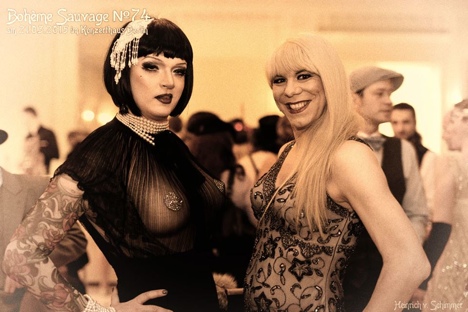 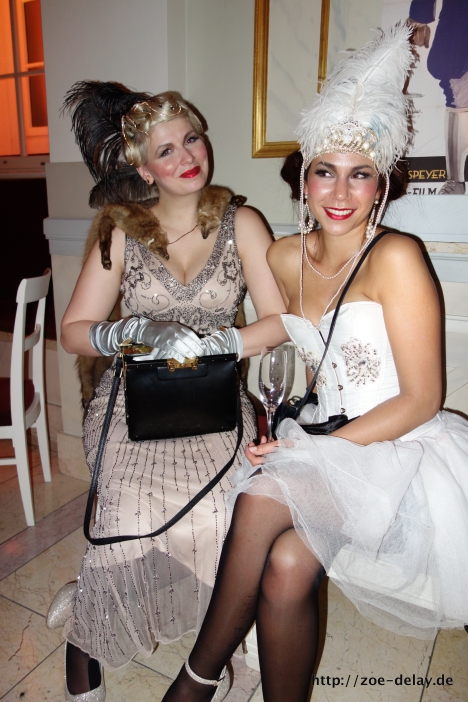 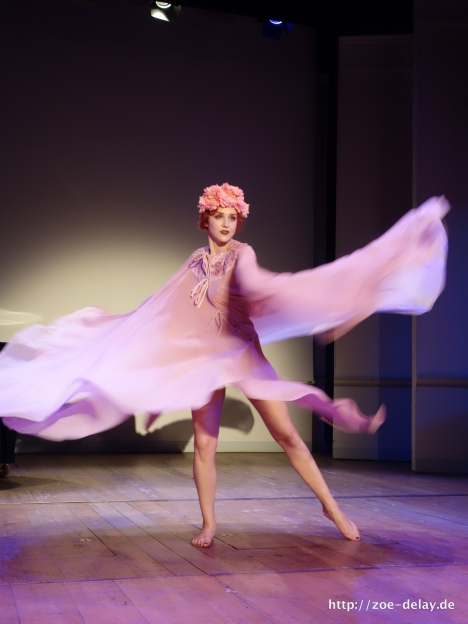 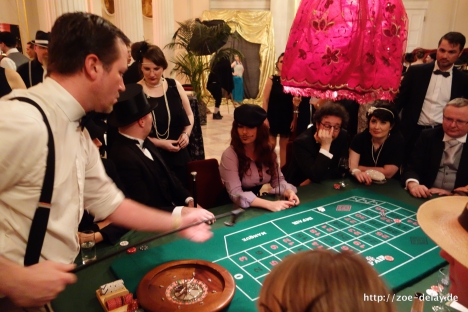 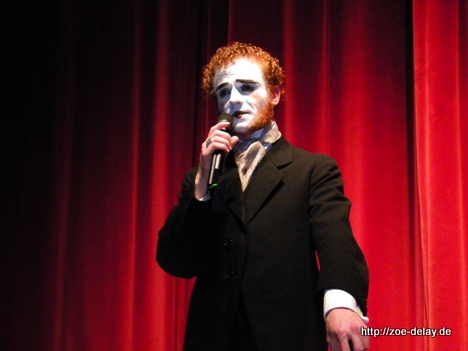 I had not visited for a while Boheme Sauvage, because something was always something else or otherwise not fit. When, however, recently found a formal and especially personal invitation from the organizer of the 50th anniversary Else stainless steel tube via mail in my mailbox, It was clear, I would definitely visit it again. Not only because the Boheme Sauvage an institution of the Berlin party scene is, but also because of the many nice people there always. 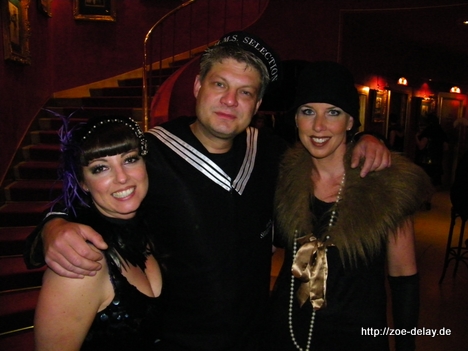 But must come ON to the Boheme Sauvage is firstonce come FOR Boheme Sauvage. And since I'm currently without a license and not to strain Sheila unduly with round back AND diversions, I took the bus. 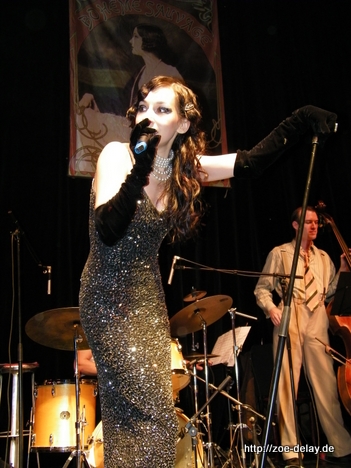 The schedule spoke of Potsdamer bridge to replace the bus and then about 100 Meters need to run up to the winter garden… Sounded good. drive much, run a little… Unfortunately, I was not with, that the bus driver did some girls like the, them about the Adagio 500 Allow meters out before the next bus station. It stood as the next bus stop “Potsdamer Brücke” and the bus stopped.. So I got out and was about 500 Meters to run… Once there, just drove the bus away, So I ran wine more times.. again about 500 Meters to the winter garden. So I teetered on high heels half a mile through the city. In my best times (on spikes and tartan) hab ich da mal 3:something used, on highheels somehow more… what the hell. 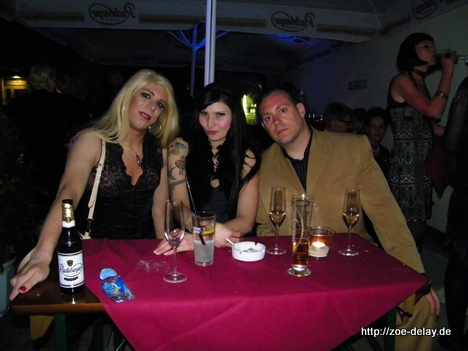 Arrived in the beautiful winter garden but everything was good. Eine tolle Location, As usual, great costumes, great people and great music, where you have to say, that the music this time was a little better, denn mit der 50sten Boheme Sauvage hat sich die Party eine Hausband geleistet mit Madmoiselle Chloe und ihren enfants Terrible. Chloe was already at the Boheme everything, Hostess, Belly box girl, Femme Fatale counterpart of Coco. Actually, she is a singer but with a great voice and incredible stage presence, and if they then meet and Coco on stage singing and tap dancing, then meet two Rampensäue, as there are not many in Berlin – toll. I Like it!

This time, there was of course again a burlesque performance – this time from La Viola Vixen Brisbain or from Bristol… (Madrid suppose Mailand – hauptsache Spanien 😉 ) …So it was definitely not from Germany. She brought a nice feather fan number, nothing really new, but very clearly. For this example, I love Golden Treasure, which really brings out even more of a Feather Fan number something really new and different. One just has seen a lot.

That is also, was Scarlett o&#8217;Honey, with whom I have talked quite a while, said, We have just seen a lot and there are still many people, for the first time to see a show or do anything that might not even using the term Burlesque today. The come with her still relatively common, wenn sie in der Rock’n’Roll Herberge arbeitet, the Berlin “Cog”. Sieh an, you can hardly believe it. Alles gute von Hamburg findet irgendwann nach Berlin 😉 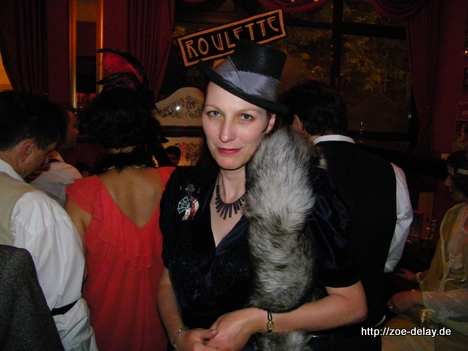 So zum Beispiel ich 😉 und Swingin Swanee, that looked so completely different that night. Someone said to her, she had dressed up as a woman this evening. It must be said, that it is rooted in the swing and hangs up usually with flat cap plates. But not today, denn der Boheme Resident ist yes Herr Dr. Hirschfeld. Next to me and Swanee but also comes Hedoluxe from time to time flown in Berlin. On this evening, but less silvery than normal, dafür auch ein weniger normaler als normal 😉 Ich muss gestehen, I knew him only, as he pointed me on it, I know him… Shame on me … 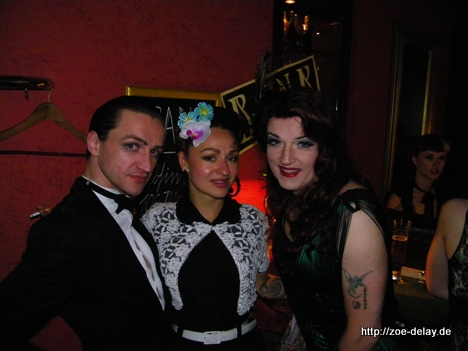 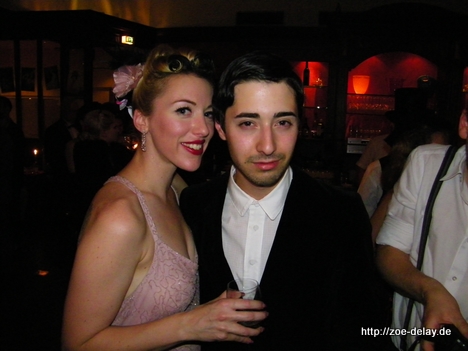 This evening but there was something new for. A camera crew stationed themselves, by flipbook scan of a, Sheila and I were wide but almost beat us, was the cinematographer on space and not just as they (suspected) was there again, we were not in turn place… So nothing was out of the flipbook. 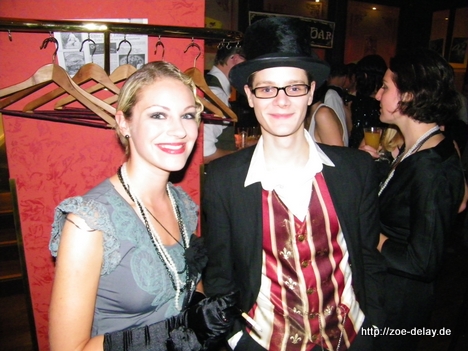 But who knows?, maybe next time at the Boheme Sauvage. 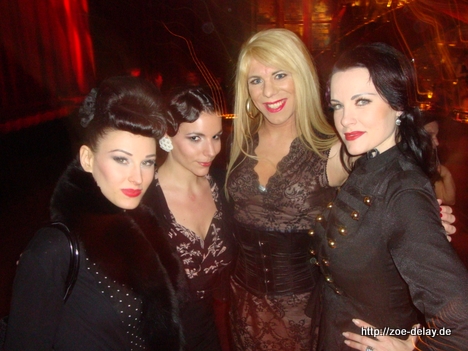 The conservatory is again fully operational and as this is still one of the most beautiful event venues in Berlin and the bohemian also one of the finest of its kind. In addition, you meet a lot of nice people there always, with whom you can talk wonderful…. And take pictures. 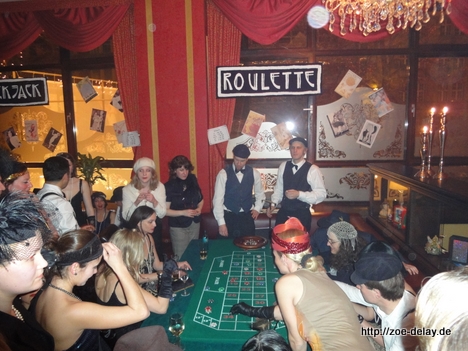 For example, this wonderful picture, that would have cost no less than a full cost Cuba Libre and conservatory almost a bank… I'm not quite sure, how could this happen, wiege ich doch mit meinen Zwölfeinhalb Kilos ganz ganz wenig. I think so, that because a technician has sloppy Yesteryear, mine is inexplicably different. 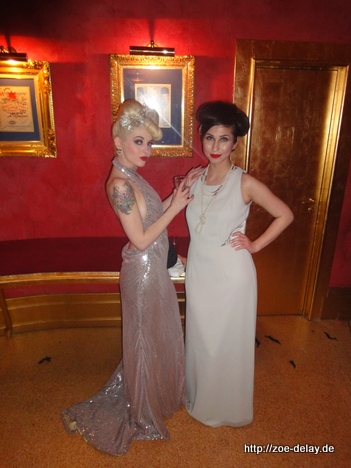 Is as inexplicable to me, how we got away this weekend so early, that we have almost unlock the conservatory strictly speaking we were so early on the Boheme, that we almost could witness rie real twenties. Quark, but for a drink, together three pretzels and a praise of the nice barmaid handed it long before the room was unlocked in the conservatory and the usual dance course began… 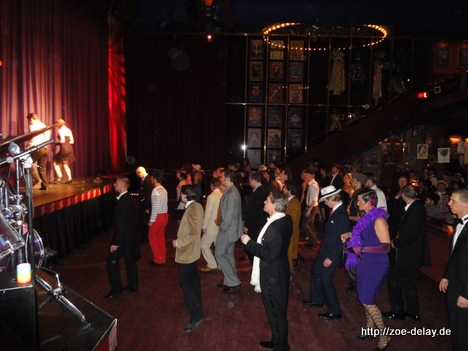 We had also never done, because we were never there at the time, on the former, we did not change this message also, They looked a little amused, a little amazed at the dancing-learning materials. …But you have to admit, that we did not join in extra-, because we would have certainly given a very bad image on the dance floor… So we left it rather. 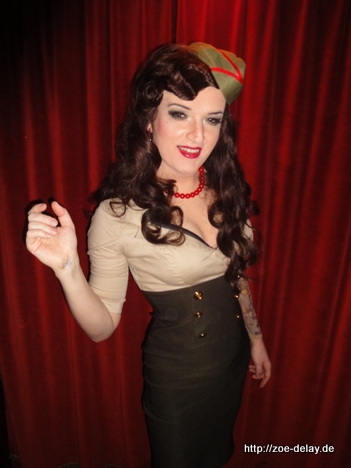 Instead, we rather looked at the new number of Julietta La Doll to. She recently told something by a large keyhole she wore this time rather a very small to classical orchestral bombast Music. Something new and very very beautiful. Their second number was unfortunately so late, that we missed it, since we were already on the way – where we lingered for a while but this time in the conservatory and us with many pleasant people.

For example, with Lidia Buonfino. While we walked forward from massive parties on the way, entertain us but we have never. Pity, because you can be wonderfully entertained with their, also it is already really ventured far – and she was glad, To leave Hamburg, But what had been still better, than Munich… Nundenn we met in Berlin. 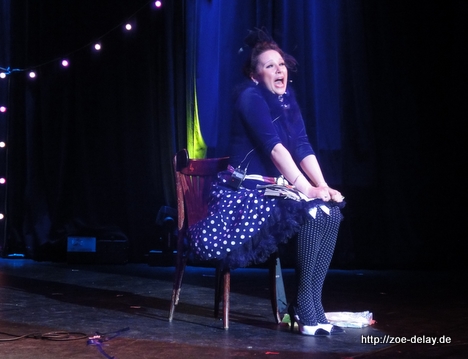 Also, I met Marén, Although we spoke very briefly, but it was important, because I learned, that makes them great masks and wigs as well great. Both I can really use for Artists Charity Night in Zurich. Quite expensive though, but obviously in great quality. I believe, I have to haggle because once, because both fits exactly to my envisaged costume for the evening… Let's see.

Interestingly, I've found this evening, that give me the Artists Charity Night also restricts some, I'm there in Zurich, Unfortunately I missed the first Boheme Sauvage in Hamburg. In evil & Dangerous…. The Swing Royal in Hamburg has since been worked out very well and I would have liked to see, strikes as the Boheme in Hamburg… Now I'm sure, will be determined auh a second there, I have just come.

In any case, I felt a little tired after the winter garden, Sheila even though Janka bagged and drove to Cookies. I called my bed. 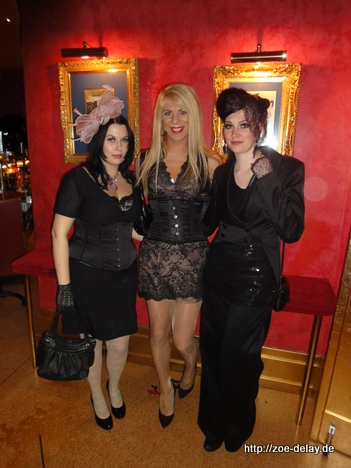 At the weekend the legendary Boheme Sauvage was once again 20s party and they should be this time in Neukölln. 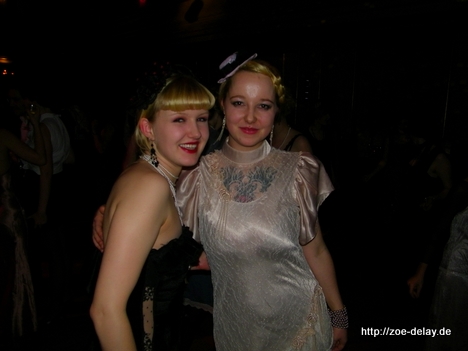 “Neukölln?” Is now some people issues “Is not that just as the legendary district of Berlin, in the one should go only with police protection – or better not even the, da man dann ja auffällt – So better not should go”? Exactly the…

But as bad, how the media want to make the world looking, Neukölln is not at all. There are even nice corners, not even know the Urneuköllner, such as Home Neukölln. …Has nothing to do with port, The nearest water is far away, but home all the more. ..And localism for Neukölln. 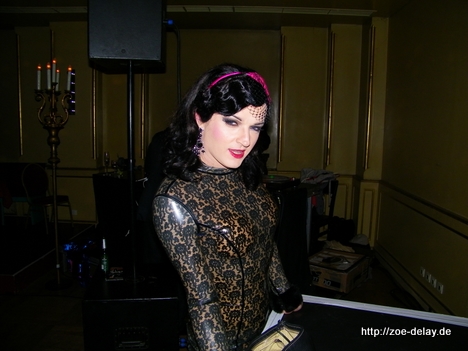 The Heinmathafen Neukölln is a theater with an adjoining bar and much, more style, than one might dare Neukölln, if you think about it. In any case, the home port of Neukölln is an absolutely suitable location for a wonderful Boheme Sauvage. …actually

This is always different and much has to do with, as the location is just procure. Is it, for example, just in the Bassy, then it is suggestive and a little dirty she is in a ballroom, it is clearly set and distinguished. The home Neukölln has more flair, and this ballroom that was the party last a little more difficult. 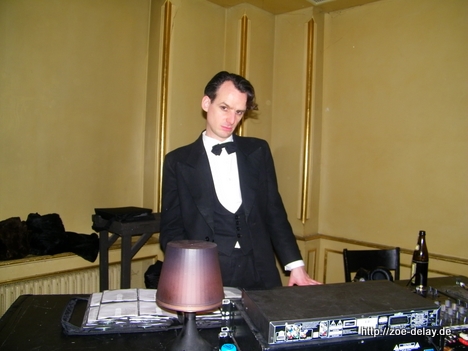 Dr trailer records. Hirschfeld had such trouble with his art, and the guests, barely out of the rest – and were much less bring in ecstasy. It was difficult for him, to get to the correct bubble party. Whether he has done it later I do not know, well not really, woran is lag… An the guest? Hmm were have also been provided to a large extent on other old acquaintances Boheme Sauvage and other parties to demonstrate their suitability for celebration… Perhaps the port… But perhaps the many interruptions.

Stainless namely else has taken care of this evening for a bit of program, For example Operalesque or The Wonderbees, the multiple bespassten guests, However, this unfortunately stopped short Partyaufkommstimmung… 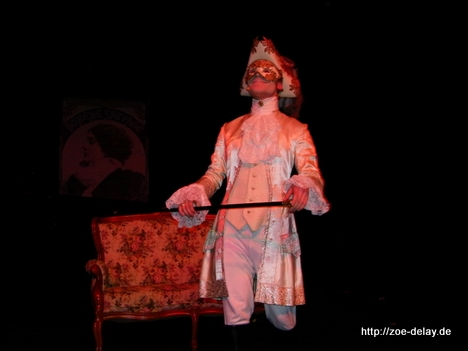 This does not diminish the achievements of artists, The Wonderbees just because I was pretty good… Opralesque I also found quite… pretty brave but. But look for yourself, what I mean.

Overall, the Boheme Sauvage diesesd time but also an unprecedented 20's party with a very stylish crowd was again, that there is nowhere else to… And with many people Liebenswertejn, you meet there again and again like. 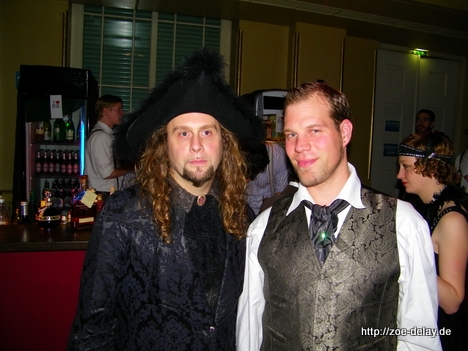 And I learned, that there is evil in Hamburg in early January & Will be a dangerous Swing Royal, will enter the Confronciere for Coco. Eine Swing Royal in Hamburg…. Hmmmm good idea actually. 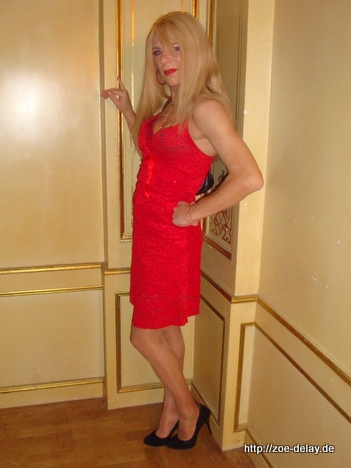 Ps: Sheila & Janka: I could not help, as the word “great” always to erstetzen, when I was in danger, to write it