The Bambi, germany's most prestigious media prize has so few times already spawned comic winners, thus causing a stir, the avowed Scientologist Tom Cruise was such an example, that has caused some eyebrows.

This time, however, seems the jury by Hubert Burda, however, have rolled out their print products and snorted so weird to have white powder, because it comes in very creative and strange thoughts, terms of their award winners. By that I mean of course not Rosenstolz, which one can only congratulate. I mean the award of Bushido.

Ironically, the “Integration Award” Bushido gets missed by the jury and the related press release of Bambi actually contains the following sentences as an explanation:

"He is the most successful rap musicians in Germany and is an excellent example of successful integration.

Bushido campaigns against violence and for a respectful coexistence in a multicultural society.

As I asked in the title: Crazy Burda? You give a misogynistic and homophobic rapper a “Intergrationspreis”. This can not be serious.

Just as one example of many, here his song “Berlin“:

Berlin gets hard again, because we beat up every fagot

Go where you're from, that you do not come back
Tempelhof, Schöneberg, the, of your fucking songs
my city is the armor on the field
you can talk as you like, because I fuck your world
the party is over, Germany has again ne limit
it is quite normal, Men suck no dicks
Rap has no friends, Rap is not it colorful
bring me your response and I'll fuck you in the cervix
you are disabled, I do that all is well

If these statements calls “against violence and for respectful cooperation” display, Then I either have or you do not understand these. Frankly, I'm sure, not me but YOU have something extremely misunderstood… When an example of a “successful integration” is, I do not want to see a failed integration.

To mitigate the detected approaching wave of protests told her but in all seriousness for your decision:

Music is an art form, the conscious stylistic device of a taboo rape – whether one likes it or not.

Aha, are then prompts, To kill gays in “Artists such as Beenie Man or Silla” of dancehall and ragga as “conscious taboo and stylistic okay? And what is the exact difference, when a right-wing rock band of “Jews gassed” singing or sings when Bushido: “You fags will gasified”. I do not recognize the difference or any irony whatsoever and I'm sure, the listener can not both music. it would be nice, when the presenter explains this.

Fortunately, the move not only me but thousands of others, and it moves a lot on the net, preferably on the fan pages of the winners like Gwyneth Paltrow, Justin Bieber, Lady Gaga und Rosenstolz. And, when all hope for a reply from Lady Gaga, I'm actually very safe, that Rosenstolz drop mince words in her acceptance speech.

Am Tage des “large” CSD there are still the “small” unloved brother, the CSD, moves through Kreuzberg-Friedrichshain. To some political, well a lot smaller but still always there and surprises. 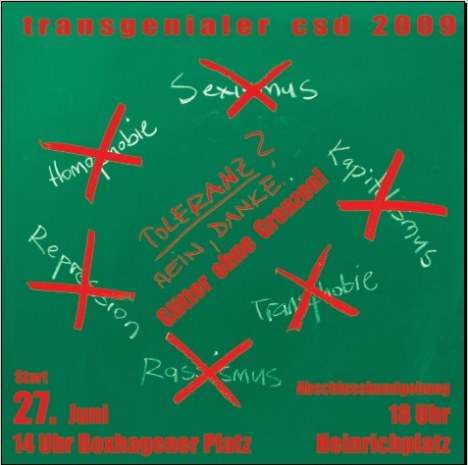 I said it before Jaren two already and I'll say it again. Also an anti-WHATEVER CSD is only glueing, if there are people, report it – and if there is the slot, purely slips in this… Am Tag des “large” CSD rather a difficult matter… A week earlier would certainly be better for proper press coverage.

So be it, this time it has the Trans Ingenious CSD actually done a little in the press, because he is on the way to hit a halfway celebrities. Bushido

I wonder so long, what actually is so exciting about the, but I'm probably not his target audience, and no one, would be in his Bushido Store on Alexa money.

Now that German rapper, is noticed on several occasions by his anti-gay lyrics… According to rumors, and his line of text “You'll piss queens” only on the advice of his Plarttenfirma “You fags will gasified” has changed. Was with other guys at the burger stand Silesian Gate, vorbeizog as the train. Is stand-sah – and accosted. It flew at least a glass bottle and at least one drink. ..The police had to intervene.

Bushido is an indication for libel, have received a complaint of assault some other types.

Indymedia is available to the following:

shortly after the Warsaw road was passed, there was a brawl at a snack stand under the subway bridge. reason: the berlin “gangsta” bushido rapper has with some of its “etching” homophobe parolen rumgeprollt. immediately the sexist mob was surrounded by the demo. then threw one of the “etching” demoteilnehmer_innen a glass bottle in the quantity and hurt. There were then 2 provided criminal charges.

Ich mag Indymedia, but the sound is there, but always funny.

No matter. Finally press the Trans genius CSD. How to order.