Since I make the page Pinup Fashion.de flutter from time to time any invitations to fashion events in my mailbox. At the weekend it was a mail, which to me 5. Berlin Fashion's Night wanted to come to the Adagio. 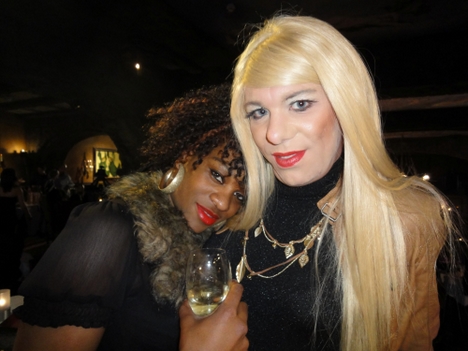 Hmm why not, even if the Adagio as such not just one of my favorite party places, yes you can view times, what a Berlin Fashion's Night is as accurate and why do not they take place at Berlin Fashion Week, Like all other major fashion events in Berlin.

Now, the Fashion Night showed some rather unknown designers on the catwalk, whose pieces are worn by models, which were previously selected in a casting, which obviously brought their own shoes and did not know what she would wear for, because the compilation dress – Shoes was frequently quite adventurous… Overall, it seemed to me to be the name of the event rather enrich the business card of an event agency, out to be a really good show of fashion lovers. 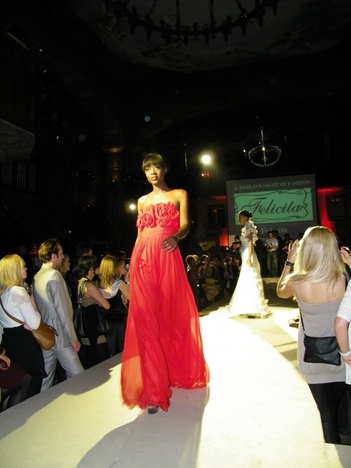 Also, the show acts between the designer shows were rather average – if any. A really bad singer, the photographer next to me with a “boh is the bad” titled and also more likely to show this for a business card needed a show they would have needed. To a pair of Blues Brothers on stage, but not real and can not Soul Train were. Overall, I've seen better fashion events. 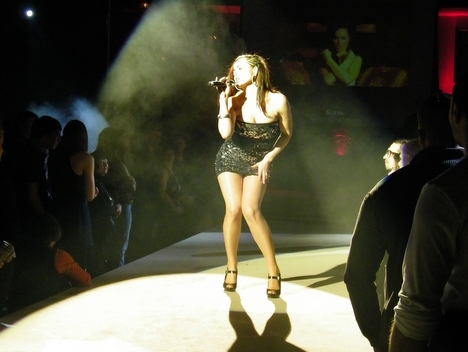 A special effect have the men and women organizer also be involved, that they have sent a nice strong headlights against the direction of the assembled photographers photo. Man man man, I do not know, who came up with this idea. Surely no, would have been on pretty pictures… 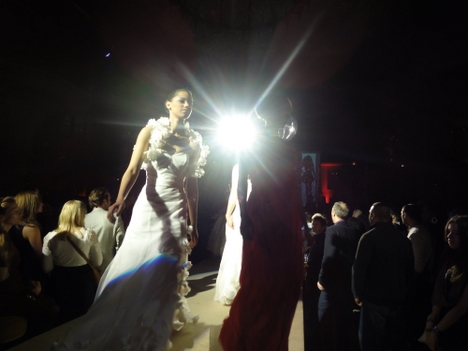 There were also positive in the event, although a label, which I do not yet know. Lüllepop Design, obvious from Berlin with interesting clothes Fabric, Paint and lace. The pieces I really enjoyed it and I would have hanged me a lot in my wardrobe, I would not necessarily claimed by most other creations. But Lüllepop can be observed even closer in any case.

I then but still quite good amuses me, I am good with a girl, I really should have known of the Rockstar Models Party… actually. I could not remember anything of course. But surely, because she had to tell me something as a model coach and we had to talk a lot, blaspheme and also to praise a little, But especially also to initiate a few nice drinks. 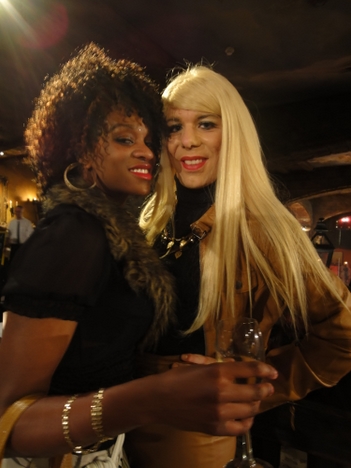 Marc Jacobs is not now the least known designers in the world, me, although he is primarily due to a term of his shoes, but he also designed very nice clothes. But by far the most appealing line he designed for the female half of humanity. Marc Jacobs knows exactly, what women want – and the shoes too, what I want.

But where he knows it as accurate? Well, most male designers have obviously also a female – but at least androgynous page, at most it is realized, but not everyone shows it as, Marc Jacobs knows, the london posed for the magazine industry some time ago.

But I honestly have to say, I've seen much nicer legs Men. Immerhin sind sie rasiert 🙂 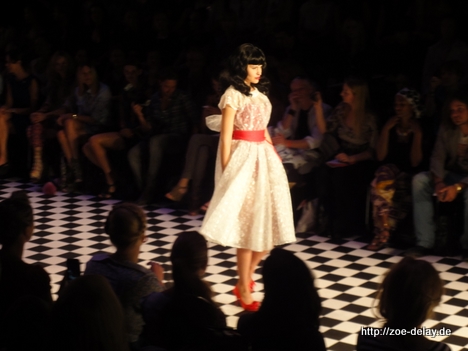 I can not say with certainty, I've seen the two most exciting shows at Berlin Fashion Week, I, unfortunately, not accredited was. For the Underground Catwalk however it was again this year easily and with a reference to the Artists Charity Night in the last year in Zurich, and my contribution was not a problem, Get Einladungenzur Lena Hoschek Fashion Show at Fashion Week Berlin and going there with Dani, which also had a ticket. 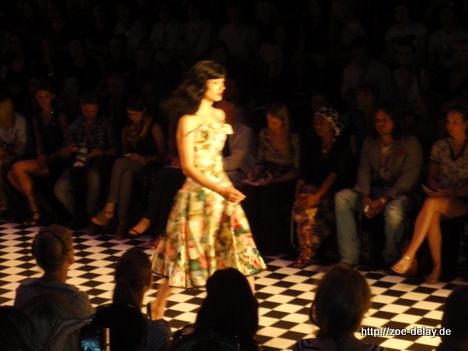 Even in Zurich I found Lena Hoschek – neben Eve Gallagher – as the Highlite of the evening, their outstanding fashion models and their wonderfully different from the typical model of the typical fashion shows. So this time again, But more on that later. Is fixed, it ahttenmanche models this year it really hard with her.

Unfortunately, I only hatet 6/8 of the day off and had to choose between the Lena Hoschek Show and the visit to the Bread & Butter still a meeting in the company. In order not to appear there in a pencil skirt, or at least in the flower summer dress, I attended the show completely underdressed and boring. That will not happen to me again, because the cameras would have been sure, because honestly – the majority of the audience is not marked by exciting clothing in the style of Lena Hoschek. 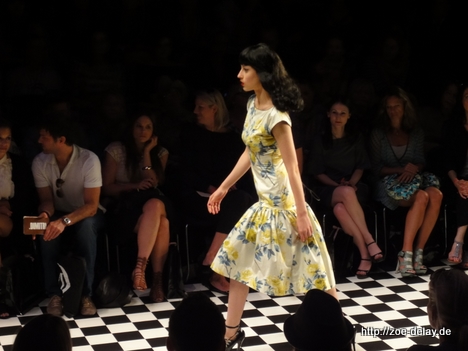 One of the two Klitschkos, Jenny Elvers, a wannabe pinup and much chest and lips, which turned out to be Dolly Buster, to some of Germany's Next Top Model, the contestants were probably the most important people, but not the most exciting… do you mean not exciting for me. The cameras and photographers saw the different nature and sought other names as Katya Cintja or Lexi Light… Is quite. 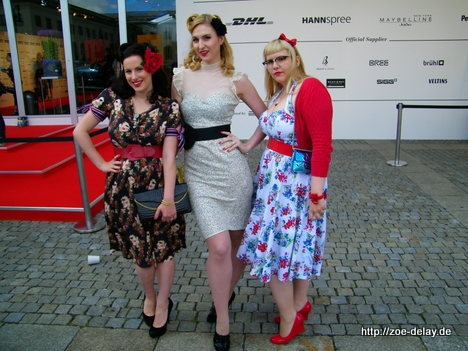 But we were there to see to yes, what is and is not seeing IN BEFORE Lena Hoschek Catwalk. And that could be described with four words: floral, rivets, black, Latex. She designs so wonderful dresses in the style of the 50s and 60s. Often floral dresses Floral, you love to, innocent girl would imagine at some summer days. 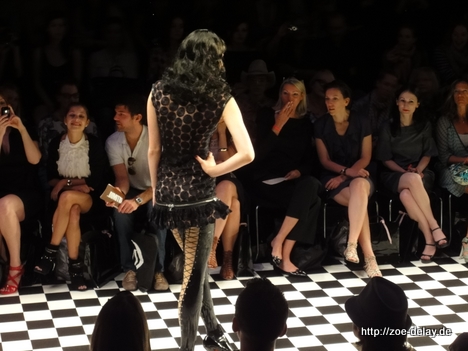 But Lena Hoschek girls, er models are certainly not sweet and definitely not innocent act on the catwalk. Whilst the music echoes of bands like the Ramones and move it down the catwalk dressed up in high heels and latex stockings. These plays Lena Hoschek with accessories such as studded belts. Also probably a reminiscence of the punk, the actually went off until well after the favourisiserten of their time… 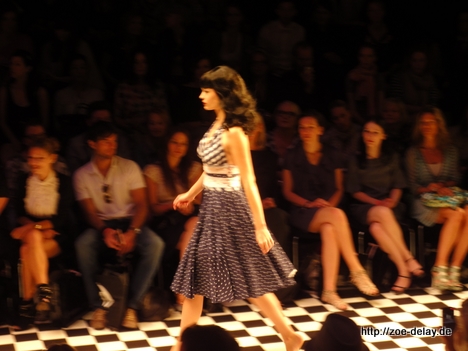 Another reminiscence was clear and made life difficult for standard models, only because the whole show was black hairstyle with bangs. On the whole, then, a Bettie Page Style. Blonde model had no chance with her, but I think, that because one or the other wig must have been in the game. In any case, it was refreshing, to see, it was even a few models, from the typical “I'm a runway model and should act terribly Untouchable” differed and apparently even had some fun.

Dani next to me would have liked to taken everything and I would have gladly filled the closet with their designs, but that can catch up soon, because there will be from August a Berlin Lena Hoschek Store, although I do not know yet, where, will certainly prove that soon. 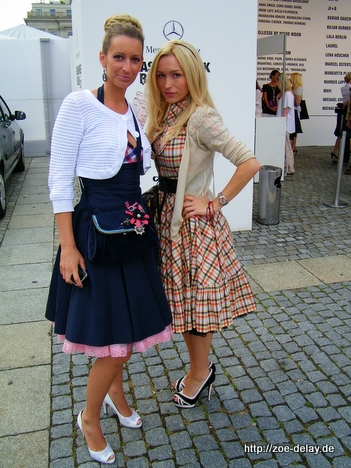 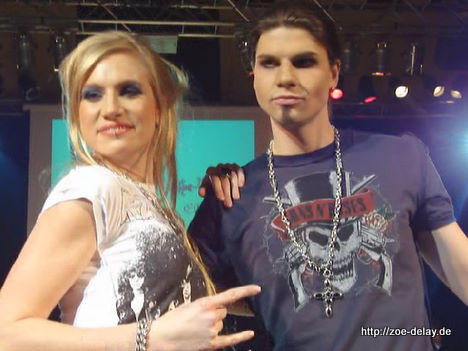 Amplified… hmmm me so far was not a term, until I took a close look at the CBGB shirt, I've picked out for this event… Unplanned I have worn exactly where the label, that there was. Surprisingly. I would never wear a band t-shirt of the band, that is occurring, but one was on a shirt Amplified Amplified show then okay. Is anybody noticed anyway. So I was over the label, of course, very open. 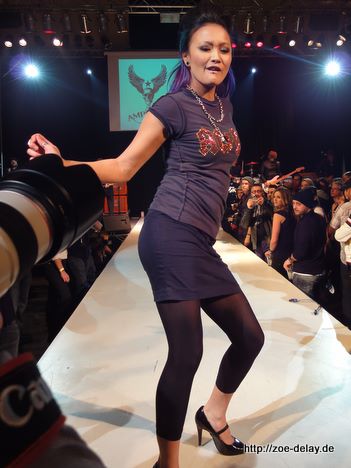 Well Amplified oven makes clear, especially printed t-shirts…. and I can remember, that last year I remarked a little while Underground Catwalk, that printed t-shirts, that there is something like this in any fashion business, Underground Fashion is not necessarily…. HERE sees things completely differently from. 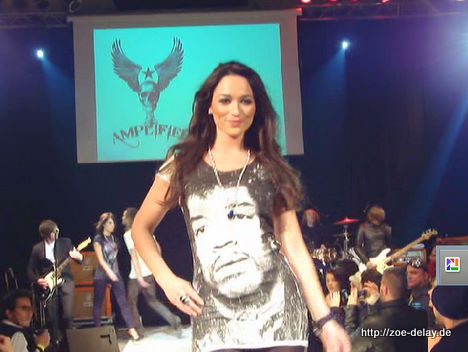 Amplified printed t-shirts as band shirts, and not with any, sondern mit den Klassikern unter den Band Shirts schlechthin. And then just when the Ramones, ACDC, The Rolling Stones Tongue, die Pistolen von Guns’N’Roses oder eben auch mein CBGB Schristzug auf den Shirts erscheinen, then the rock and on a Fashion Rock Night IS fits like the proverbial eye of the fist.

That the Rockstar Models to fit well is of course of course, the music of mock well and the guests anyway. Moreover, we do not talk. Arguably the best setup for a Amplified Fashion Show…. and unlike in a fashion show last year, I complained to the, I would not like one of the pieces shown, this was different. I almost took the whole collection. Above all, in any case, the two Ramones dresses, which can be seen in the videos. 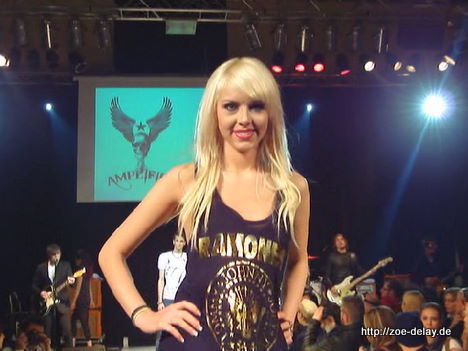 What can I say, almost all the bands on the shirt are also represented in my Platten'sammlung and the whole contains a significant part of my musical socialization, and in that case I can have a really good opinion about a Amplified Fashion Show, actually “only” printed t-shirts shows, because there are not exactly what irgedwelche but with style and past. 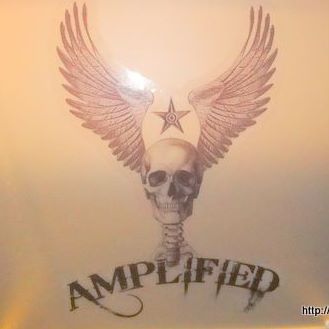