You have to be able to change your mind sometimes 🙂

In this case, my opinion on the Glamouresque. For those, that they don't know, the Glamouresque are a troupe of four Friedrichstadtpalast showgirls, who decided a few years ago, to become a burlesque troupe. 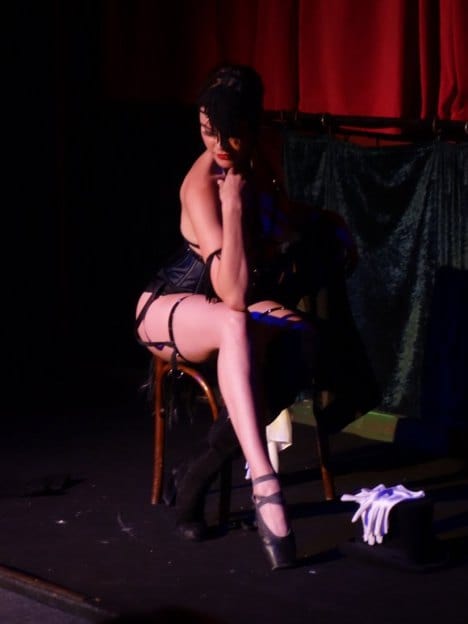 I had seen the Glamouresque twice, back then in the Horns & Hooves at some party. They made their first burlesque appearance when they hadn't made a name for themselves and were still traveling under other names. The first appearance hit me – Not from stool to say the least. 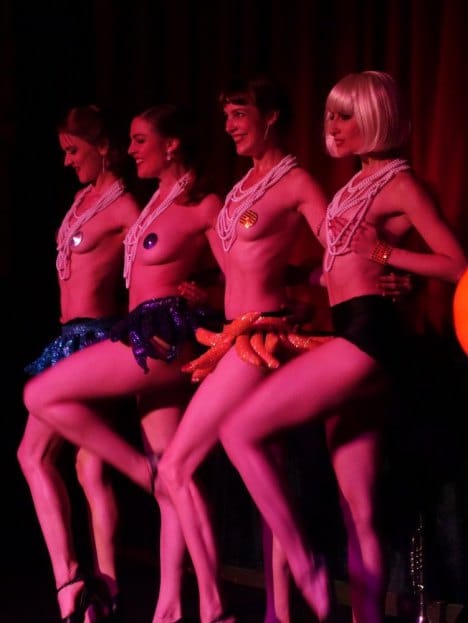 I saw her a long time later – now under her name – in Ballhaus Berlin again. There with their first own program. …That didn't knock me off my feet either. Was clear, that the girls had all the facilities, to be a top burlesque troupe: You look great, have legs up to the sky and back, they know how to move and have stage experience. But they didn't make much of it. At least not that much, that they had impressed me in some way. 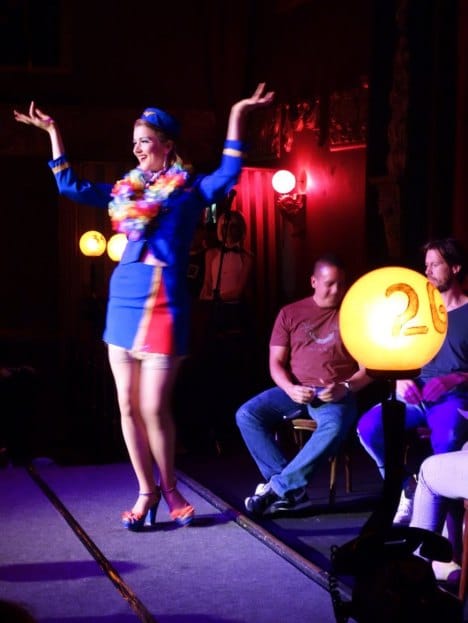 The numbers didn't have anything special, the outfits one “approve” Touch. They were just pretty girls, who undressed on the stage. Boring! 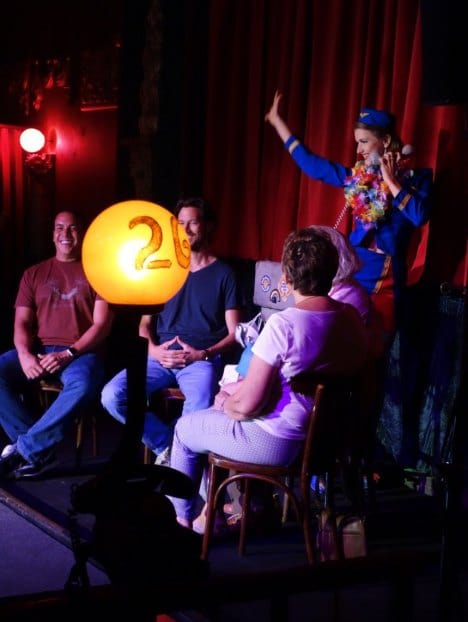 therefore I had to think twice, if I would like, this weekend in the Ballhaus Berlin come along to see The Glamouresque. Just recently I already had seen a boring burlesque troupe there. You don't have to willfully repeat mistakes. 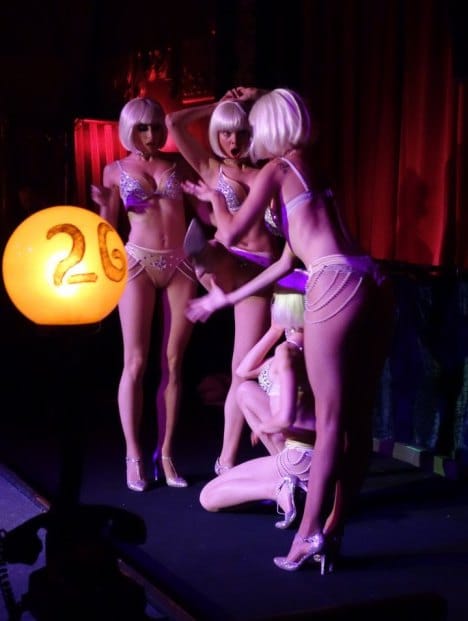 But Sheila had seen her one more time in the meantime, and she had seen her too Vaudeville Variety booked. Usually it just does, if there's something behind – so it could be, that they have evolved – and then I wanted to take a look at it.

And: And, they have evolved and turned out really well. 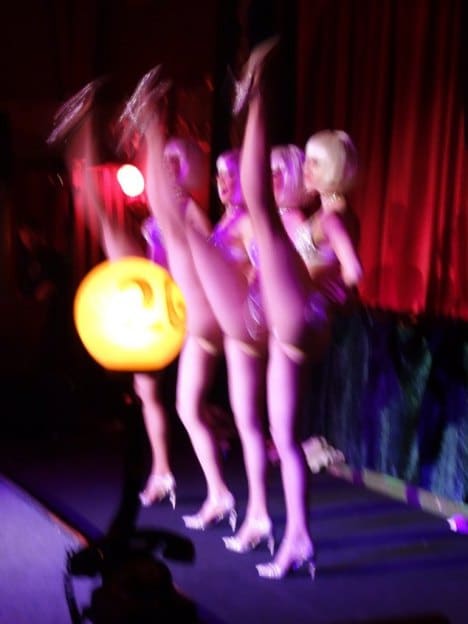 You rarely see legs like that thrown on burleque stages

Your numbers now have stories, they have wit, the girls don't take themselves deadly serious and they are now playing with the audience and their showgirl training to the full. They dance on their high heels like on ballerinas, They dance in ballet shoes like ballerinas – which they are too. They also throw their legs through the air and of course still look great. Even the outfits were now great and perfectly coordinated. 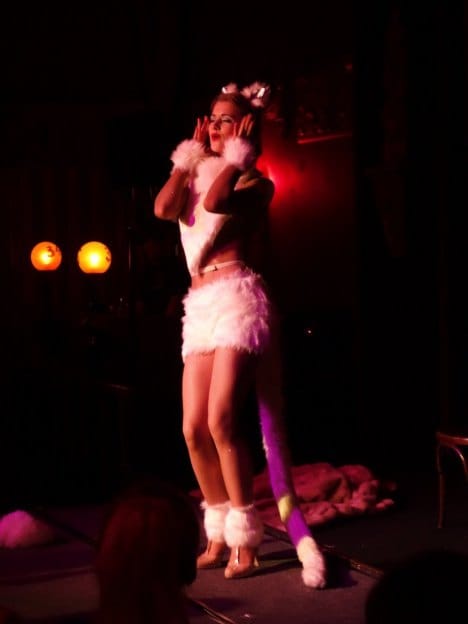 After the second number I was already in agreement with myself, that I could change my mind about Glamouresque and now find it good. 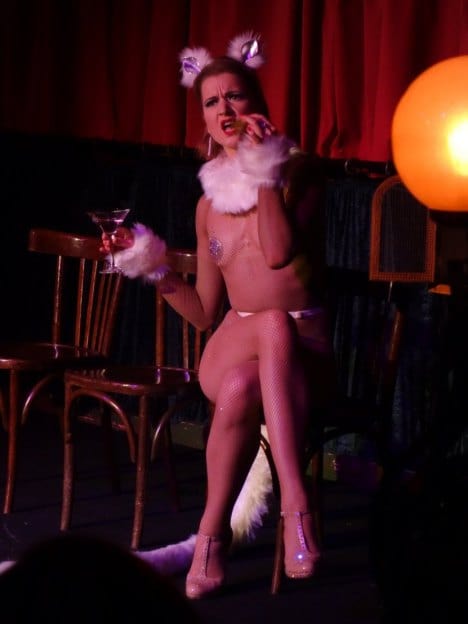 It's kind of logical, of course. Than FriedrichstadtPalast That's probably what showgirls do, what another tell you. Without thinking, without questioning, completely without your own creativity and, above all, without tinkering with any numbers. Just show girl robots. 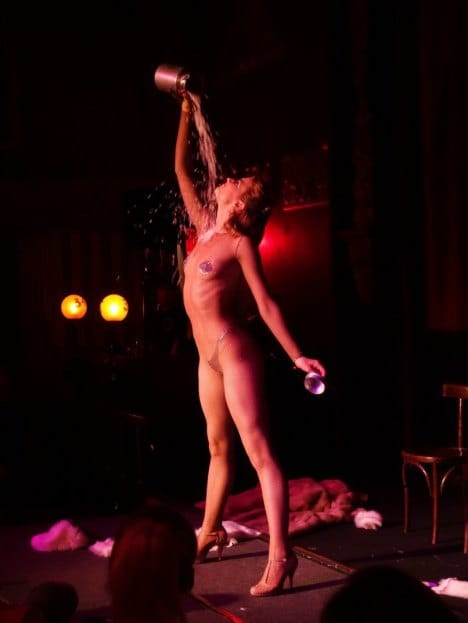 And if you never have to come up with your own numbers, she never has to develop further, never have to design your own outfits, then you can – despite the best facilities – just not. You never learned it. Ultimately, the good ones are Burlesque Dancers did not fall from the sky either, but developed. From number to number to number – and the first were seldom the best. 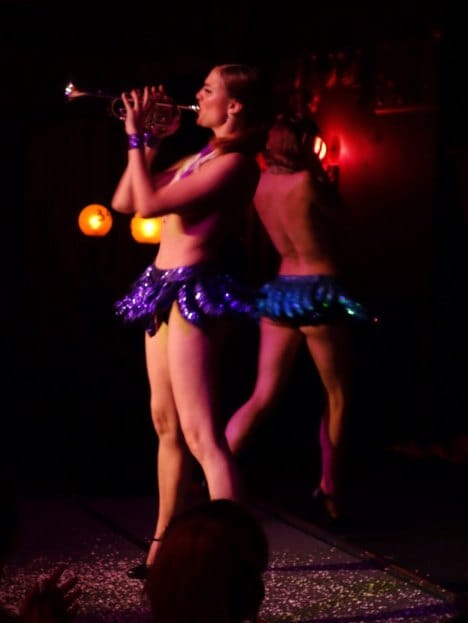 Ultimately, the two were appearances, that I had seen not much more than that Graduation Night from the Beauty Dance Studio – just without them (Burlesque)-Instructions from Lady Lou and aim a little too high, to bring a full evening program to the stage… That could only go wrong. 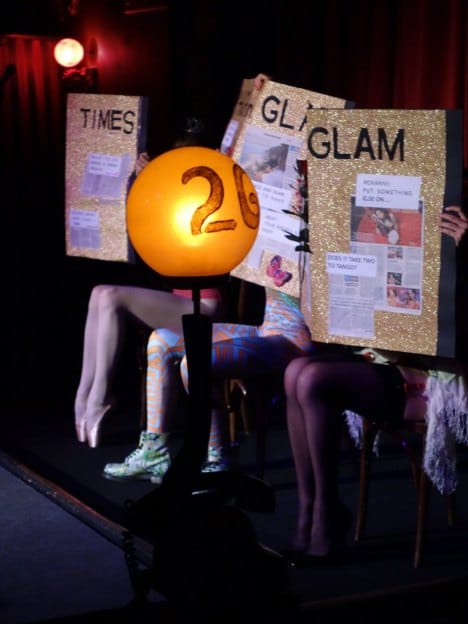 The girls have recognized that and – Professionals like you are safe – worked hard on yourself and the numbers. Not only in moderation and the numbers themselves, but also in something, something I've never seen in burlesque. Many numbers had credits, so to speak. 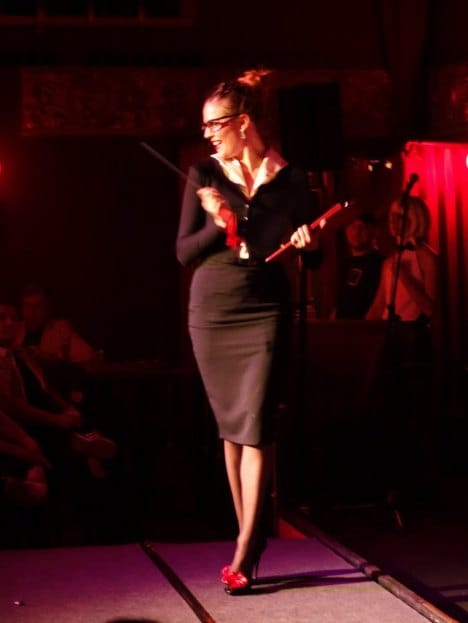 Usually you know that from burlesque. Number – Tasseln – Finished – Bow down and get off the stage, the Glamouresque did it, that behind the number and the applause, often the number goes on again in some way, and the girls don't just leave the stage like that – Clear, when i think about it, something like that happens in the Friedrichstadt Palast too – but I've never seen it on a small stage. TOP! 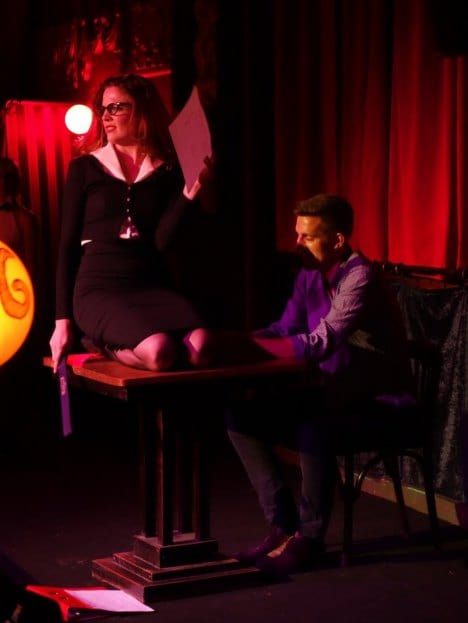 There are also some numbers, in which the audience is involved in different ways. Bite off the banana, act as aircraft passengers drink their drinks or e.g.. As in this case, being treated indecently as a student by the hot teacher 😉 Whoever sits in the front row of the Glamouresque, that can happen, having a showgirl on your lap. Not the worst, what can happen to you in the front row. 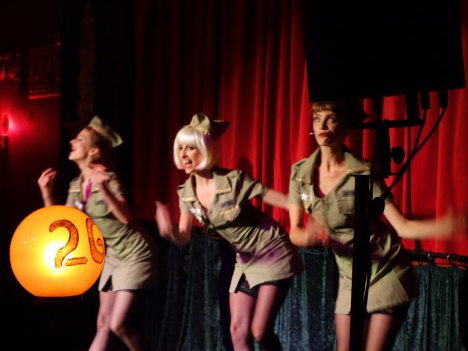 But you can also use the traditional Andrew Sisters Army look 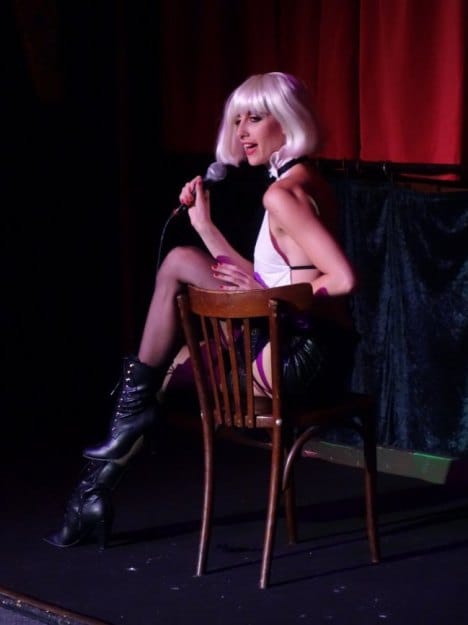 Host of the evening Miss Lola 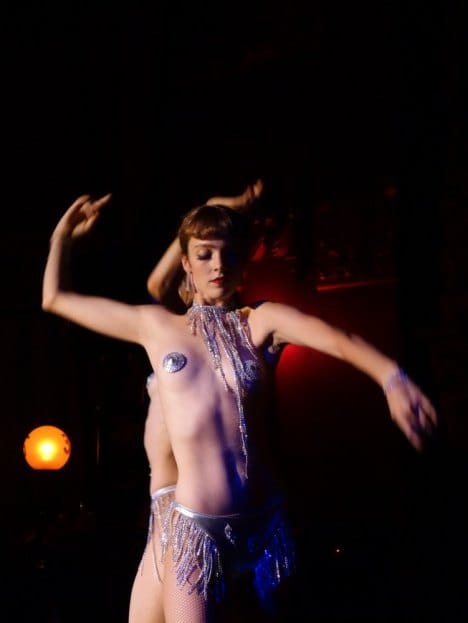 Even if they were all good, got me personally Black Rose most enthusiastic, and that wasn't that, that her legs are a whole corner longer than those of her colleagues, but rather because of their stage presence. She has great facial expressions and it seems so, as if she's just having a lot of fun with what she's doing. Clear, To suggest that is the daily bread of a stage professional, but I think, that must be real.

I believe, that she is a real sunshine: And
I have more signs of it than your stage presence: No 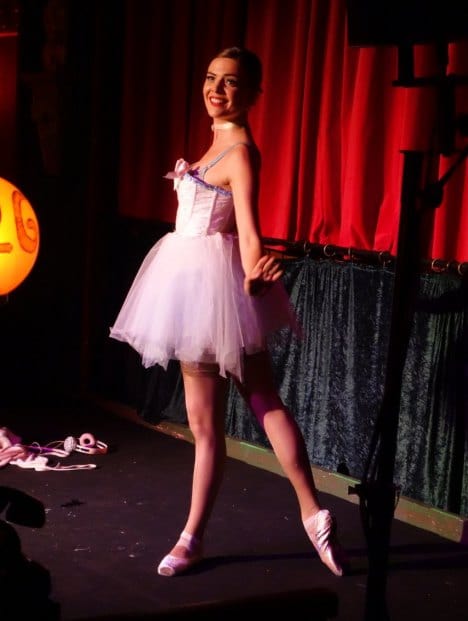 Tara D’arson was hardly inferior to her and she had the number, that excited me the most. A number, which probably stands for glamor esque, like no other. As said Mademoiselle Lola “We are Ballerinas. Our parents were so proud – and then came Sex, Drugs and Berlin”. Represented in Tara's number by a bag of chips 🙂 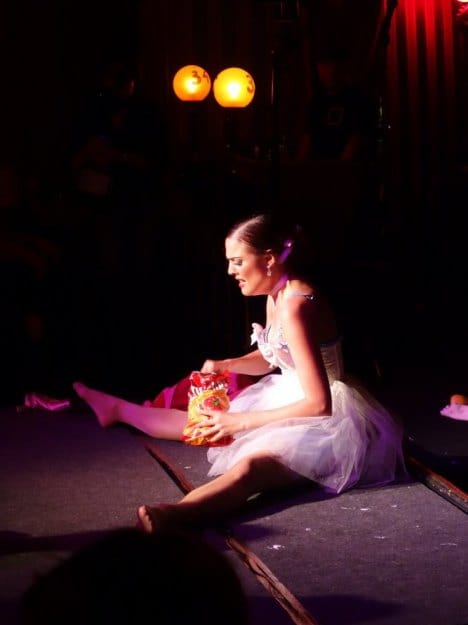 The ballet shoes became high heels, the outfit scarce and instead of the legendary 32 Girls Friedrichstadt Kickline now only four of them with their own numbers. Many numbers may be added. 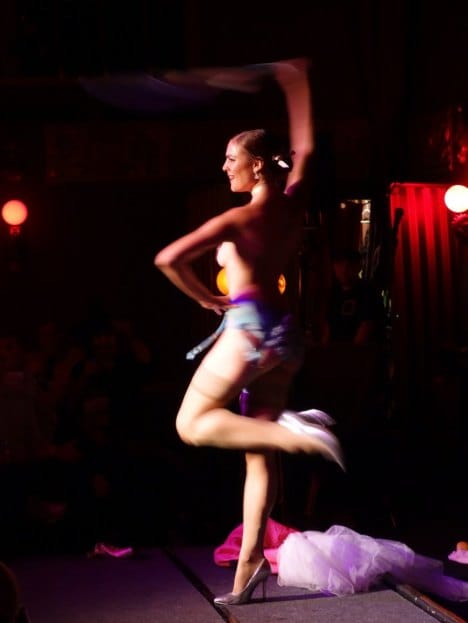 As I said, I've completely changed my mind. The Glamouresque have developed into a great burlesque troupe, which is really worth visiting today. Should they be in town, go there, it is worth.