That can not all be true.
You shake your head, if the news from the East, from Russia, Ukraine and Poland also reads on the rights of homosexuals and transgender, feel but also in Germany obviously many opponents strengthened.

I could not believe just, what I read in the newspaper about the CSD in Rostock, who was now in danger. This is so incredible, I think it's an April Fools joke.

“Also a hood ban was imposed on the participants of the City. “It prescribes, that nobody can dress up as, that his race is no longer recognizable.” For the organizers, this requirement is particularly absurd. “Finally, it involves the, make that homosexuals as colorful attention on that day itself. Shrill panels and drag queens are simply part”, said Luther.”

That can not be true, they are by the “successes” strengthened in the East as, that they also try it in Germany now? Just Rostock should have learned from his past. A mummery for drag queens in a CSD? Rostock have not heard the shot. Drag queens are not only includes “easy to”. They are a fundamental part, which has led to the CSDs in the world.

Clear, There are different stories before the Stonewall Riots 44, but that a great event was a raid, which was directed precisely against transgender alongside homosexuals, is undeniable. The law then said, one must carry at least three garments, identifies the gender of the person wearing clearly. This led in turn to, that the transgender, the drags, the queens were arrested for the first time and really fought

Not only do they, but they were, the, that violated a law, are the very “normal” Homosexuals in the bar “relatively” remained unmolested, sodenn they were able to identify. This discrimination led to Stonewall and the following year to the first Gay Pride (CSD in Germany)

And who does not know to this day, What is celebrated on the CSD, may still read it again:

It's not about listening to music, not to celebrate, but to 44 Stonewall years.
http://www.anarchismus.at/sexualitaet/texte-gegen-homophobie/351-30-jahre-stonewall

Yesterday was the 2. Gaypride Gala at the Friedrichstadt Palace and a great promo tetes drag queen casting for a much-heralded as drag catwalk was also done to, really will notice that each of them. 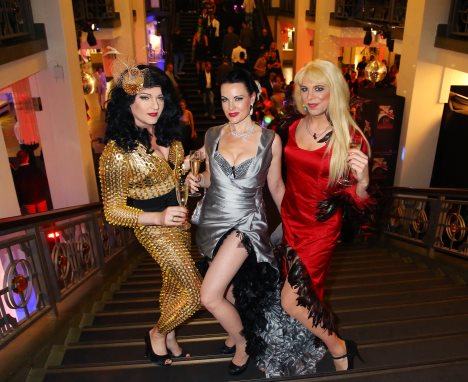 So therefore gathered yesterday evening everything name and rank or rank had not yet name in FriedrichstadtPalast to 2. CSD Gala unter dem Motto “CSD meets Show Me – Glamour is Back” to enjoy and run on the pink carpet or even the big stage. 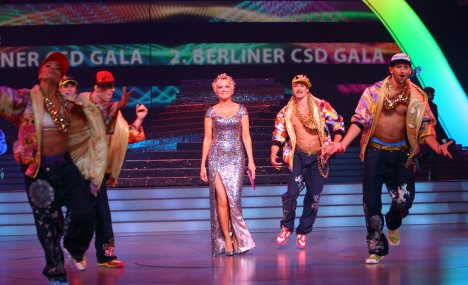 Knapp 2000. Guests should have been there and the palace was quite filled a homosexualisiertes “Best of Show Me” admire, in addition to the actual show some small elements were integrated, that fit particularly well, because a lady was exchanged at the pole dancing pole against a talented young man and there were a few kisses on the stage to see, otherwise it was probably not. 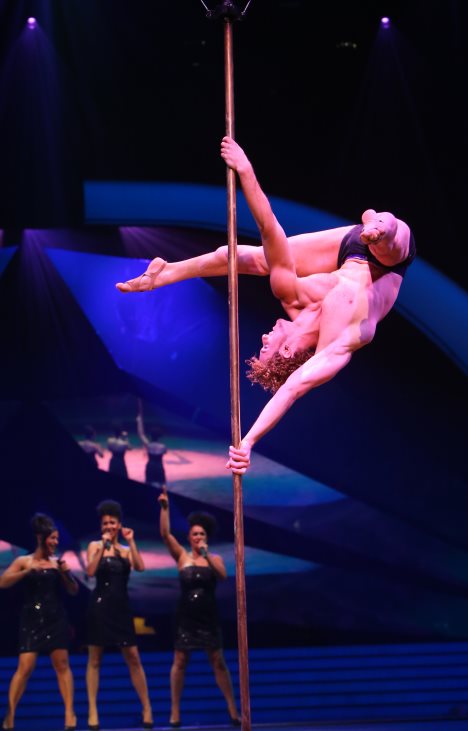 Even the good-looking singer of the finale was this evening a much better looking drag queen. Hey, he should always be on stage. It looked really good and he is always singing beyond doubt.

But the CSD Gala is not only a fun. As already indicated in the first image the same, that it is more – and always will be several. A cutaway gag from last gaypride Berlin showed spontaneous applause, were shown as images against homophobia and the time already clearly visible signs in Russia… But for sure I will write more in the coming days what. Somehow the whole world that is currently quite a belonging to the Macke. And that's nice words.. But back to the CSD Gala. 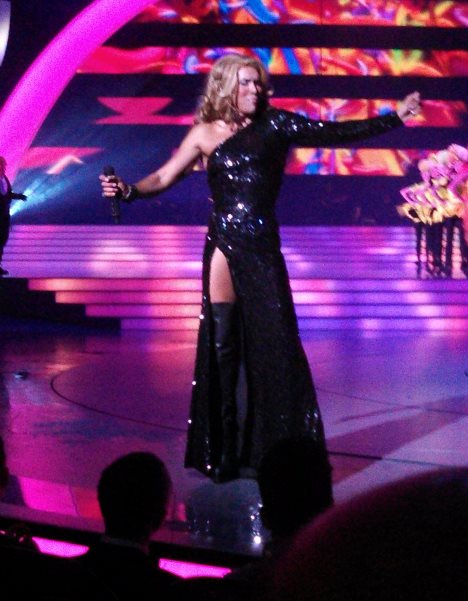 It had quite a bit of politics there, Three prizes were awarded for courage. Got a country Argentina for an enormously progressive law that allows anyone Argentines, to be felt before sex life completely and get recognized. Wow. In times of backwardness a class characters – Absolute value of honor – but for me actually using the keyword “Courage” filed not quite right. 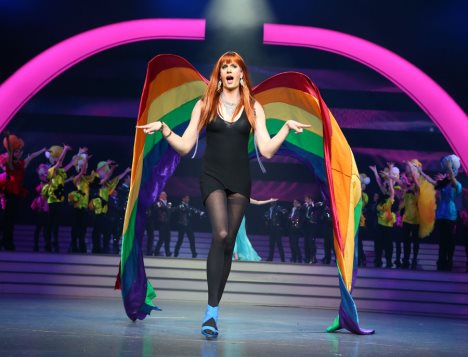 As already fits more the second prize winners Dirk Siegfried, a lawyer, For many years the federal courts the right to fight hertreibt to gradually important decisions, Ehegattensplitting, And survivors' benefits, and. First sounds sexy but it is not, because it means equality – and so gehts yes. Presumably, he is a person non grata on any CSU / CDU / FDP hard. In this respect his point against Dirk Niebel said the course was very, very roughly “Interesting, that the FDP at such events as the great and distinguished but then decides as Black / Yellow differently. 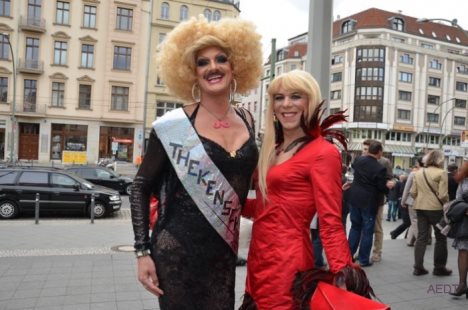 He's right. Because Dirk Niebel was directly in front of Kasha Nabagesera awarded. A Ugandan human rights activist and founder of the organization Freedom and Roam Uganda (FARUG), which is committed to the rights of homosexuals in Uganda.. For me, the – Not only – emotional high point of the event.

In a country, in which such a use like revenge with murder, in a country where activists as they can not move freely and have no fixed abode is such a commitment not to overestimate. This is courage – no, this is much more than the. And the audience relished the the spontaneous rising from their chairs (okay, it did later also 2x but rather because of some, forced the ish) the never-ending applause for Kasha Nabagesera, however, was significantly longer, violent and probably more honest. Such people are heroes and I'm really not built close to the water, but the ranking almost a tear from me. I hope the price will help her in any way at work and is not just a price for shelf. 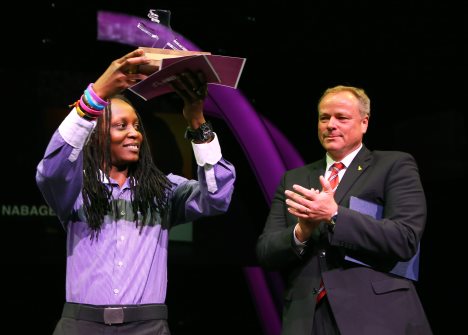 Otherwise, as I said, there was a Best of Show Me to See, but because you look better in me my post about show. Great Glitter Costumes, tolle KÖRPER, Women and men and the great waterfall Glitter. 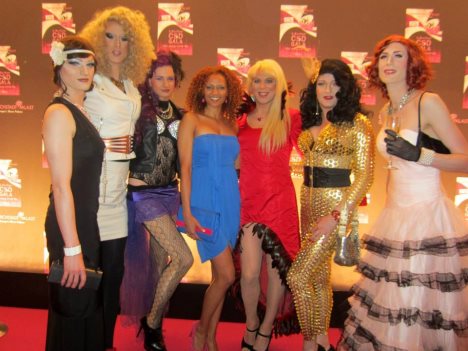 But the evening did the visitors from. Except on the actual CSD parade I've never seen such a concentration of such Berlin Drags. Light is almost, enumerate, who was not there, than the other way around. Jurassica Parker described it as a big family reunion… And somehow she was right. But the very next Saturday so see all the parade again. 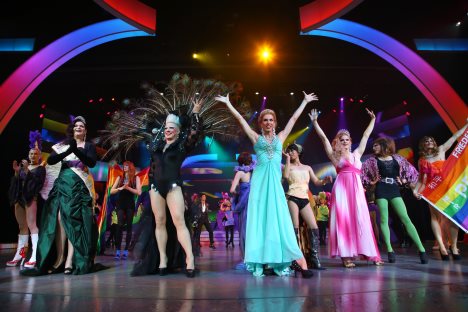 For the grand finale, Drag the catwalk I do not want to lose too many words. Only so much, I had a lot more as presented and that went some way. Choreo? Costumes? There was certainly one or the other question marks on the stage… But look for yourself:

Someone said, make sure that there could be more, but then one must invite the ladies each well and do not rely on it, that they already came to the casting…

I'm generally a friend of well-made flash mobs, although most flash mobs have little to do with the actual meaning…

Always, if more photographers and video cameras are present as Flashmobber, is the whole a rather double-edged sword. For a good flashmob distinguished indeed characterized by, that is not even visible before, that just because something happens. No matter, so be it, when it is done well or at least funny, can it ever watch.

This just about have already been 100.000 Do people in this flash mob in front of the Sydney Opera House, to the drag queen Joyce had Maynge loaded. …It strikes me again and again, obvious that every mob in the world includes at least a drag queen or was even initiates of their.

And what exactly makes a good drag queen from Sydney? Sure, Australia's mascot Kylie Minogue with a medley, the safe dfazu leads, that this video is soon locked.

The video tells the story of “hundreds” Dancers. This is probably somewhat exaggerated, but there are already a lot and certainly there was previously a lot of samples, so that the hinhaut. Insofar receives all my respect

…and, I'm back for a long time, but there still lacked a contribution 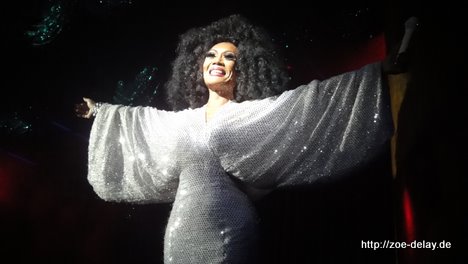 Actually Samui should only be relaxation. Eating, sleep, Drinking, doze, eat, sleep and so on. Instead “working” I then yet again.

So I drove by yesterday and Lamai Beach on a time I saw – more out of the corner of my eye a blonde… That alone is already in Thailand rather something special. 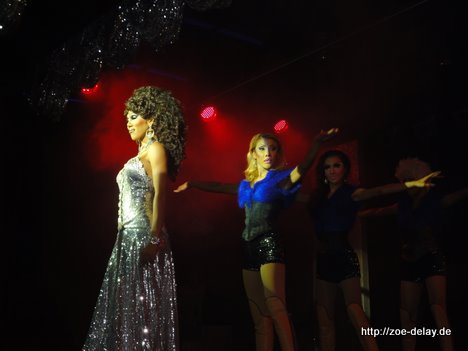 But more caught my attention. The blonde had flowing hair and was surprisingly large, this slim, dressed handsome and sexy relatively… My first thought: As a Janka is in clothing of Kitana…

…Yes I had to stop by again and find, that the blonde combined with more Janka and Kitana, because the lady was just no real. I thought so, but somehow the same… I stood in front of STARZ Carbaret. And there were a few other drags or ladyboys, as well say here. I was then a flyer into their hands. 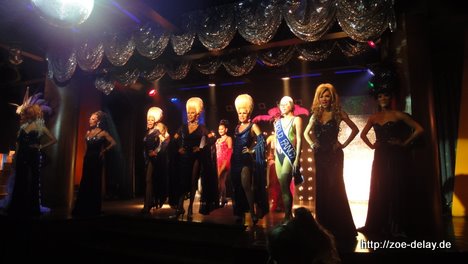 How can I pass up the…. And so I sit tense today armed with my camera on a good seat and watch time, what the girls have to Samui as it. Nach England, Miami, Havana and of course Germany is now off Thailand, something to show.

I'm excited. Hart is in any case already, that the waiter made- (not inside) running around in Tütüt and not long hair bows in. The poor men… but no matter 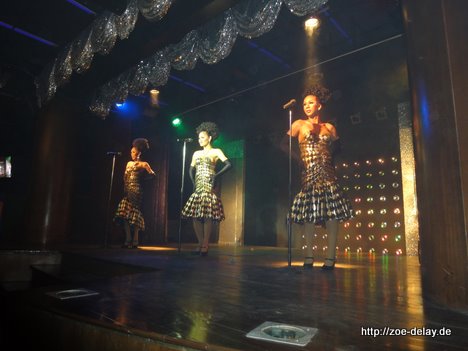 15 Drags showed a really good Schow all the divas, so that one knows from the pop and soul history and massive drag queens. Gwen, Kylie, Whitney, Madonna, Christina, Eve and and and and of course Abba. Each class with choreography and costumes.

Well, in Thailand and the cutters are so cheap and because you can tailor the right costumes ever… The Lady, I found on the roadside in front of Starz, then came the way, actually as Kylie in pink showgirl outfit on stage… So once more a Janka. 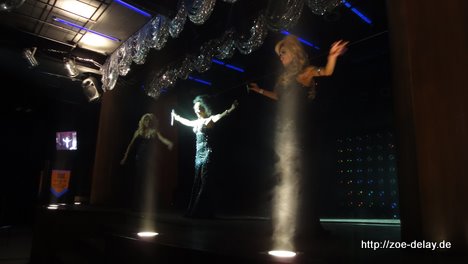 what can I say, I have amused myself during the Starz Carbaret show and I'm always amazed, how the same songs are interpreted in different countries…

btw. Whitney from the Starz could not really compete with Melli…