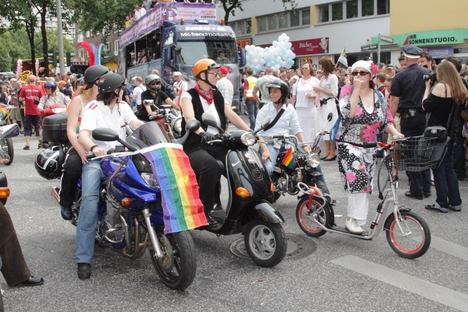 Dykes on Tretroller – Reputation for Dykes on Bikes

The world's economically hard times go to the Christopher Street Day in Hamburg not unscathed, as I discovered in the long line on the last weekend. There was a new simplicity and it has cut corners and ends. The Dykes on Bikes led instead of heavy machinery as usual this year, the parade on Vespa scooters at. (That's almost libelous), Olivia Jones saved himself quite the same and I convinced with stylish elegance and less substance than this navy outfit is actually assigned. 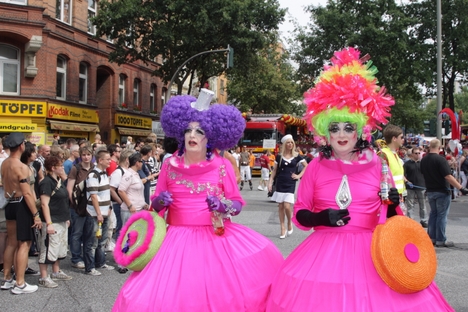 This time I show the two… I did it last year but forgot.

Instead of the Supergirl outfit I decided – there alone and traveling in Hamburg – for my Navykleid of Stop Staring. But shortly after I left my home and came into the sun, it became obvious to me, that it was too hot for a long dress and I had to do something urgently…. Consequently, I entered a stop at my favorite hamburger Alterations, the binnnen it 10 Cared for minutes, I have the same one parte a little fabric. As I said, it had to be saved. 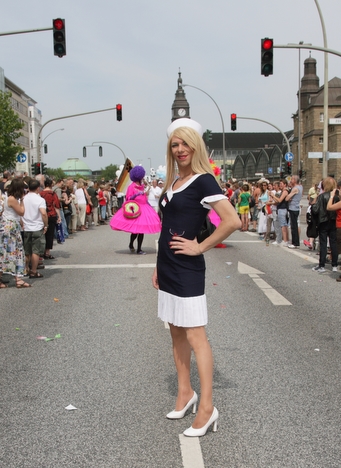 That the dress at the end was the wrong choice, I then had to go to the Christopher Street Day view pretty quickly, I noticed it almost immediately, that the photographers crowd did not respond as usual to me… It even went so far, that some photographers – while I vorbeistöckelte them – rumhantierten on their cameras, thus these interesting at the next person – I was not obvious – is completely ready for use. So I have to say the photographer saving memory card space. Hmpf. That would not happen to me last year with the Zönix – and it will not happen to me next year again. I swear. 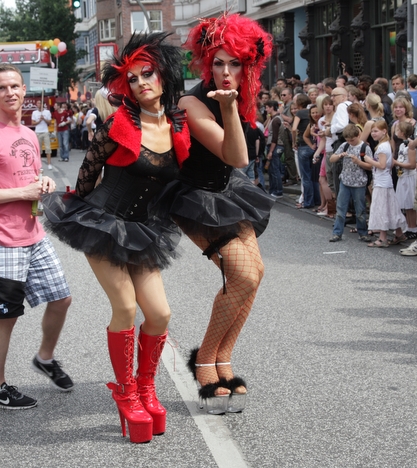 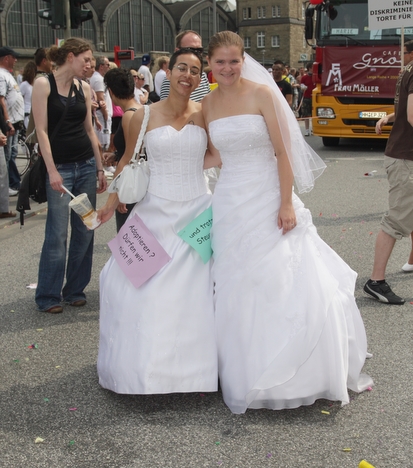 But frankly I am not surprised that even. So it was with the Christopher Street Day in Mannheim or greater Gaypride at the other end of the Republic, as the weather was so great, that the Baltic Sea, the North Sea, Outdoor pools and lakes attracted and finally the world was still Astra Day. Enough reasons to stay away from the parade. But it was really well filled. 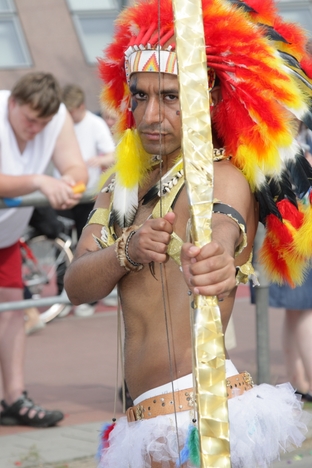 And who thinks now, I this Gaypride Hamburg terrible place, which is completely wrong, because I have enjoyed the day and I will enjoy the Hamburg next year again, because Hamburg has always been great weather, nice people and a smooth mood. Another outfit and everything will be fine, The next time. 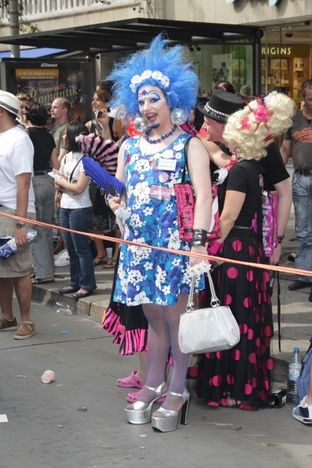 All photos by Oliver Schulz

Baseball is probably THE quintessential American sport. Except in America, a man has never been found, what should be of interest to the sport, but it is there, it is a religion and an event, to go to a baseball game and look at this.

Besides baseball, there is also a variant of the game, which is called softball and probably looked something like this is how women's football hooligans… Nevertheless, softball is played and that as women's football in general by women. However, this sport can be exciting, when played by the right team.

This happened about a month ago when the Dykes Vs. Drag Queens Bat-N-Rouge softball game rather masculine women and feminine men pretty faced to find out, who is better in softball.

There actually was an angel on high heels with Victoria's Secret bag in the outfield. At least that seems to have been a very trashy and very fun affair, at the end of the Dyke Lesbian 33:29 was obtained. So have now won the men or the women? No matter, because it was for a good cause. For example, could face Runs 100 $ be purchased, that the GLBT Capitol Hill Alano Club zugute kamen. Funny story, the whole thing.