1. May heroes at work
or: a general 1. May in Berlin Kreuzberg

or “Large shadow cast ahead of the history & events” Thus begins a song of the crashes ends pigeons and that has really little to do with film, out of, that this band a long time ago, when punk was still an important part of, little was known of this song and I start immediately came to mind yesterday, I saw signs for unlimited time parking ban but very limited parking ban outside my front door. Sometime the next day, then come the Polizeiabsperrgitter and Friday night teeming again from police car on the Oranienplatz.

Last year, however, there were around, this year is concern, which could also be used, to last year, a lot has changed. This year, burn cars in Berlin every day, that any idiot al View luxury cars and Burn, then there is a large NPD demo in Berlin, the last year has led to serious riots in Hamburg – and all went to the anarchists from Berlin to Hamburg…. This year, right and left in Berlin plus anarchists from all over Germany in Berlin… And there on the Friday followed by a weekend, sure a few more. After all, the 1. May in Kreuzberg yes something like a symbol and such a symbol, that there is already a film, which contains only this.

1. May heroes at work

This film deals with different people on a typical 1. May in Berlin Kreuzberg. Since we have a Turk, Javuz like its little brother would be a big gangster and love to make and the cops would flatten and brings him into some trouble, there is Harry, the old '68, Once a year the building barricades and declared Javuz, what with Communists, Stalinists, Freedom fighters and a beer bottle on his cabinet has to be, because there is the policeman Uwe, whose wife has just separated from him, and who has no desire to rampage and without his gun again found in a brothel and is riveted by its own water cannon and finally there's the two tourists from riot town, throw the bottles, handle with ratchet, Branding and try to make first experiences with drugs…. Plus a few other people, whose paths cross. That's all find a late night in the hospital because only the logical consequence.

Overall, a great movie, härterer Art, one day to the 1. May in Berlin Kreuzberg shows – as it could be, when filmmakers think of him. Interestingly, he is definitely. Kreuzberg between the road and the chicken house Skarlitzer Oranienplatz. As this year.

or: welcome to Berlin: I haue my best city in the pan. 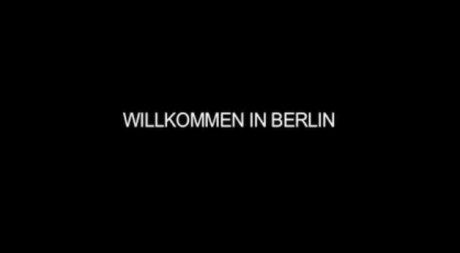 I am – as anyone can testify, which stayed with me once (some) would entertain a movie, not a big moviegoer. In fact, I'm such a rare moviegoer, that I can not even remember my last watched the movie… Lord of the Rings 2 or maybe so. But that does not matter, because most movies are always bad.

Today, however, pulled me to the movies, because I had on Facebook (here the way my profile) noticed, that in the context of Achtung Berlin New Berlin Film Award a movie called Welcome to Berlin genes should, would be shown in the Babylon cinema. Although told me all this little, but the description of Welcome to Berlin sounded exciting.

About the film WELCOME TO BERLIN

What happens in Berlin? What draws people to the city? Ist Berlin wie New York? Is the East-West issues still relevant? Berlin has used his opportunities since the fall of the wall? Is the architectural reconstruction of the city succeeded? Why Berlin sink populations? Is the focus on the “Goldenen 20ern” useful? Is the Berlin bitching a discourse form? If the, what is going on Berlin's red carpets, something to do with glamor? Is it worth it at all, reflect on these and similar questions?

Somehow, all this also reflects yes my relationship with Berlin again. 30 Years of my life in Berlin was more to me than just shooting and then I had at once to Berlin, because here something moving and all the freaks, Also coming artists, and especially all the Drags to Berlin.

The East-West theme, I've never seen so pretty, which is also because, I know that hardly real Berlin. In fact, I've actually found a few weeks ago, that I just about 200 Live meters from the Berlin Wall. It can see itself, notice how little a non-Berliners the differences between East and West. Namely, as well as not at all. But all these questions I have already asked me and I was excited, think about how other people interesting… And there are a whole lot in this documentation:

Exciting and funny, the film was. In many parts it was almost more comedy than a documentary. It actually had all individuals, who were interviewed in the film complain about. About the City, on the policy, the newly arrived, the architecture, About “Scene” about … Oh really all about. Berlin is obviously boring, ugly and far far away from it, to be a metropolis. It nags good about Berlin…

Those who can not make it to Berlin, creates it anywhere

But you also have to say, that hardly any of the respondents came there directly from Berlin. They were so fed travels to the sum itself, and they were mostly certainly be able, to choose their center of life – and that was at the Berlin Herern and women.

In brief, there will be the film übrigend free to view on the Internet. As you should times daily, erlohnt to.

When I connected to Sheila for watching videos, We somehow got on Disney.

Although we actually watched a David Lynch film, the end of which somehow was his beginning and his supporting cast could possibly have been the devil – or just a comical wretch, which may be in different places at the same time and its main actress perhaps both times was blond and dark times equal… A slightly confusing movie.

Now I like simple things, just as, for example, the Walt Disney Movies. In our discussion of Disney Charaktäre we went through many Disney videos (Sheila has since quite a lot). And I had to find, that my favorite Disney movie is actually a fairly atypical Disnay-film. Clear Snow, Aladin, Arielle, and and and all for ages but my favorite movie is nice and stays Mary Poppins.

I can not even remember, when I saw the film for the first time. Ich war noch ziemlich klein und ich durfte für den Film verhältnismäßig lange aufbleiben 🙂

The film about the nanny Mary Poppins, that with all sorts of magical powers and a lot more charm, the two children Jane and Michael Banks should take care of the family. Now the two are not very easy to train and have one or the other nannies on the run, but with Mary Poppins is not so simple.

She shows them, that work – and even clean up – Can be fun. Mary Poppins makes trips with the two children, shows, that contact with the lower layer can be quite amusing, wins a horse race, and shows them that the support of needy can be satisfying. Michael learns, that is to save money not only because (I've somehow internalized) und Papa George Banks lernt, how important his family.

Normally, one wonders yes: “Now, what is the moral of the story?” … Tand Mary Poppins hat da so viele, that you can tell it not so closely.

Normally, a film, is so preachy, its really just slimy and bad. Mary Poppins is not both, but terrific. I love the movie. And I do not know of hardly anyone, does not even love him. But who may now raise his voice or forever.

I think, this film is probably also been one of the first, occur in the cartoon characters alongside real people. This is precisely also the largest factor, this makes the film unusual. Disney had otherwise rather all cartoons such as “Dumbo” or just all the live action movies just as the beetle “Herbie”. Meanwhile, there are of course more movies with animated characters and real actors (Space Jam Stage Roger Rabbit) but I think Mary Poppins was the first.

Btw. even such a cute and lovable movie like Mary Poppins may seem scary at once, if you could tailor the right scenes and the whole deposited with the right music. Also, schaut mal den Scary Mary Poppins Trailer.

btw. I again thought about. And of the pure animated films from Disney Peter Pan is my favorite.