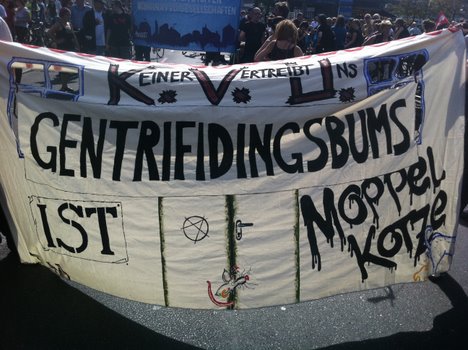 Gloria Viagra is well known as a politically and post everything in the area is important and wssenswert on Facebook. Sometimes these posts are also. For example, you appear to call for large rents Stop Demo:

…the weather is beautiful..
WHO SWINGS HIS ASS EVEN EQUAL TO THE BIG DEMO AGAINST MIETABZOCKE ..???
where you can meet ..?

…I had heard of it and I loose – just as loose also considered, to go there, but then very loose – also forget, Gloria's post but actually brought me to, my ass soar towards the subway Herrmanplatz take, then actually mitzulaufen straight home to Oranienplatz. 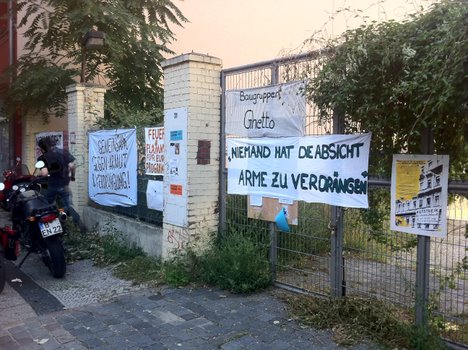 Somehow I think it's so difficult, turning up there, if I'm actually part of the problem itself. Only for understanding, I am a relatively well-paid man, has changed his sometime, that Berlin is great and that Kreuzberg is still great. I have just moved into an apartment in Kreuzberg at Oranienplatz and pay more rent, making sure, als die alteingesessenen Bewohner meines Hauses. Ich erhöhe damit den Mietenspiegel. I can also afford some Mietsteigerungsrunden so I'm complicity, if my neighbors eventually can no longer afford the rent. 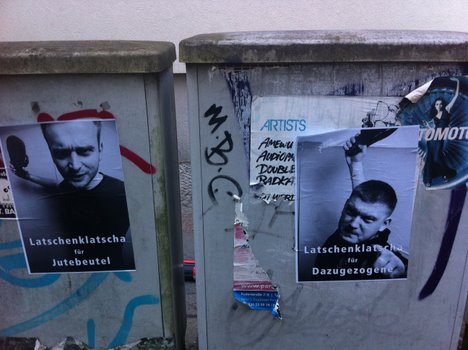 The golden piece of shit is probably (also) me… but when are drawn to actually okay?

After all, I'm not talking Swabian, does not mention any stroller through Berlin and also do not buy organic, sondern may Berlin as, such as Berlin is NOW. Nevertheless, I am the problem, even if I am of the opinion, Berlin also return some. 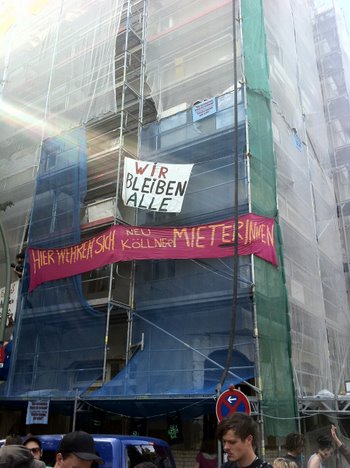 Insulation and 85% Rent increases, according to Flyers

But also as a problem, I can draw attention to the problem and it was only by the presence at the demonstration or this blog post, because it mch as I said went to Neukölln to attend the demo. 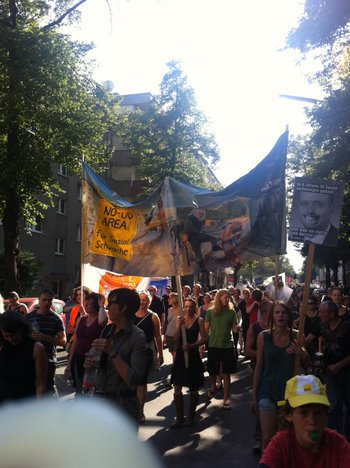 I came from de metro and stumbled once on information stands of the Left, Green and some further linka resettled parties and associations. I was angry and was inclined to look after of the FDP and the CDU, the – just before the election – wanted to determine somewhere attention to themselves. Political parties had lost absolutely nothing in my eyes.

It is believed an election promise, regardless of which party.
Not Künast

Really happy I was therefore made, as the organizers repeatedly collusion all political associations the right, accompany this demo with their flags and even went so far, that it confers any Demoinstranten the right. The standard-bearers “thereby to assist, take down their flags”. Even celebrities have lost nothing at the beginning of the train. Applaus von der Menge und Applaus von mir. Applause also for, these people – without flag – nevertheless glad to welcome at the demonstration. 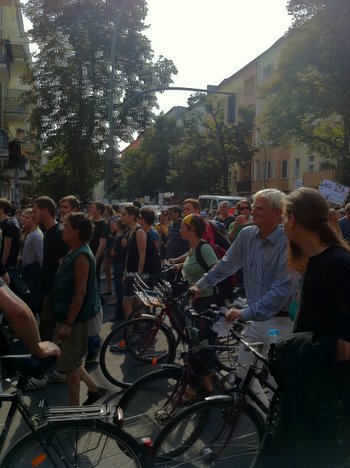 If I pick a politician's statements, then it.
No demo without Hans-Christian Stroebele and his bike.

I have no idea, whether besides Mr. Ströbele (and his bike), I salute to any such demonstration Prominent people let down any parties to, accompany this demo, but that really did a lot of people. The world spoke of 1.000, The Berliner Morgenpost of 2.500, also dan the police 2.500 ud the organizers of 6000… I tend to take a number, which is close to the number of operators, for I have let the train pass by again from the beginning to almost the end of me and it was really, really many. 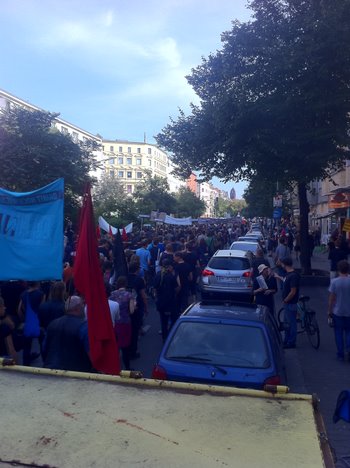 The initial demo is not visible

One must also make a huge compliment to the organizers, so viele Menschen zu mobilisieren, and to organize gleichzetig such a good demo. The train was not in any circumstances indiscriminately through Neukölln and Kreuzberg, but directly to various current foci over, shown and explained. 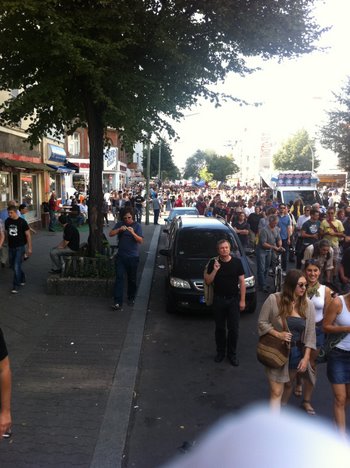 The demo does not end well

The houses were then in GSW, the entmietet and rots, Houses, be redeveloped luxury, Voids, which no longer exist soon, a town house, which has about three times the square or the CarLoft, that was protected to this day by the police and their dogs – Incidentally, the only point, to convert the spill, the mood was dangerous. Because it was pretty good all the way. 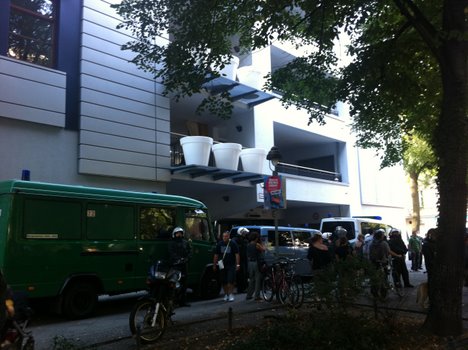 The CarLoft. Outgrowths perfect folly.
protected by armored men in green and their dogs

This does not mean, that people were not mad. I heard a few calls from people, which were themselves entmietet, who had to move because of rent increases or in some other way were very dissatisfied… And it was really a cross section of the tenants of these neighborhoods and not a typical left-demo. 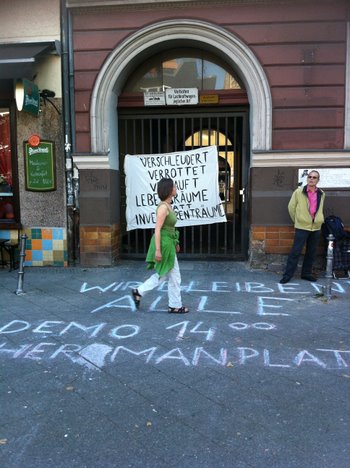 GSW can rot the building, to take off the last tenants

Okay, there were also autonomous, People of the DKP or make other comic, but these were clearly outnumbered. I also had the feeling, as if this was actually a demo, which is enlarged to the connector. Very well. Even if there were some strange looks bon balconies, but most were very impressed by the demo and show this also. 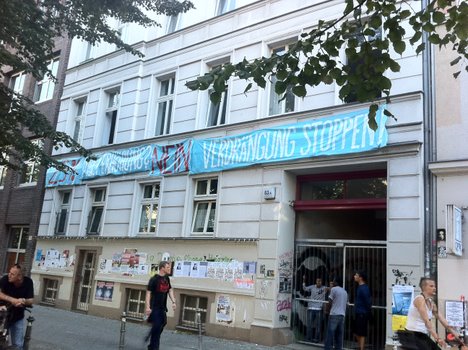 I was also surprised, how many Kiez, Tenants, Aid initiatives are. A lot! Good, that they exist, damage, that there must be they.

So kudos to all, who were there and the organizers, just a note, the next on a Sunday, it also occurs in the read newspapers on Monday… 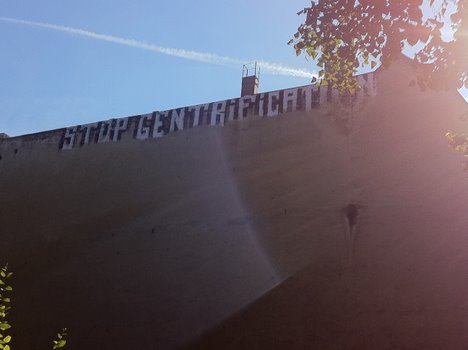