Last Friday, I'm clearly in the sun come home, So strictly speaking this Saturday and there was already quite advanced and nine clock. So I was already arranged around nine in the bed and at the time already for the next evening for Girl In A Hot Rod. 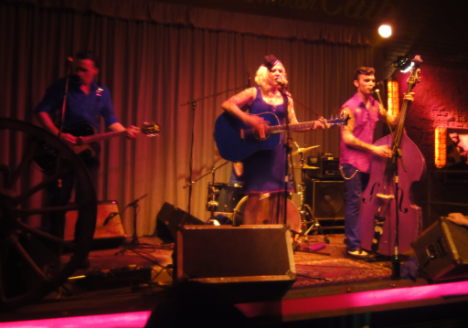 Off to bed and sleep, sleep, sleep… I woke up then to actually 17:56…., So just had time, to breakfast a Johnny Rotten Burger and a mojito in the Tiki Heart, before I actually had to get ready again. I am somehow mentally deficient, or?

No matter, I was agreed, and a woman can not even wait… Well, at least not for too long. Acute pain styling has then led to, I met Dani only against a clock, but also with your time was a Arschlochund not previously completed.

But what is it, when we arrived were the Cry Babies just started and there was still a lot of time, listening to this band Allstar Berlin clubs. With Trinity from Bassy on vocals and Wolfgang from White Trash on drums…. I had already seen the Cry Babies on the Swing Royal in Hamburg and it was really good… In this respect quite a basic, The Girl In A Hot Rod to visit.

But besides the band at this party there is indeed still a burlesque performance. This time by an artist, I did not know bisdato. “The Rubinia”. You should perform even not so long, but had a great idea and looked great. However, why they came to the stage already with an open corset? Suspected, so that the opening is faster… Because they have to work again turn, but otherwise it was very nice.

For us, then, was the evening at Roadrunners Paradise already two forty-five to an end and, unlike the day before my car already partte against three clock in front of my apartment…

Mrs. Pepper dräht in a circle and the wheel 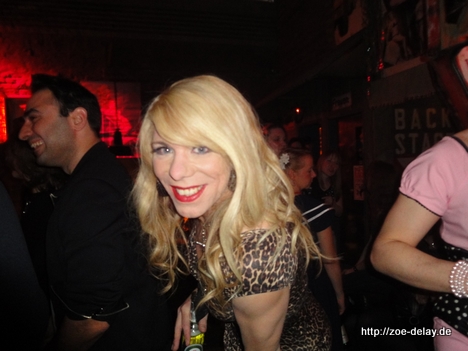 The Girl in a Hot Rod Party is now known to be a yes Rockabillyparty with great tunnel and corresponding thereto music from a period of just over 50 Years. In this small habitat amidst Loication, also Autoschrauber (course of Hot Rods) could beherbigen, has kept this music and other sounds rarely found there in.. This evening somehow.

However, this was not due to Hot Wire, Although not the classic songs brought to the stage, but gave more rock than roll songs to the best of Cheap Trick or Billy Idol, However, this more clearly than roll because rock. Billy Idol mit Rock’n’Roll Gitarre und Kontrabass. If that knew the old high lip puller. He would certainly smile… Also Hot Wire passten zum Motto der Girl in A Hot Rod. 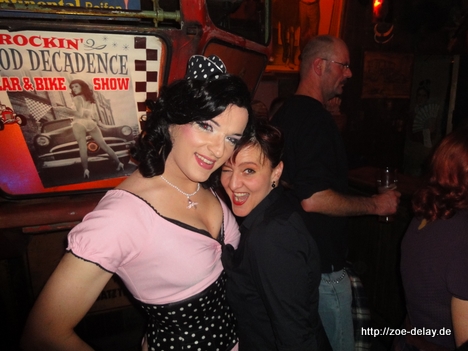 How bdei but the girl in A Hot Rod as common practice and tradition, occurs there ever a burlesque dancer on. That evening, the Calida del Sol should be… …But could not, and so apparently jumped out of hand woman Pepper a, man im der Queen Calavera nachtsagt, they do there always ruin everything… So, strictly speaking, says Eve Champagne,, However, the stage there is not always leave, as she found it…

No matter Pepper destroyed this time except for a glass of nothing, which could be related to that, the ceiling in the Roadrunners Paradise hangs a few inches higher than the Queen.. And yet Mrs. Pepper destroyed something short and zar the typical Girl in A Hot Rod music mix. And this totally Gaga. 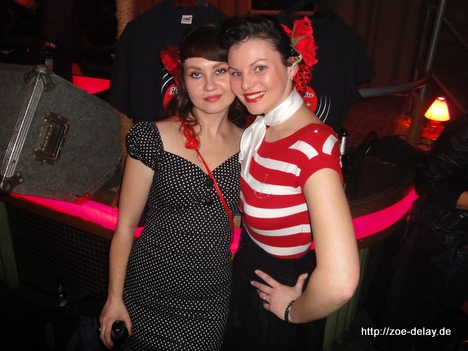 On the one with Lady Gaga, the other with an appearance, describe these four letters also perfectly correct. As a Tasmanian Devil (Taz) they turned over the stage and through this, went to a glass breakage, a chair broke the legs and not just anyone – and every woman – was lucky, not to be in range of your devices… The first question after this appearance was: “What has since taken?” The first answer was: “Do not know, but I want the same”…. Rather the appearance of Control – just totally Gaga .- and unusual for a girl in A Hot Rod Party. 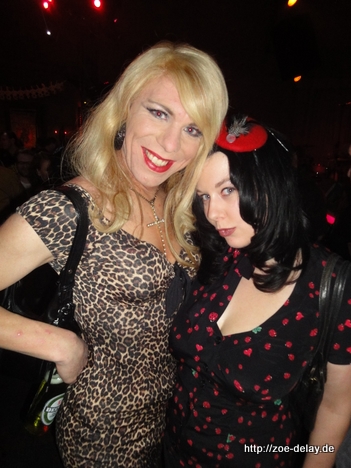 Speaking of unusual. A visitor to the GIAHR took me probably something unusual and asked me, because what leads me to a Rockabilly Party. People?, music?, Sheila?, Dani? Unfortunately, I asked – pretty perplexed – not, what would dorthinführen him because, because according to Dani, I looked more like this party, he… …und das obwohl ich keine Nadelkissen im Haar trug 😉

Definitely a nice evening, Later the walls of the club should have International 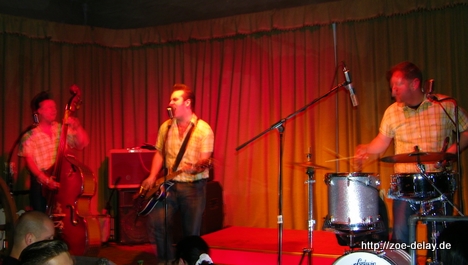 I'm back in the country. Since last Sunday 23:43 landed on Berlin soil. After two weeks of Cuba and a working week in Berlin that means to me three long weeks without mitgewirkte travesty.

In this respect I am – even if it means, that the holiday is over then – happy, to be able to be in Berlin and go out again. Girl in A Hot Rod stand an, for ice Popsicle party, we were once again invited, and especially 10 Years of AI. 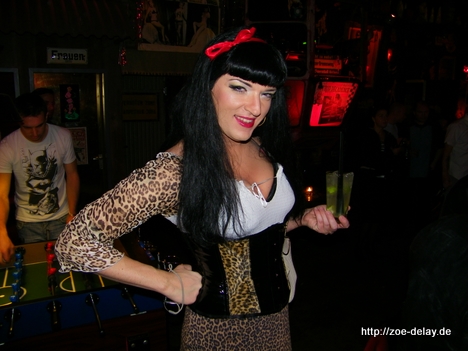 Girl in a hot Rod
it is now not the first time, that we go to this party, and it is always nice – where it arrives at the party, especially on the band, that occurs there. In this case were Danny & The Wonderbras, I liked exceptionally well. I'm more for quickly played musical output and Danny are & The Wonderbras obviously also.

We also had to get there early to make us even without loud music for a long time on each other's current and nice talk with Inga the organizer and put the odd drink to us, while we were on Danny & The Wonderbras waiting. A nice beginning of the evening… But do not party all night to stay there. 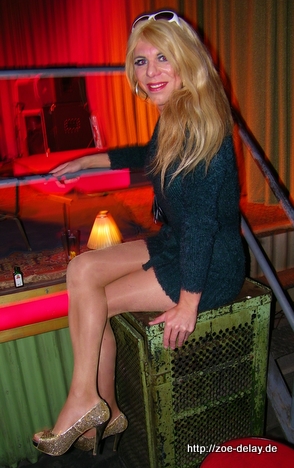 Ice on style
So we moved on to the Silver Wings, eigeladen and ear on the guest list, it goes without saying, look past there. While we were still queuing at the door we met Leo DeLuxe and somehow the present time is funny. So far, really only once – and also because very short – encountered, kam es mir so vor, than I would ever know it already… Facebook sei Dank.

Unfortunately, I somehow managed, wreck this evening my glasses. Probably fell down as my pocket the Roadrunners Paradise… now may make a – So everyone probably say – as you have a pair of glasses unprotected in your handbag… Eggs, Right have you. But since I have long contact lenses have meht übrich, I have resorted to me as … And actually, I waited a long time it, that it would go wrong somewhere….This time, it was so far. Broken glass… 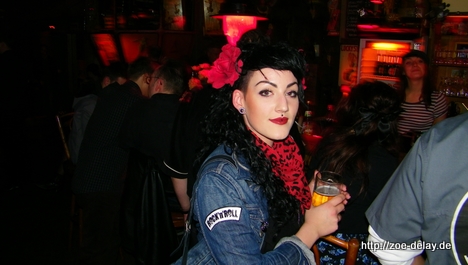 No, Leo's not the DeLuxe, but I have no picture

That alone is already stupid enough, but somehow I still managed it stupid cow, now while away the frame. Presumably he is still somewhere on the desk of the Metre de Eskimo Limon. Goofy, because glasses are new beglasen difficult, when the spectacles missing. 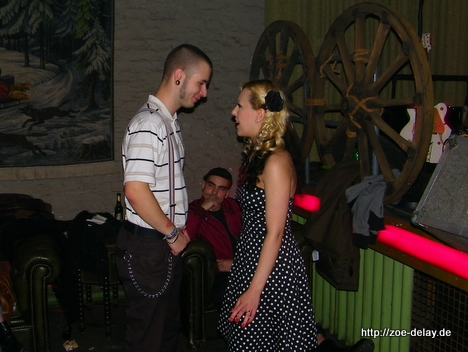 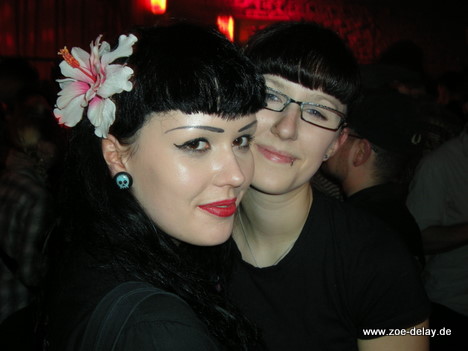 Last weekend was not really much going on in Berlin – at least there were not many parties, that sounded really great. So we decided to stop by again in the Girls in a Hot Rod, Inga großartiger Rockabilly Party mit Live Music im Roadrunners Paradise. This weekend there, the band Hot Wire, die natürlich Rock’n’Roll spielten, whose songs were fully known to me but. Soft Cell, The Cure and similar 80s music was the repertoire of Hot Wire. If not for the slightly different arrangement, could have got lost on a 80s Party. 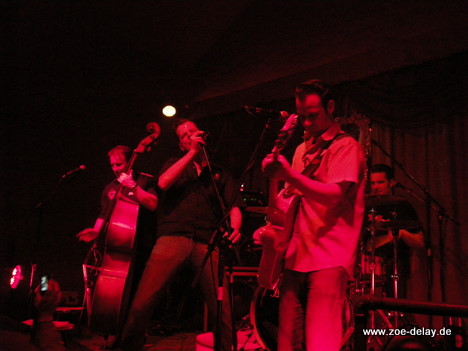 But only the music let it close, otherwise Elvis hung above the stage, on the stage, there was a double bass and the audience consisted of Rockabellas and Rockabillies. So everything was as always Girl in A Hot Rod. Only one was a bit different. It was pickepackevoll. The Roadrunners Paradise bursting at the seams and it was difficult, to come to a drink.

However, I still had another difficulty: I looked at my camera and saw a battery. Unfortunately, only eienn battery. The adjacent slot, actually to house an SD card was orphaned. Read! 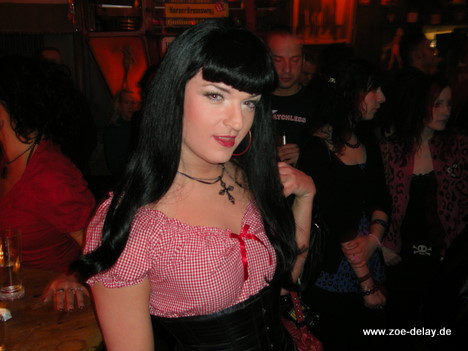 Goofy. Fortunately, Sheila had a 256 MB memory card in the car, I clawed me. 256 MB. I think I once had a computer, had the less disk. Nowadays, that's enough for a small three-digit number of images or a few seconds of video… Consequently, the present contribution has unfortunately without video of Hot Wire commented. After all, I have got done a couple pictures – though I've not really been properly understood, how to shoot decent pictures with it… There was actually little that night, what occupied me more than the wheels and my camera settings. …I guess, sometime when I finally win the lottery (although I do not play), then I'll build me a camera, that really makes everything alone – or do I buy NEN cameraman…. 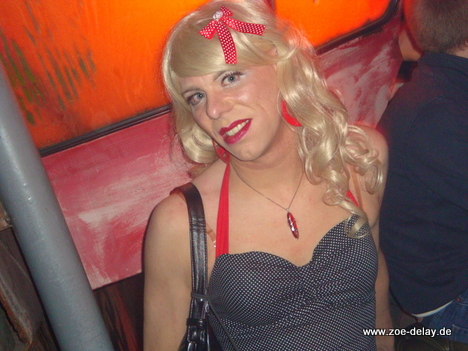 By Hot Wire and Lady Lou, and a visit to the Blessed Sacrament of the Roadrunners Paradise, the backstage area, we parted for an unspecified time absolutely important and irrelevant visit to the bush around us to adopt it immediately to the cinema and the International Club International. Somehow, that was clear from the outset…. 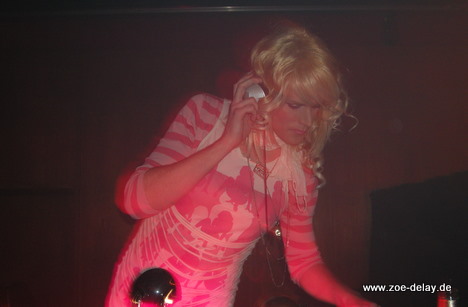 If nothing comes of the International Club is always. Although the party is like any times better and sometimes worse, That evening she was again better. There was nothing to expect and just because of this NON-expectations the party was once again really good. Gina Tonic played great music, one – she said – completely unglamorous Vickie danced with Mr. Kroft, that one had to wonder, if he was not perhaps someday would betray ;-). Well, and of course we danced with. 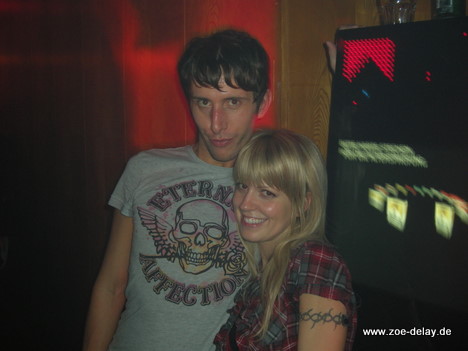 We schnackt with Alexandra and Barbie, I met Aglaia, which has provided me with so Trannywerbespots long time ago, I had a long time to blog something – itself, when I had nothing to blog, and generally the party was just cute. The AI ​​is really worth a visit and is rarely right next to it. 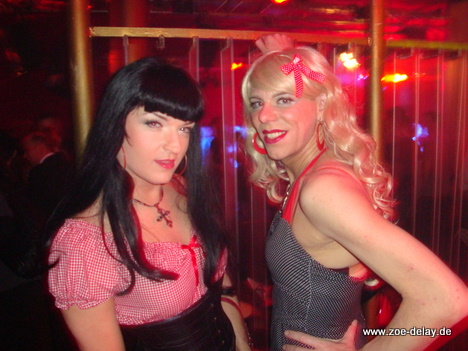 Freaks but then went an attempted photo shoot at Checkpoint Charlie. It was cold, It was dark, the images are blurred and easily become nothing. Too bad. We probably need to repeat times.