What does a drag queen berlin, when the typical Weekends-peer group drives around in Zurich? Well either bored or open other unusual party ideas.. With such a Dani came up to me. To visit two Goth parties in Berlin, ever since she found no people, that would come along… 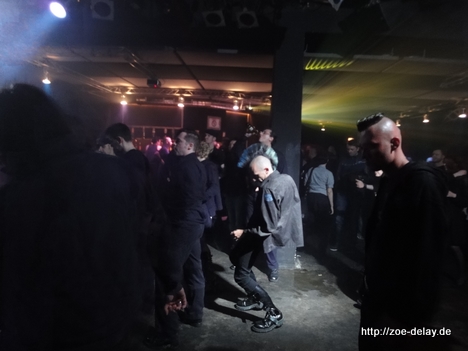 Goth parties? Hmm to such parties I was not already really long. The last time that should have been in the Hasmburg Roxx. Naja Vor Langer, long time now and Zillo, when there was the Hamburg. So why not, Musically, I am extremely adaptable, if it does not become a habit, I can be both a German night to hit as hard techno to dance to my favorite music without being unfaithful, So I can without problems also once an evening of ecstatic dancing to black music and let me make the incessant strobe use Mallig in the bulb.

So I got me a place on the guest list for the K17 BLACK:RE:BOOT Party in Friedrichshain. Surprisingly, how many assistants there to hang out at the ring center at the train station. It has long been not occurred, that I had caused some uproar gedresst. Now there seldom strayed down a aufgetackelte tranny with short skirt. Does not matter. I wanted to get just money and Dani was fortunately also directly. The operation Goth Party at the K17 could start. 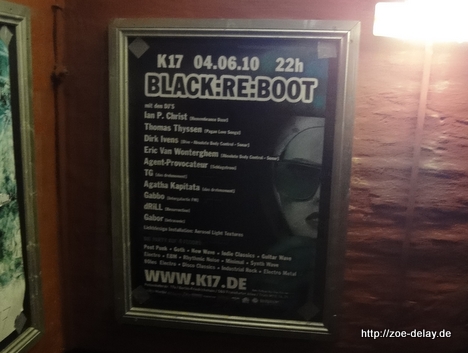 According to Dani ran earlier because often times around Trasen, That evening, however, not, what then probably one or the other to the Goth look stupid verführte.Ich have of course heard nothing again, but it was told to me. But it could also have been the general astonishment, when I swung my hair once again through the area, they got someone in the face and then looked once more precisely the one whom he owed this.

Me! Where we were a comic troupe anyway. It was a friend of Dani here. Dressed normally and rocker mat on the head, Dani with short skirt and …let's say – offensive – Well cut and I just. You may have wondered, how we fit together well. No matter, we just not fit exactly to the design of the usual guests of such party. 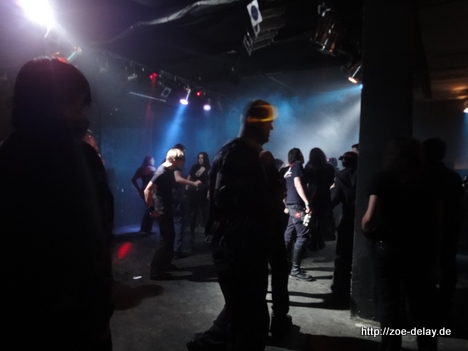 It was really clear to me, however,, I talked to the ladies room with a girl and I would not have the best of intentions can say afterwards, by which. The description: “shorter than me, shoulder-length dark hair, corseted and dressed in black” arrived at about the 75 % all girls to, on the BLACK:RE:BOAT were present.

For one evening, the music was actually really exciting, I must certainly have not weekly, but it was cool. Although I did not know any of the bands and the music styles could not tell them apart, and as you(n) wondered, whether the DJ already properly “Noise” had played, I had to shrug their shoulders. For me, it was all noise. Nevertheless, I retreated later on the Floor 4, where instead of black electro darkwave rather was played. 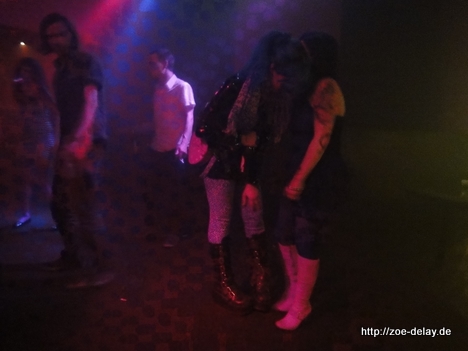 Damage, that it was so dark, the punk had a cool glamor punk style

With my love for punk then still a little compatible, also without the Mallig-making Strobi in constant use. The K17 and the BLACK:RE:BOAT but were definitely worth a visit, and it was already bright, when we later moved us to another visit another location. But for more tomorrow.

At times I write something, nice when people ask me why…. If this written even come with their own text around the corner. The better.

So yesterday I found a text in my mail tray, derived from Denise Van De Hoven and indicates the Wave Gothic Treffen. You and Kerstin and Mia and probably a few others from the Clicque will be there again this year. Are they actually getting….

I myself was never there, but judging by the pictures, is this a bug. But Gothic has never been truly mine… Btw. Denise is the Wave Gothic Treffen, neither in league, not related by marriage or. But just like always, and again there.

Drags and Trannys on WGT…..

When men meet at Pentecost in Leipzig and surround the eyes with dark eyeliner, when feminine curves are formed by corsages, The platform shoes are shined to a high gloss and is located in chiffon, Tulle, Lace and brocade dresses, this is not a meeting of the tranny and drag queen scene, THE festival especially the black scene…. The Wave Gothic Festival.

But is not that the black scene black like all my. One “colorful” Meets people, displays and celebrates itself 4 Days.

The festival-goers are so different, how can barely walk different.

For the exterior of Betrachetr, difficult to distinguish.

The sexes merge all too often in the exterior, as the ddas it is hard to say, who what now, welcher Richtung er angehört und was Er oder Sie darstellt 🙂

But that's what makes this festival into something very special and unique in Europe and Germany.

Tolerance is not geprädigt here, it is part of the Wave-Gotik-Treffen.

Whoever does not know exactly what he's doing at Pentecost…. I can only say…. off to Leipzig and shows you…..

And who knows?, maybe we meet yes on the AGRA, in Kohlrabizirkus, in the MB or the other venues of WGT, welche sich über ganz Leipzig erstrecken 🙂

Looking forward to it ……

see you soon …. Denise Eure of the Courts

There is in exactly two important and worth visiting parties, would probably carry the umbrella term fetish, firstly, the German Fetish Ball and other Boheme Noir and the latter was just the weekend. 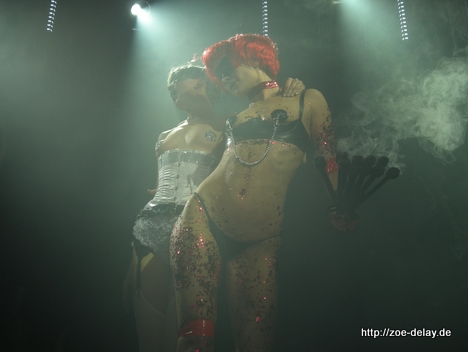 Unfortunately I have not managed, to name the winners of our raffle to my blog, because I went to Hamburg on Friday to celebrate his birthday in eineme friend… So Eien Boheme Noir justifies but, already back on Saturday to go on the highway aufzuschlagen to the evening there. (Sheila has notified the winners by the way). I had planned, approximately 11 there being, and 23:05 I drove past the Jannowitzbruecke. 5 Minutes late on 280 Kilometers. A good cut, I find. 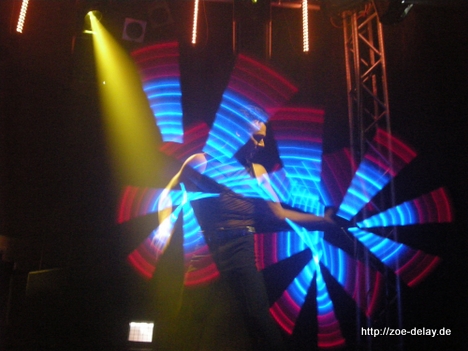 Gedresst finished I had been to Hamburg, where, in addition, I also had to buy the Morgend yet…. I had actually ordered me a nice pinstripe dress by Lip Service, but found, that I was late again, and the delivery times underestimated. Nun es kam nix bisher – and as the Hamburg visit was not only the birthday as a reason, but just drop a visit at the Hustler and Boutique Bizarre on the Reeperbahn. In Hustler I found a quite attractive PVC dress with pinstripe also. A still more beautiful dress I had found in the Boutique Bizarre, however, this was also made of latex and then was just under 500 €.. a little too much, for me. 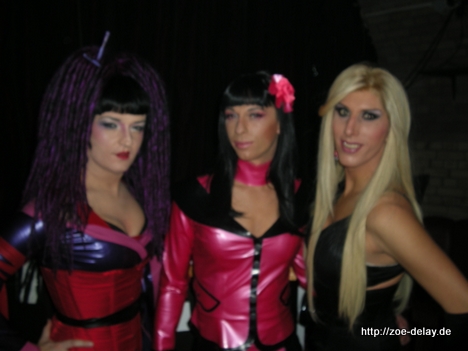 But not for others, as I could see on the Boheme Noir. There, guests will really contributed once again, what the wardrobes and thus the purses hergaben. Greatest creations and Dresses any Coleur. Lack, Logo, Latex, as well, Leader, Clear, and burlesque and Gothic, Cyberesque, Uniforms and what I still remember everything. A colleague asked me today, whether they, as they ran around today (Street clothes) would be entered as… …I do not know, at least she would have definitely felt completely out of place with all the great costumes. 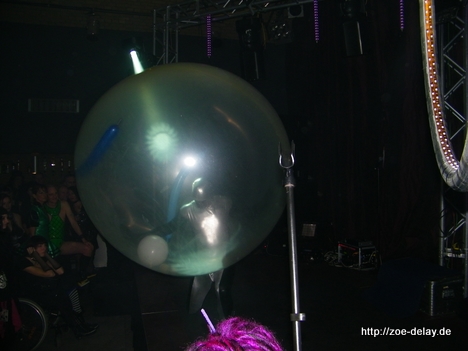 For each, the words and images of the now expected, I'm sorry to disappoint. Boheme Nior images I can not unfortunately offer. Although Alex was kind enough to equip us with photo passes to shoot the show, but asked, guests not to photograph, which is indeed a shame but then of course. Provide explanations should come no one, what has he to look at a Fetsichparty – and especially how he was there… Da Tara, Eden and Ardor are but anyway frequently represented in this blog, I think, the picture is clear.. 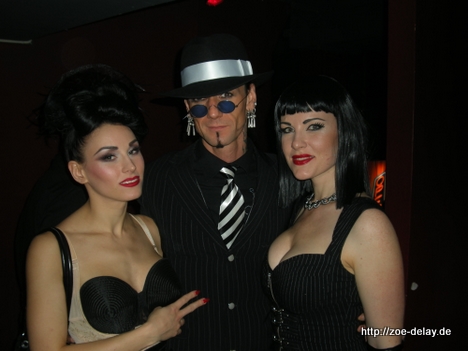 A party of this kind any more lives of the guests and as Alex has great marketing together to get through a great mix. There was recently an interesting but hardly Party, where one has not seen the Boheme Noir image as a poster or flyer. Best Party ist eben learn, if the marketing did not ensure, that the target group finds out. And that was just there. But in addition to the guests and the trappings is important, for example, shows the.

For example, the Fireburlesque show HayDee Sparks and Calida del Sol, which was very beeidruckend and left. Had I ever been to a burlesque show goosebumps? I do not know, but this time I had briefly what. Overstimulation of tones, Colors and performance between heaven and hell, wherein at the end …. winning. But look for yourself. Great Cinema.

Nevertheless, we left the Boheme Noir at half past one at the Mad House visit, that should come up this evening with a great show. But for a second time…. Who gut allerdings Boheme war, already shown by the fact, that we later came back and I got home only about six clock. …Simultaneously with my neighbors, although it looked stupid, sich aber ansonsten nix anmerken liess 🙂 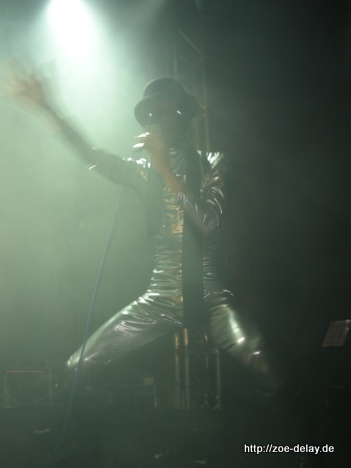 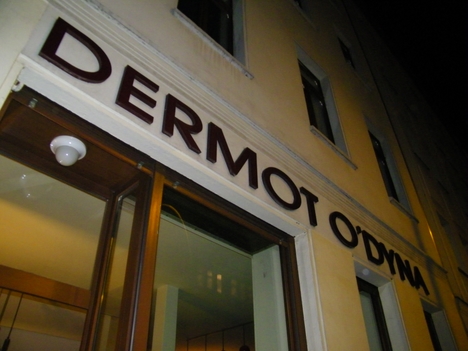 It was Saturday and, moreover, a third of the month. Irrenhouse-Samstag also, previously there was still some ways, to let the evening einklingen. For example, at an exhibition opening at Dermot O'Dyna, transformed into a hairdressing salon of its exhibition space. 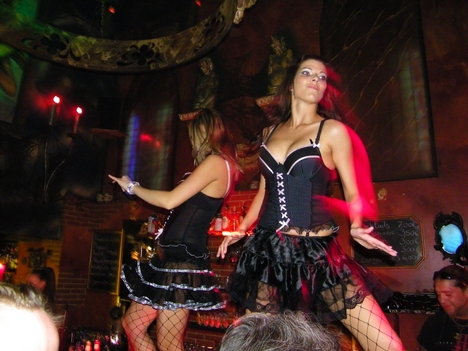 But first, the usual parking search was run erstaunich good, a few meters walk and a car park, Although the a “Here you go because not because Marathon Parking” Sign was ausgesatattet, but what the heck, yes do not run at night and in the morning we did not have before anyway, to be there. …Actually, we were not much läger than one drink, some photos and a few interviews…. Woran lag es? On the non-art, because I found a lot more appealing than the last year… Rather, we wanted the birthday of Alex van Hesse, the Titty Twister Night Vol.3 took the occasion, reinzufeiern in his birthday. 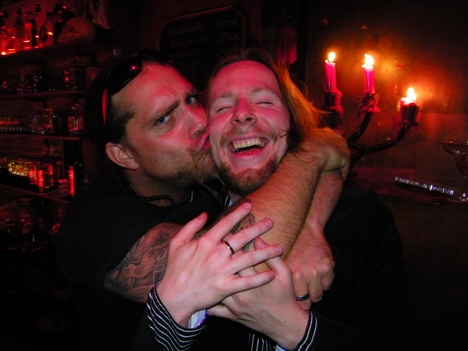 All took place right next to the White Trash in Last Cathedral, Load a pretty stylish furnished Gothic. Coffins, Skulls, Skeletons, large candlesticks and the like. Who thinks black is there really. Although I had never really with the black scene, impressive, I found the store already indess. Just as we arrived we heard the happy birthday song and we could classify as directly into the crowd of well-wishers and Alex a happy birthday… and there were a lot of people, one has met on one or the other event. Martin Cutter, Liz Vegas, Carina and and and. Berlin is after all very small – over and over again. 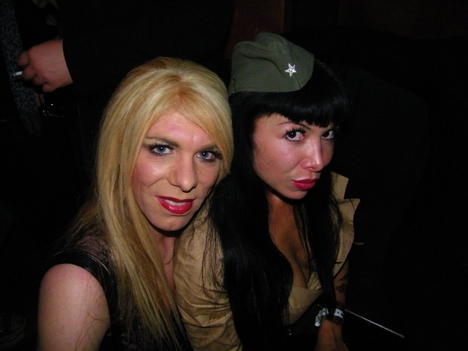 When we eventually disappeared in the direction Irrenhouse we took for the road, one “black box” with. In some drink in a – not surprisingly – black box. This was told to us, there is no guarantee that taurine be splashing around. Unfortunately, that was not all, what was missing, but also still in doubt, good taste and also alcohol. So this stuff would have been certainly better Kreuter. I stay because he prefers bdei Red Bull. What remains: Alex is still young, Martin holds Kesici made for Sheila's breasts, Liz Vegas looks in blonde from completely different and the Last Cathedral is a cool store, even for a not very black person like me.