For several weeks Sheila distributed flyers for an event for the premiere of Burlesque film Tournée fom, should not only be shown, but also some mi Burlesque performances should be relined. 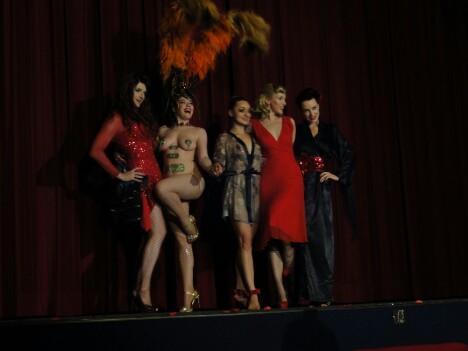 From their film had read a long time ago. Tournee is a film, in contrast to “Burlesque” tatsählich also has to do with burlesque, with real performances and a story that is not just once Cinderella, mit Charaktären, Burlescue with real artists and with a certain dose Trash.

I find good. All this should take place at the Thalia cinema in Potsdam and it actually came all sorts of visitors, significantly more definitely, would have been expected as the premiere else. For it was the visitors but also offer some. 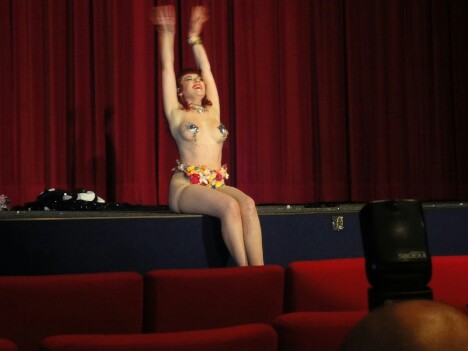 Sheila herself, Ginger Synne, Tara La Luna, Lada Redstar and Lady Lou occurred and Gloria Viagra should try a little later, to keep the guests on the dance floor. …The latter unfortunately only worked as mau, as the guests after the last number cinema Typical moving right direction and output were gone. Although some leftover danced abundant, but prolonged the after-show party then but not significantly.

No Parybewusstsein, of Potsdam. This is probably also the reason, why the ladies and gentlemen live in Potsdam and not in Berlin 😉 But it doesn't matter, for it was on this evening just it also all about burlesque in film and reality and started with a number of Sheila, I have such a scchon seen a couple times, what is so mainly because, I'm often there just, where it occurs just. 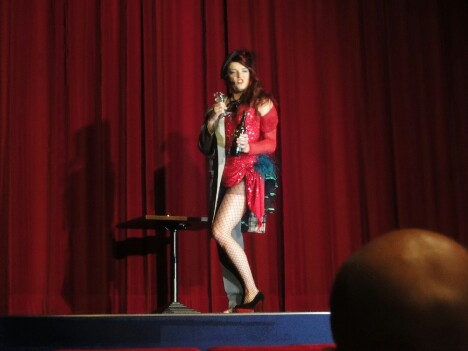 Was so exciting for me, what happens because as noh, such as in Lady Lou, that came with their first number with eienm really great outfit on stage and – as befits a burlesque number – future to fully defoliated and then also artfully clothe himself again to collect the deserved applause.

No war toll, but no comparison to her second number, was found in the, that Lady Lou is not only a great burlesque artist, but in addition also a super heroine, that the soils of the world makes an end with all kinds of weapons. Super Lou, so to speak, and the lady has actually saved the world in this case. Thank you Lady Lou that you take care of ourselves we

Two great numbers there were of Ginger Synne, in their numbers wrapped the audience with a lot of mysticism in both numbers and even more secret and unwrapped himself from a long estaunlich becoming costume

But all this was nothing compared to the two numbers from Lada Redstar, they were just great, … Not only the numbers, but also the costumes were truly breathtaking and certainly in the price of a small car. So yes I know, which cost my Zönix costume with his wings then, but against the corset and butterfly wings, were simply incredible. I love the costume and of course the number. Both are really really great. The video you have to watch absolutely.

But the second number of Lada Redstar – and her second outfit were more than impressive. A huge Vogelhut, a dazzling outfit and every defoliation again new things, wo man sagt ” wow ” great idea. honestly, the two numbers of Lada redstar warning with the best, I've seen Burlesque numbers. Since the film Tournée could not gegenanommen.

Also, if I'm rarely in the movies, I get it from time to time with, what's happening so. 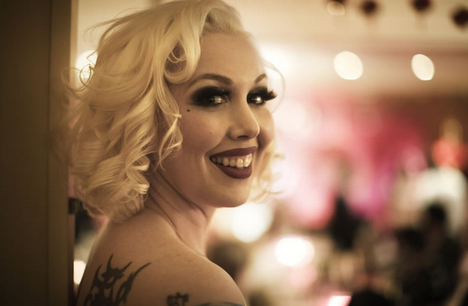 Not in cinemas THE ONE but in cinema in Cannes runs to time – speak today – an exciting movie. Tour bzw. “On Tour” opened for Robin Hood, played the Out of Competition, the Cannes Film Festival. And why I write about?

Now On Tour covers the New Burlesque area and shows the real tour New Burlesque artists from the USA. However, it is not a documentary. The people are real, not the story, tells the Mathieu Amalric. 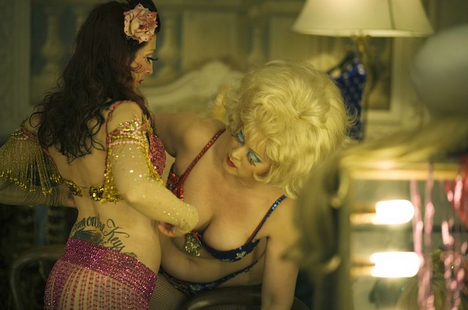 Marc, a French TV producer, he himself plays reliably France with the great hope of a glamorous and glorious return. The chance of it he hopes to, after he meets a group of New Burlesque dancers in the U.S.. With you and a unique show he returns to France on a Tourne, which is to find a big final in Paris.

It would not be a good movie, if that would work just as. The family and business partners do not find it sparkling, that he pulls with a force-SRIP by France. Somewhere on the coast of France, the tour ends and it looks to an inglorious end of. – No glamorous return to France. 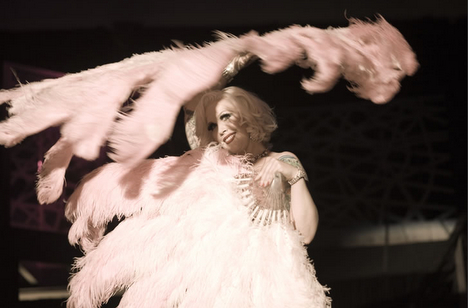 Sure you can learn burlesque, but that takes time and whether it would ever perfectly with actors? Insofar as it already makes sense then, sich echte Tänzerinnen zu besorgen um solch einen Film zu machen. Mimi Le Meaux, Kitten on the Keys, Dirty Martini, Julie Atlas Muz, Evie Lovelle show and Roky Roulette, how to do it right and who knows, maybe soon they heard a palm tree, when considered as jury president Tim Burton film as good enough. 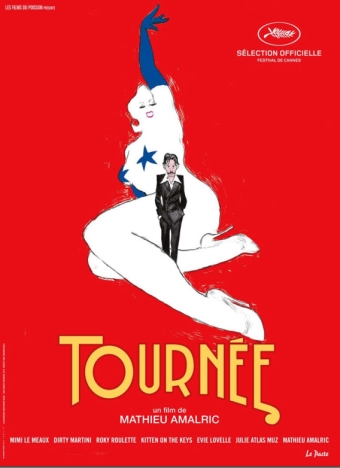 I've seen the Rocky Horror Picture Show, probably countless times, I know the dialogues and the songs auswending, I saw it as a film, als Musical, as a school play, in english, in German, in English with German subtitles and multiple as a film with a fellow Rocky Horror Cast, So a fellow troupe. 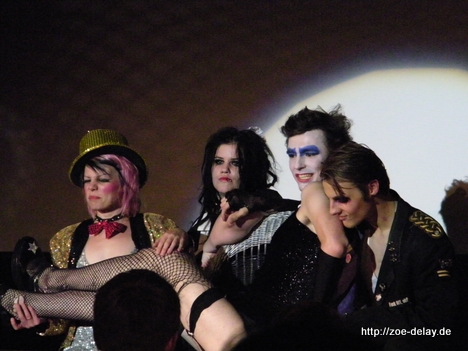 The actual movie then often gets caught in the HIntergrund – at least then, if the cast is good. And there are really big differences. Predict it to anticipate: The cast was not the best, I ever saw, but the show was pretty good. 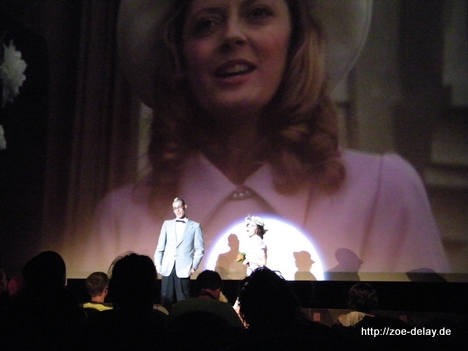 Sheila had bought seats on the guest list, but remained at a private birthday a customer of Janka hang, so I made my own as “one of +3 on the guest list by Sheila Wolf” on the way to Babylon cinema. Goofy only, that neither the name nor anything of any +3 was known at the checkout. A quick call brought me but in..

Actually, I was half an hour late, but that did not, for the first half hour was spent with any of the Rocky Horror cast and arrived shortly after I started the film, and thus the show…. 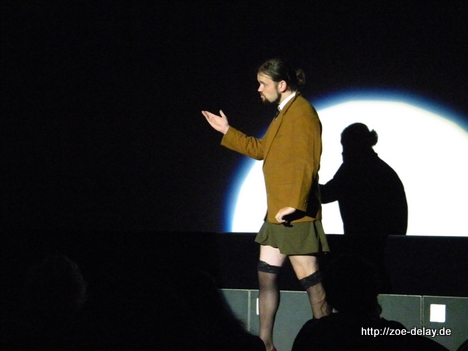 Like the case of a recurrent event is unfortunately often the case, was the auditorium at Babylon #1, probably one of the most beautiful cinemas in Berlin only moderately filled, However, this then with hardcore Rocky Horror fans, knew all the sayings and applied that also… 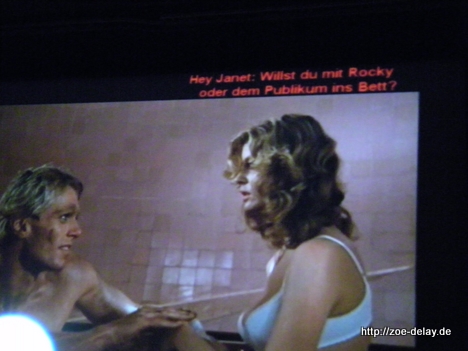 Too great a knowledge of the show was there but not at all necessary, because the film was good headlined by umm…. Of course, it was the English version (I hope there are no German, or?) matter in any case, there were white German subtitles, for those, that the film is not anyway 100 Should have seen – what that night should not apply to many. 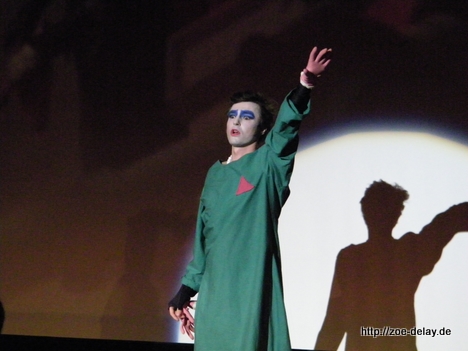 But were much more interesting over the red title, the one supplied with all the important information about the film. For example, the information why Brad and Janet, especially “wet” were, what contributes to Janet in the hair, who should get the Oscar for best supporting actor, where the film has flaws, where – due to the budget – Actor appeared several times and even warnings, when boring scenes were to be expected. 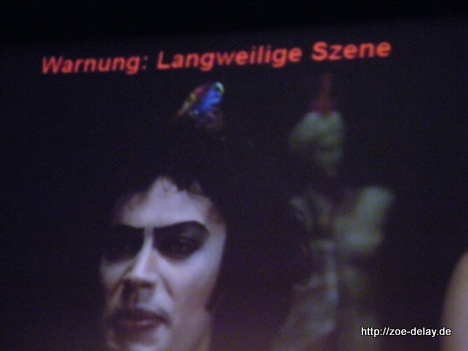 course could not be missing the instructions for the audience, But that only means so much mitmachte. Despite the lack of newspaper I was barely wet and only very little rice landed in my hair. Even when the naturally everything obsessively belongs to Rocky Horror Show, I is in this specific case – in which I had none of that here, not say, that really bothered me.

However, what bothered a bit more was the fact, that the stage under the big screen was not too high, So you could not always see really good, what went right front…. and that was partly funny, as I already said above about the cast. 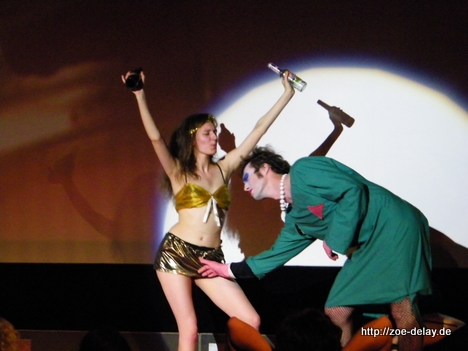 Rocky, for example, was a woman … which, although part of the “And in just 7 days I can make you a man!” makes it exciting, but somehow there was a little against the bill. Instead of using dumbbells weight was lifted with beer bottles, The narrator was in a skirt and nylon stockings, Dr. Everett Scott did not brake for aliens, and from the Denton shield was a Shield Berlin. Overall, the cast did their best.

So for the fan, the hardcore fan and the novice is the Rocky Horror Show at Babylon Berlin worth a visit. You will certainly learn a thing or two. For example, I previously did not know, that you throw with sponges. The one that does, however,, but seemed to be general consensus. I need to see the same again, where and why. Maybe I can have someone there to assist. 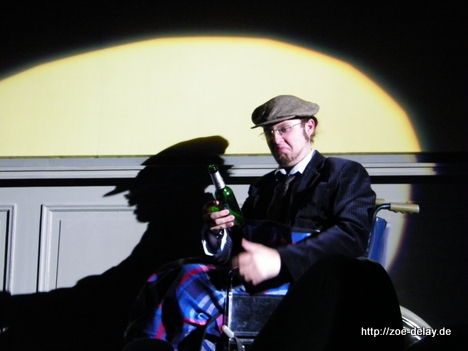 A few minutes before the end also appeared Janka and Sheila, who had meanwhile also collected Mel in Babylon. Since they were not much allerdinsg with, except for a little chat with Max, the creators of the show…. Well known punished the, comes too late, yes life. Now, this had already experienced something else. Among other, Tara La Luna in einer burlesque Performance, Dame, to the beginning of the show defoliated on stage was not sure about turn, but was also worth seeing. As I said: nett war es. I will certainly visit again. 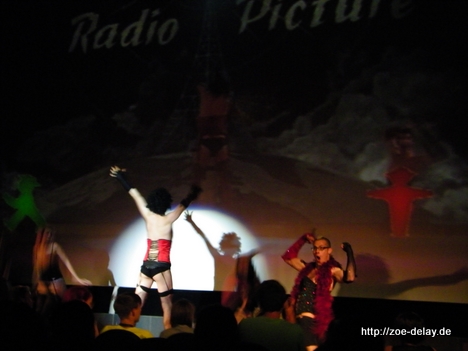 Then we made our fairly quickly, however, on the way to the Goya for party propaganda… But more on that tomorrow. 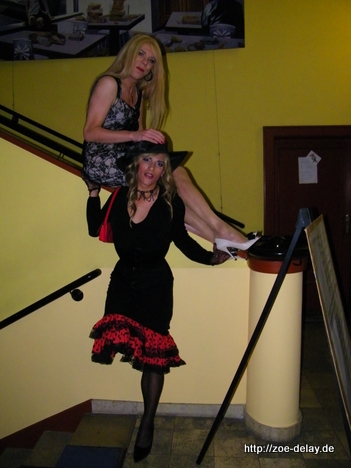