What can I say. I love the Kit Kat Club. He is the world's best club – but at least in Berlin – and somehow I am now every two weeks there – know a lot of the regulars and the bouncers know me. What can I say: My family club and I stand by.

Well, and if I'm eh gedresst ever leads me my way to a previous event about 98,74% at the end at some point in the Kit Kat. After the Berlin Burlesque Festival it should also come as.

I spoke at the festival with a mother daughter duo from Hamburg, who were there, each with their friends and the deliberate rather quickly, come along, when I from my other evening plans told. The mother's friend had no desire and disappeared into the hotel all the other three were but happy with, But although only the (very cool mom) pretty much knew, what might have been expected in such Kitty.

The problem with spontaneous visits to the Kit Kat is always adhering to the dress code, the fit so directly only reserved for Mama. Since I anyway wanted to do even a short trip home, I just took all with and pimpte all a little.

I gave ado a short skirt, a pair of stockings, leggings and especially my great since 25 Hot beloved Schottenkarojackett, that belongs to an entire Schottenkaroanzug. So that suited some extent, and all came without any major problems purely.

It's great again, people watching during thawing, when they visit the Kit Kat for the first time.

The friend's daughter was initially very surprised, why should one e leggings worn and had convinced yet, that the shirt under the jacket still got away. At first he has yet resisted, he was convinced no later than half an hour later full of Kitty and understood, why he was so funny bears shows and found it quite normal.

Mom went at some point and the two bieben in Kitty and had fun in the evening. When I went to nine, it was not staying two late enough and they wanted to – I hope you have had the hotel checkout in mind.

When I went I have the two – because they could not find on the fast her wardrobe brand – leave my clothes yet for the evening – with the great promise, that they would send me everything…

I trusted them. – And never heard from again….

The evening was great, but I grieve for my jacket and therefore, I have once again lost a little faith in humanity.

God, the Olle is hard. But I am too

I was recently Juliane in Frankfurt from, and Denise has since through social estimate what kind and for the 26.09. logged in Hamburg. Denise in Berlin ? Cool. There is on Thursday but the House of Red Doors. And since I have bought anyway as a precaution two cards, why not. Maybe the ol has indeed Lust, come along.

The House of Red Doors: Vintage Circus from Bad Bruises on Vimeo.

On Thursday, and on Friday and Saturday also. The old is insatiable

Because the evening on Thursday was so nice, we visited Monty still on the Piepshow in Kit Kat, and how this party in turn was so boring, we sat still the same Saturday in the Kit Kat hintendran. What to do.

Because Denise still working in between had and it should be somehow fair, I remained each a whole lot of hours later at the parties, while they slumbered already saved. Early to get out of parties is not my super power.

In the early dawn, sometime around four we left the K17, sat in the car and drove towards Sage, Strictly speaking, in the direction of KitKat. There should be this evening the Dark Friday and thus are a friend of Daniela behind the mixing desk, which should have a very positive impact on the admission and drinks their situation. 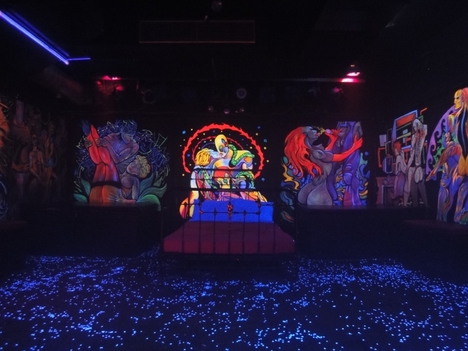 But before entering the love of God – In this case, the doorman of the KitKat – set the inlet… And that should make it difficult. Not necessarily for me and Dani, but for her buddy, the gedreistete with jeans inlet to want to KitKat and therefore the dress code contradicted himself. “Jeans with no inlet”…. Goofy. He could even take off, a cloth over it would be possible, he would get even provided… Not so with Mrs. Zühlke.

I do not know, what she told the doorman and the lady at the cash register so everything, but I believe the two were happy, as they then him – mit Jeans – and this fury was let in peace. The lady at the checkout said then, “what is missing in him she has – it is a bomb” pointing to the already mentioned as offensive excerpt, but could also have meant the explosive force, they – Once ignited – can develop. 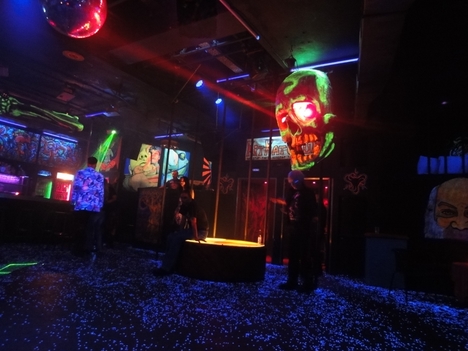 So much trouble for nothing. For the KitKat or. the Dark Friday was extremely emptied, when we came. Hardly any people on the dance floor, fortunately no nudes and no copulating couple on the mattresses. Obviously attracts a Dark Friday is not familiar to me so far, the audience KitKat. That makes it not necessarily worse.

So I could umm times the “interesting” Pictures, which sparkled in the black light undisturbed opportunity to see and licentious dancing on the dance floor – without anyone had the problem of my hair in his face. However, an empty Kitkat with the almost pitch dark electro fasted state is nothing, I need to have weekly. If I want to go there again before I drive my car home and get drunk – maybe then I can feel my feet less, which began sometime around seven clock or to hurt so. I wimp. 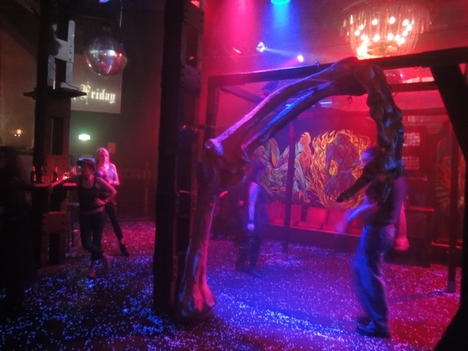 The evening ended with a fourth to aufgegabelten very sweet girl in a Turkish restaurant with Turkish pizza, and chicken kebabs and discussions around Berlin, various Berlin bars, Districts and dominance of different people on this evening… This breakfast made me shake my head more than once.. and ask me whether the time, why I did not like Sunglasses… I was then about nine in bed