…I'm diligent reader of the various Bullettins and newsletters, Short messages and relevant gazettes and so escapes me at least not in berlin too little, such as, for example, the fact, that Margot Schlönzke and Kora van Tastisch some time ago in the AHA sort of a best of 5 Wanted to give the best years of combined travesty.

In, Why not. I had been the only woman on her Schlönzke Song recital seen, Mrs van tastic but not seen on the travesty boards, so far as one could see times.

…Now my wife has invited Schlönzke so freely to her recital, such a sweet invitation did not come this time… Was she perhaps because the effect of the program or uncertain?? Well I'm there like a restaurant critic. Uninvited and unnoticed at the most critical.

So I came to the AHA, paid my contribution to this show, einen Club Mate Ice Tea, flipped in the blu and the Victory Column and waited for things, that there should come as. Finding a place was this time not really difficult, because at about 12-15 Besucherngab there is sufficient availability – However, not enough opportunities, to escape the two main actors on stage, because you should watch a little, if you spend an evening at the two. It could be, that one finds oneself at once before but not ON the stage and unintentionally become part of the show… Fortunately, the chance of that happening seems slightly larger, know if the two a. Unerkanne and uninvited seem to be there a little safer. My luck.

Now, I was luckily not to be taken into consideration dragged on stage and could thus pursue undisturbed the show from the perspective of a spectator – and film – which in turn was not unnoticed.

However, it was once again in this idea, how easy the differences between Kreuzberg and Mitte travesty / Friedrichshain travesty are Nix Madonna, Nix or any soul diva Kylie. The AHA is sung German and the songs were all old but already a bit longer than the specified 5 Years. Well that does not have to be bad. Just classic and so far it is just not in it, to move as coherent mouth but a show to tinker around it and the Masses 12-15 To captivate viewers. But they have really done well.

Even if I only one of the Best Of… Knew pieces I felt entertained. The one that I knew the way, was the following piece of Egon, that KoRa van tastic and that I was the best on the grand Gender X Documentation first saw – and now could actually watch just once as a live performance. Class rather.

At the end there was something, wass there are any good transvestite revue and for the Mary Morgan is probably the most famous. A number of will be washed off, the jewelry and disappears at the end of the wig is recognized even. So if you want to know times, as the person behind Margot Schlönzke really looks like, then the following number is for you. Just once looks in.

I was then detected incidentally still. There are simply too few people, the mitfilmen such an event and KoRa saw in me then but Zoe, the most “is without a fumble since, so that we do not recognize”. Marhot and wondered how because that would, they would have invited me but not at… ..As I said, now and then I come uninvited…. This does not of course, dass ich mich zur Fledermaus nicht über eine Einladung freuen würde 😉

Also, It was a fun evening and both deserved some viewers more… Also schaut mal hin, if the two do a show.

I had recently under the heading Homophobic attack in Kreuzberg read?

On the night of 07. to 08. Drag the festival took place at SO36. As the last guests left and the SO36 was on close, was a group of women / lesbians on Heinrichsplatz by several men, consisting 3 passing cars jumped, beaten. One of the cars had a sticker of the fascist “Gray wolves” Glue the rear. The women / lesbians were more depressed and kicked on the ground. Then the attack are back in the car and drove away. Sufferers of injuries contributed, One was about. 5 Minutes unconscious. In recent days, verbal and / or physical attacks on gay / queer / left people accumulate.
..So go ahead only party?

Apart from the fact that this article comes from Indymedia, which I impute such an opinion about free coverage as any NPD Gazette – only the other way around I must go beat a little bridge for Kreuzberg.

I was not there, Therefore, I can say nothing of the action itself, but I live no 300 Meter was removed from SO36 and dressed himself not unduly. It is not generally dangerous to pull through Kreuzberg. Secure! Some places you should not visit daily and maybe a healthy dose of caution you should always – not only in Kreuzberg – have. But generally Kreuzberg is not quite dangerous. The SO36 is apparently a veteran of the gay culture in Berlin, Furniture Olfe or the Roses belong to the culture and directly under my company is a gay cafe. This includes the area, in which the Schwuz or the Gay Museum are to Kreuzberg.

In this respect. Warning and Caution! Always and everywhere in Berlin – No fear! Not in Kreuzberg.

Exciting but then also, that especially in Kreuzberg will also do something then. So yesterday there was a spontaneous demonstration against this incident and although the figures diverge there arg (Berliner Morgenpost says 150 Protesters, :Gloria Viagra: says in her MySpace Bullettin of 3000 People. But it is nice to see, that just then Kreuzberg is a neighborhood,d he does not tolerate something like this.

My 2 Cents on the subject 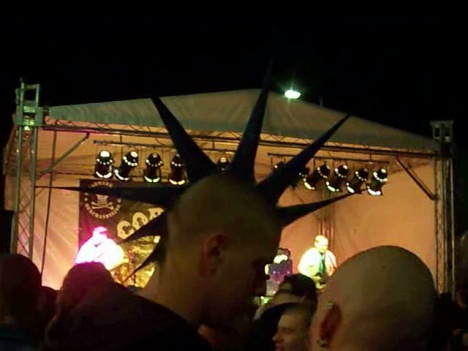 For me, only one stage was on the Myfest actually really important. Die Core Tex Bühne. Core Tex is a record store, the only punk, Sold Hardcore and related music. Similarly, then, the program was on stage Punk, Will, Rocksteady lastig. The stage was located right at the entrance of the Orange Street and marked the completion of a Myfestes.

Because of the music gathered in front of the stage just all people, the order could start something, Punk, Rockabillys, link Skins, normal Personen, a few goths, an illustrious mix so such a compilation can be found in Hamburg just in the hill or on St. Pauli. This was the largest collection of ornate mohawk hairstyles, I have since FC St. Pauli rescuers saw festival.

Speaking of this club. You could also imagine, you had to actually be somewhere in Hamburg. St. Pauli Patch, Sticker, Buttons, Shirts, Caps, Jerseys, Jackets. The whole Fanarsenal was there to see and Yes! I felt at home.

Now that's commonly the clientele, which is ascribed sometimes also left violence, but strictly speaking not particularly changed in front of stage much, as a backstage once ascended to pistols and police sirens wailed.

Knapp 50 Meters behind the stage began to 23:00 then that the playing field for the May Festival. There were stones thrown, Open glass containers and tend not made the calls to the police result.

The band plays, during 50 helmeted, armed and armored police hooligans to pursue a Myfest and nobody cares really. Somehow an equally bizarre situation, as Demo am Nachmittag. 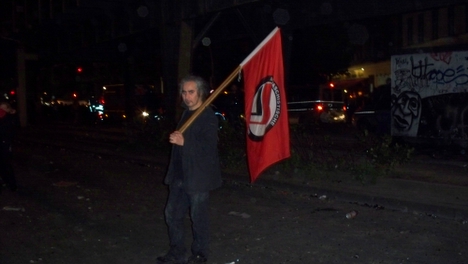 Well stones were thrown and then still behind the stage there was a lot of excitement. Press helmeted men sought Photos, Police moved in turtle formation advance, the whole battlefield was illuminated by huge police lights and a lot of onlookers watched the whole thing. …Somehow it had something very staged. 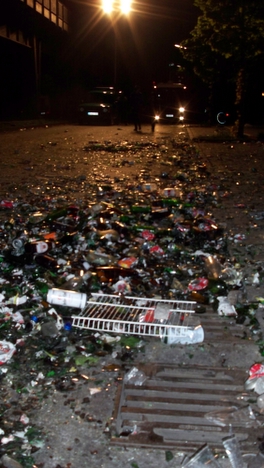 I did, however, rather then at the stage with the music and Strongbow Cider. A tasty stuff. From half past twelve were only DJ music and the stage was dismantled quickly…. Half past one, than two Grünbehelmte discontinued the event the stage was almost gone. Perhaps no record, but close to it. Then I went home.

Whether something has happened? I do not think, because 32 !!! Police car, that stood by the Oranienplatz around and count out my proof were, moved for a while not move. 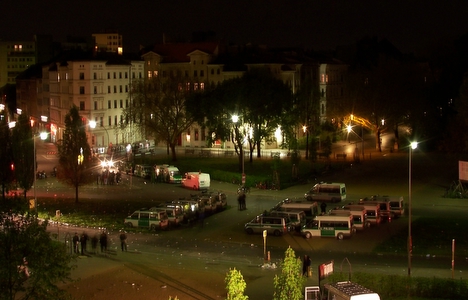 Who wakes me up there on the 1. More? 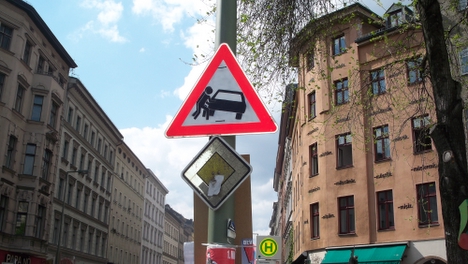 If you have a morning against 12 Clock (for me it's morning, if I order 6 'm home)… So if you order in the morning 12 Clock with the sounds of Germany must die is awakened by Slime, then surely something must be wrong…

In my case, it was the first demonstration 1. May Kreuzberg, who are selected for their anti-capitalist and anti-WHATEVER final rally the square in front of my apartment. I could not understand exactly, what they wanted, but it seemed not to be really relevant, because the fan base was rather limited and on about 2-3 Participants came a policeman ever again with neon yellow vest added, which also fits all “Anti” were adjusted.. Namely, as “Anti-Konflikt”-Team. 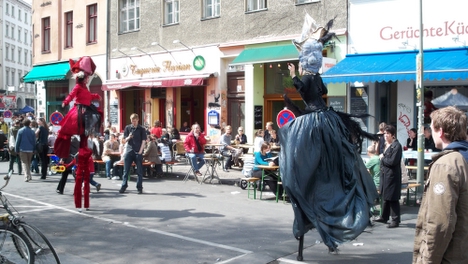 Now I like that everything actually. I've also Kreuzberg, not just selected me as a place. Good good, I work 300 Meters away, but I found the Orange Street right the first time, as I drove by class. Something between Schanzenviertel, Reeperbahn side street and Altona, pretty pretty multicultural and left. A road with the only St. Pauli Fanshop in Berlin, a road, where to homes ever anti-fascist flags or banners hanging and a road, where you can experience real time to Iroquois cuts infreier time of wild. As I said, politically and musically I feel at home here – if I'd just woken up not with demo sounds ;-)… 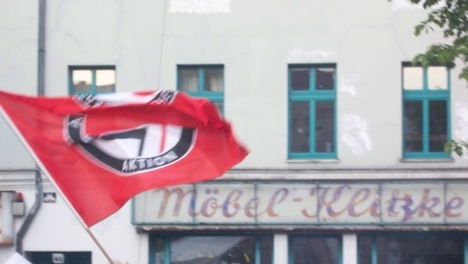 Well this is the 1. May and so it is probably on this day. And that day is quite Kreuzberg to the Orange Street and the Mariannenplatz a hard place. As 15 various stages of all genres, all of which have only one thing in common – one hardly knows a band… Well in Hamburg I would have known more under the same conditions, because the Berlin music scene is not as my 1.000.000 € discipline issues. At least I knew none of the bands. But one thing was clear, Commerce was written rather small here. Rapbands, Sound Systems, Will- and punk bands, Heavy Metal Bands, Folk sounds, DJ&#8217;s, and and and. A bit like the harbor birthday in Bernhardt Nocht Strasse – only with more stages.

Sowas to ich. Strays around and recognize music, learn and experience. While burned cars in Hamburg, Stones flew, Water cannon and use the right and left were, in Berlin were the one and only stones in this picture in motion 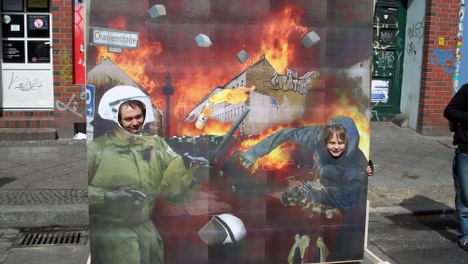 While police were on the move, but, really like a folk festival, just present but not particularly striking. That did not change, decreased as the registered main demonstration with thousands Mitmarschierern by Myfest.

A strange feeling. It is just not realizing before a music stage and suddenly the music stops and a demonstration with sound trucks, DKP, Antifascist-, Russia- and other driving pulls over totally quiet like a Tauermarsch… 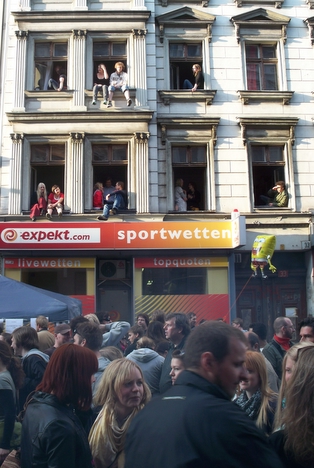 But somehow that does not really interest someone and the party went by and large, the whole unchanged. It waralso somehow a folk festival with demo character and good music, mostly stuck to the Core Tex stage, where there was the punk, Ska and the largest collection of Mohawk hairstyles since FC. Hamburg Dishes Festival.