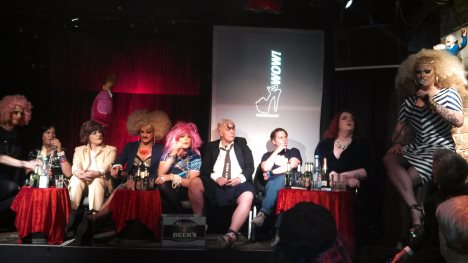 Actually, I almost never look at me the newsletter of Schwuz, but this time it seemed to be interesting. He promised a panel discussion

Superstructure in petticoats. The man in dress
If the fagot a dying phenomenon?
Panel Discussion: High-gloss vs.. Courtyard, Political vs.. Glamour, Mainstream vs.. Underground – If the dead fagot?

on the 20th anniversary of the death of Melitta Sundström, Pepsi Boston and Jürgen Baldiga should be thought of the fags, the Berlin have moved in the 80s politically. Moreover, it should be looked forward: What is and exposes the fagot today?

Should discuss Jurassica Parka, Toni transit and Moritz from the Kingz of Berlin, Charlet Crackhouse, Patsy l'Amour laLove, Gloria Viagra, Kaey, Barbie Breakout and Vera Titanic. Charlet was not there, instead Margot Schlönzke came on stage, would fit much better on this topic.

So everything was so, what the complex scene so will bear on stage. The typical drag queens, Queens, Shemales, Kaey with a transsexual, Drag kings and everything in between. It was so exciting – or at least interesting.

It is clear, that it alone in defining the terms transvestite, Tunte, Drag Queen with nine people probably 25 Are definitions and it showed pretty quickly. There were also some Einspieler of this Popkicker-guests, should explain these concepts times… Amazingly interesting and extremely different answers came out of there with.

I think, that these terms are anyway always pure self-definition. The transitions are flowing, but how to be perceived or known by other, it has one anyway no real interpretive

A Barbie Breakout does not see himself as a fag and would probably be referred to by virtually no one so. Sure she's a drag queen. Gloria Viagra however can be both a fagot, go through such as a drag queen, Margot a Schlönzke may be a fagot, a travesty warhorse 😉 , but if she wants, they may also at any time be a drag queen… And if you ask a Tatjana Taft, there anyway just in Berlin “Shemales”. So who cares, what exactly who is? And if it already in such a small “Community” are as many opinions, how is that an outsider can understand – and actually, it is also completely irrelevant. Everyone is, he just plays for themselves or want to be.

Einspieler a score of beautiful popkicker: “I'm not a tranny, I'm a normal person” 🙂

The general consensus was, that fagot always something political in itself has, which does not mean just, that a political man in general is a fag in drag, as you can see even with Barbie for some time.

This also quoted Ru Paul, which said something to the “when I open my with my long eyelashes, it is a political statement” … since it is also because no matter, whether one is straight or glamor tranny gives extra schangelig. Amazingly, in other words, also said that, for example, in a patriarchal Kaey for the world, it is such political, if a man wears women's clothes. I feel consensus.

Surely this is more of the lowest type of policy, yeah, but in my opinion this is absolutely correct. However, I would still point to accept a, the still captures the visibility into. Surely there is another act of, to put on a dress for example Schwuz or so still go out into the public…

It also said many in the closing words “it would have to be put on the road much more – whether out shopping or at Karstadt mouth or anywhere else… But when I think about, Who do outside the Mehringdamm, Gayparties, CSDs and CSD street party already “unbooked” 've seen, then there would be some at themselves take. Except Kaey, the yes now lives as a woman and Gloria, I've seen the ladies not particularly in public…

But it turned out again, that it is always difficult, to have as many guests as extroverted in a heap, the converse that is intrinsically- and independently. Since then needs it more than microphones are present and interfere with the presenters then really only the Schlagaustauchsch.. Although both Mr. moderators were pretty good.

The ladies were also agreed with the drinks – Too little and constantly all.
“Barbie You wanted to say something?”
“No, I wave only after alcohol”

That was probably the last time in the old Schwuz, so now the soon disappears towards Neukölln and Mehringdamm turn back. shame really. Will they then take the Melitta Sundström picture with them from the dance floor??