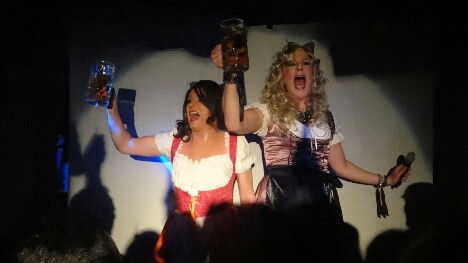 After the last (Birthday)-Mislead the House last month, the highest mass of trannies on stage, should this month rather the least amount possible on trannies on stage. Strictly speaking, all of two Nina Queer itself and Brigitte, both dressed in dirndls a Oktoberfestirrenbouse showed..

Oktoberfest is a mad house slowly as common as that for Christmas or every year on the anniversary. This also means, that we know about,what to expect on the show. Trannies in dirndls, Pretzel, Beer and what you can expect to folk music as a gay party berlin… Which is limited to about four songs and a flourish.

So then brought Nina and Brigitte Hellwig also daswas could be expected in about, Heidi, Servus, Gruezi, and Hello, The cuckoo song and again “semen is disgusting”…. For each new great, for regular visitors like me Janka and frankly a little boring, since all the numbers already seen so, heard and taken.

But as always throws out the YouTube videos,one can also add some more times…. also has (if I'm right errinnere Mataina ah how sweet the last time) not thrown around the cuckoo song with mushrooms. Fortunately, however, are neither hard nor wet – different than things, otherwise the fly from the stage of madness as House… So two trannies make less mess on stage as four or five…. Although I'm sure Margot and Maria umm Nina and Brigitte could punish me lie without problems… is, after all, the Mad House, gell.

To which I got pretty much the rest of the show…. I barely reached the bottom, began, the theme song of the Muppet Show and Nina entered the stage. 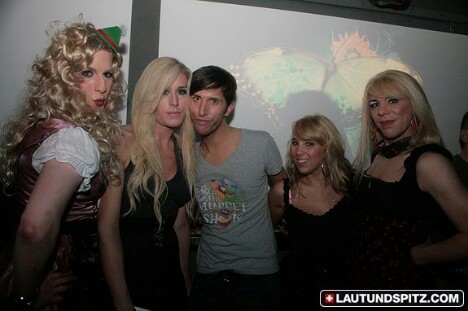 I was surprised but then later, as an SPD politician also boarded the stage for a 5 Liter keg to stand in order to impress the guests and attendees to vote. Hmmmm. He promised, one 20 Liter drum, it should actually be the mayor of the district… he is to become actually.. wenn ja, then at least not by my voice, namely that went to the political competition… 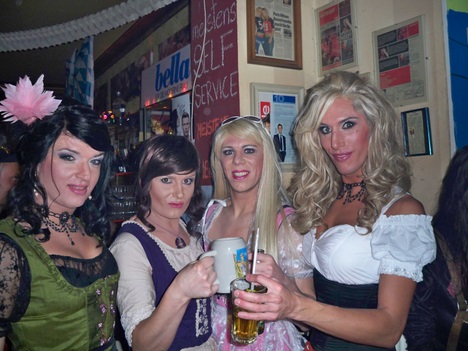 The fastest ways it was almost the Middle of Oktoberfest the Sage Club, where this evening the Rockstar Models Party should. Fast insofern, as I made a beeline home and my car eintauschte against my bike and the few hundred meters to the Sage put back in dirndl beeen Mountain. But fits. 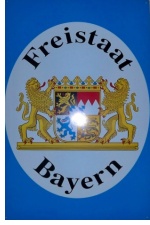 Arrived at Sage we found, however,, that it was A B S O L U T impossible, come in the Sage, there were certainly 1000 Persons outside the door and wanted to purely, there was blood and thunder and the alley, normally kept free as us for guest list visitors, was close to that evening. There is no possibility, come in and we gave it after a short time.

I left my bike stand and went into Sheila's mini – my bike is still there by the way, but more on that later. The idea was, to go to Bangaluu, but got there it looked somewhat similar to the door of. Full, full busiest on. As we had no desire.

So we sat in the car and were already on the verge, to go home, I my Mobile anschmiss and so in the diary of Victory Column found out, that :Nina Queer: this evening in their Bar for dirty hobby made an Oktoberfest Party. Sie Oktoberfest, we in the Dirndl… Wow, suitable as planned. So go there. 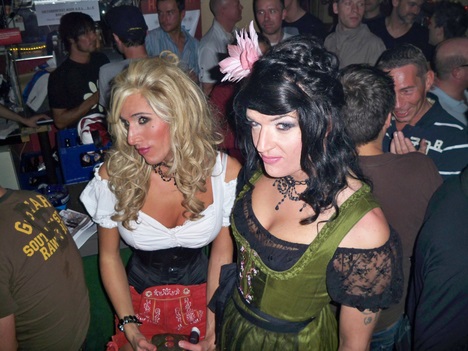 It fit perfectly and you have to say, Nina was blown away, to see you there and even dressed as one of the exceptions actually Bavarian on this event. Wen I say “Blown away”, I mean it, and probably the best highlights your repeated statement “Drink! Much Drink! On my account”…Nina gave to us compliments and tons of drinks. Thanks for that. 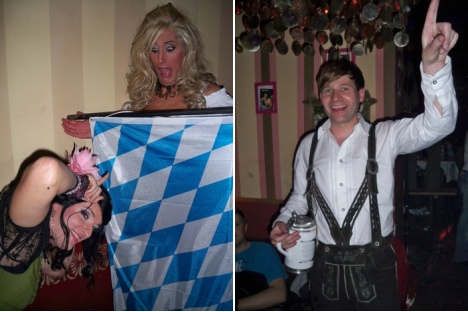 While other visitors had to pay, However, this seemed to make too bulky, because in contrast to the middle Oktoberfest, where there was dancing on the benches, danced in the dirty hobby on the tables – and the rather extreme. So extrem, that some tables could not stand the eternal rocking and people simply collapsed under the load.

Nundenn! Loss is everywhere and no one was even injured. 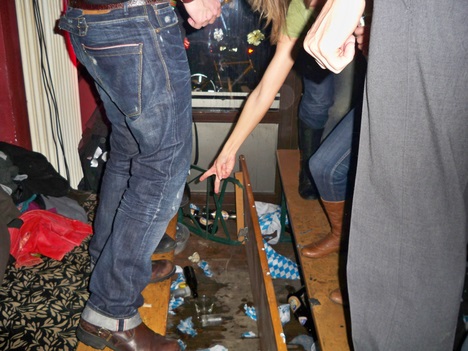 We were not injured but before that should change and yet we are still hopelessly drunk, we said goodbye to Nina and drove to Bassy to again just in Chantals House of Shame look past.

Oktoberfest or Wiesn in Berlin 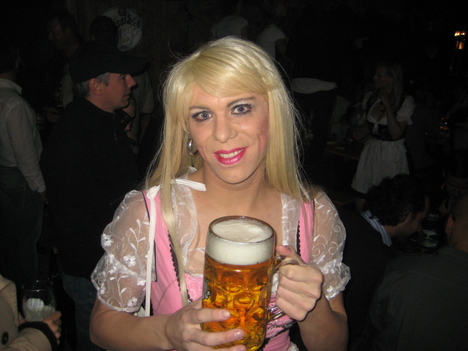 As I wrote the other day there are also some attempts in Berlin, to transfer the Oktoberfest feeling in the capital. A boring tent at Alexanderplatz for example, hardly the ideal place to meet. Different and much much more rustic Oktoberfest is the center near the central station.

There is no atmosphere but a tent-1a Holzhüttn feeling. But from the front. I had suggested to Middle of Oktoberfest to go and my weekend companion has agreed to delay for something, come along. Super.

To 20 Clock I was supposed to be with Janka, but this was delayed a little, I stood in front of the door and walked in not, because the lock cylinder was replaced and it took a while, until I had made it clear to the caretaker, I need a key to not freeze to death outside. 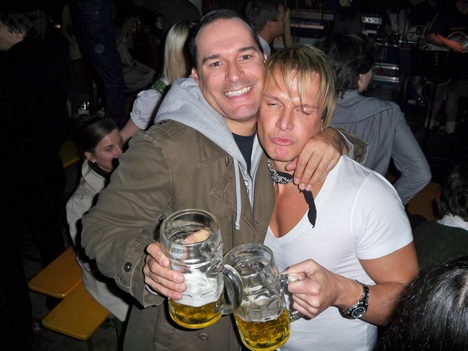 Gegegn 21:00 I was then ready, just had my Red Dirndl attract…. RRrrrrrritsch. Zipper broken! Ochmensch! Nundenn, the lady of the world has indeed two dirndls and so it was called: Makeup runter, Make-up and put on my other Dirndl. Instead 20 So I started clock 2 1/4 Hours later the Berlin Oktoberfest.

First impression: very quaint. Rather than a tent, a wooden hut, a treat booth, a high striker and many people had thrown opening came in costume and meet me already with beer mugs. And! Here I am right. “You bring me something to drink!” 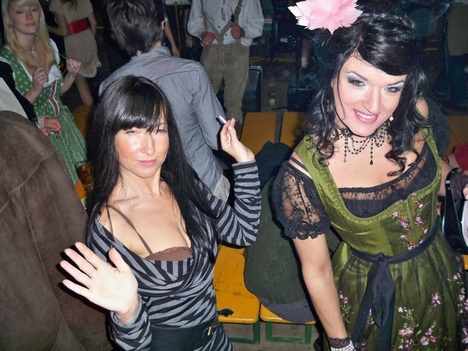 Now I'm not exactly known as Biertrinkerin. I do not like this swill simply, However, I was important, to have a glass of beer in hand, so to speak for photography. (Only then it is athens table). My now found accompaniments saw the similar, but like they stole with my beer mug around itself and position it well and set the scene. 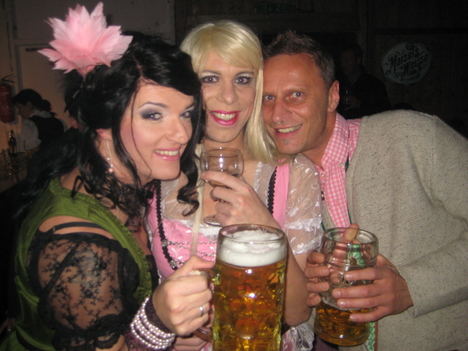 Also, Sheila if you see here with a beer in hand. Do you believe nothing. This is all made. Actually, they ran around there with a white wine spritzer… tsts. It has, however, pressed into my hand just before this picture.

Now I'm not a beer drinker, depending not only, but not a beer connoisseur. So I got a beer mug of the weasel Nimble operations and tried a first sip in the solid certainty, that it would not taste me. But strangely enough, I liked it. I tried a second time and a third time. Hmmm really good. A Beer, I like, how does something like this? 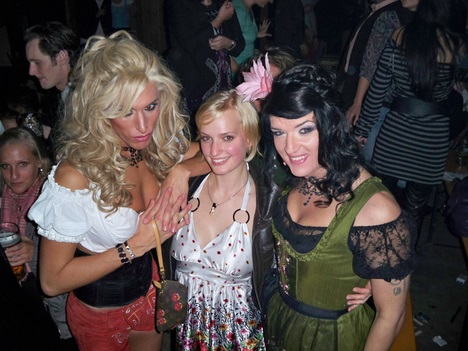 I even asked an operator for the beer brand to me as they “I like beer brand” zu brands…. It was easy 10 Minutes until I was aware of, that the operation has brought me no beer but a cyclist. So much for Zoe and beer… That was wrong, but saved my evening.

Now, it was announced an original Bavarian beer tent band – I can not check, But I would say, who Bavarian spoken and fired up the audience properly.

Presumably, it is easy potentiated in Bavaria, but you could speak in a laboratory experiment ever get a glimpse, as the munich Oktoberfest can be as well. In any case, it kept many people – also do not – on the benches. Well, not sitting on the benches I mean of course. how to sing even in the football stadium on the standing room? “Sitting is Sucks Balls” … So risen and mitgefeiert on the bench. Unfortunately, it attracted Sheila and Janka wood floor instead of in front of wooden benches under the heels to have and so I had to always look Mitfeierwütige. The what but not really difficult.

And there were masses of people there, you knew, even if I did not know most naturally. For example, I saw two girls sitting in front of the tent and studied still wating for my camera. “Girls looks beautiful Bavarian times” 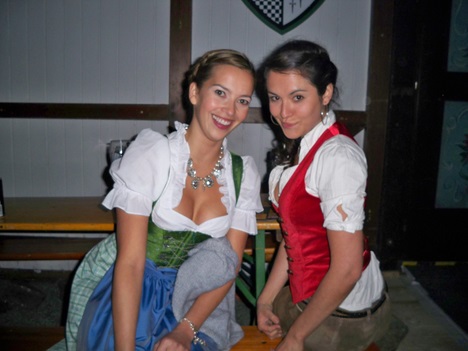 Only when viewing the photos Sunday I then recognized, I had just photographed Laura Osswald of Love in Berlin. Somehow she got me the same familiar. Only later I saw, that Sheila and Janka before I came – Laura also been taken in their midst have. War ja klar.

But otherwise there was still a lot of prominent families and half prominence around and good friends, you always looks like MIC again, for example,, actually Wolte also celebrate, but was not really in the mood. Slightly revised, the good. 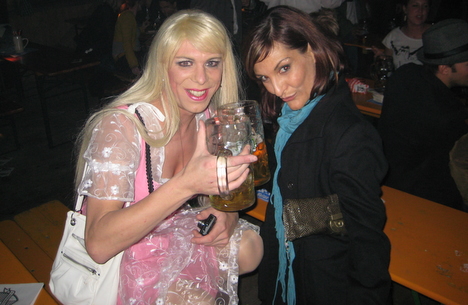 I had a lot of fun! But at some point everyone has fun once finished, My cyclists had been drunk and thrown my jacket, Just to go so's not really my thing, when there is a high striker in front Oktoberfets Tent. Have you ever seen a tranny, the Hau den Lukas tries? Better not look.

I had a lot of fun and the question of whether a measure cyclists can still be driving times I answer now free to Günter Beckstein with “And”. The center Oktoberfest should definitely visit again. 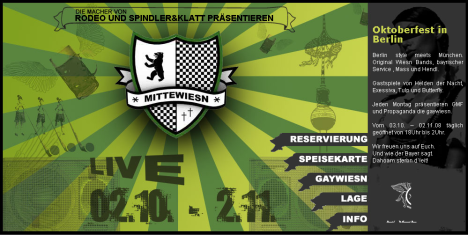 Today, point- 12 the Munich Oktberfest was indeed inaugurated the tapping of the first keg with beer. Well in Berlin is something between Carnival and state of emergency. Oktoberfest eben.

Even though I've never quite understood, why the Octoberdetermined to a large extent in September takes place has probably deter anyone can really drinking beer.

Actually we wanted to go to Oktoberfest this year, and I was still an extra- Buy Dirndl.

Unfortunately, however, has not quite worked out and it seemed, as is the birthday recently been the greatest feeling to our Dirndl in Berlin zum Oktoberfest 2008 to carry. If not then just in Munich at least a little in Berlin.

Now it seems but, as would be an option still arise, for there is in Berlin also has a small Oktoberfest, the middle of Oktoberfest…. The website speaks of “Oktoberfest in Berlin: Berlin style meets München. Original Wiesn Bands, Bavarian Service , Mass and chicken.” …sounds good. The whole is of 2.10. – 02.11. each of 18:00 to 2:00 Baerisch experience. 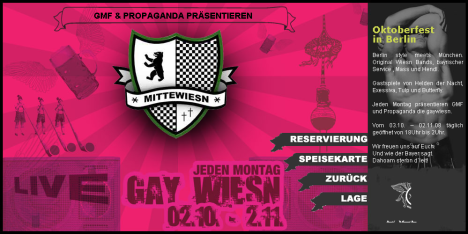 And for the people, which non-gays are not so entirely at ease, there is also the right offer. Just as there is on the right in a day Oktoberfest Wiesn the Pink, there are in the gay Berlin allmontaglich Oktoberfest. Whether it is to the other six days of the week there are significant differences, I can not say, but this is presented by the GMF and Propaganda… And at least Bob Young white yes definitely, how to celebrate an event zünftig.

The big opening is on

03.10. and I find, it is a basic, times to throw himself into the purchased dirndl or lederhosen… Book by the way seems to make sense…