Today is a sad day, because a great woman is now in the blessed age of 85 Died years. I am not talking about anyone, but from the mother of all Pinups, Bettie Page.

Bettie Page has managed the, what else actually reach only movie or music stars, the die at an early age. She is an icon, an idol and everyone has exactly the same in memory, as they worked in their best days dei world.

It was in the 50s for their Pinup, Bondage- known and fetish pictures and is considered one of the most photographed women of the 50s. But they withdrew in 1952 completely from the public at his own request and had already appeared at the time on more magazine covers than later Marilyn Monroe and Cindy Crawford combined. Yet her photographs continued to live…

A final interview was Bettie Page in 1996, However, without showing her face. The imprint of current images she refused with the message, she wanted, so that the people they kept in memory, as it had been.

You inspierierte various people and scenes. The style, but especially the hairstyle has been copied many times. So you could see clear allusions to Bettie Page, for example, in earlier images of Dita Von Teese, and it is probably no coincidence, Dita today that has really blonde hair instead of her jet-black hair. These can be found on every fetish at least one person, everything is because, the Bettie Page Lookalike Contest zu gewinnen.

As I read yesterday in an email exchange:

I was a few years ago on a punk & Rock'n Roll Festival in Las Vegas…. Since I am aware for the first time really become, had the influence of Bettie Page. The world owes a lot to her. (At least the world, I like.)

Clearly, so there are two stores in Hamburg, for example, different types with various audiences, the King Calavera and the 20 Flight Rock and a two Bettie Page perched above the shop. Wo sich Pinups, Rockabillys, Stop emos or punks times, where fetish is, playing bondage or burlsekes life is somewhere you often find a picture of Bettie Page.

Without it maybe would not have de world, sure, however, many of the scenes and people would develops differently since the 50s – and as it is today, I think it's good. Not for nothing is one of the four buttons on my leather jacket next to a FC St.Pauli Button, Bad Religion a button and a Dita Von Teese button for a long time, a Bettie Page button.

Well Bettie Page with 85 Died years, but the world has not forgotten them since the 50s and it will not be forgotten in the future. Her style has will continue to inspire people.

If there is a life after death, it was a beautiful desired.

Immodesty Blaize do not want to be photographed, Richard O'Brien already 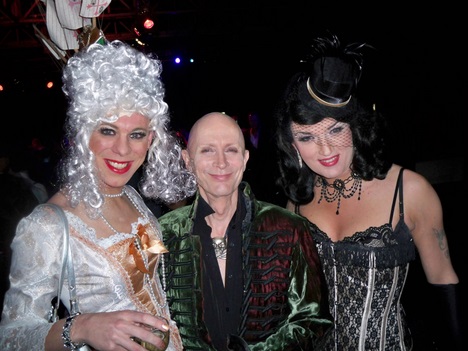 After the great musicals of the Rocky Horrors show it went straigt forward to the after show party.

..at least almost directly, firstonce because we needed to know, where this party takes place at all, and since then we had to make a stop in front of the Rocky Horror memory wall, where again some photographers clustered around us that I could even persuade a, to take a picture of us with my camera… Not so easy. 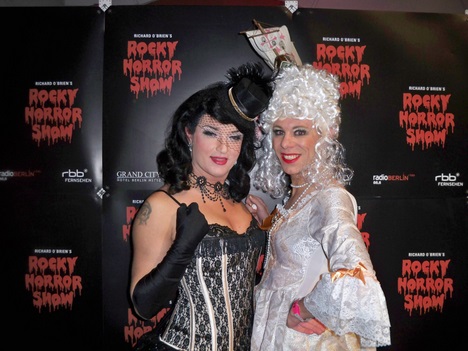 Unless it was actually done on the after-show party, which was well filled in the rest of. Somehow everyone was here VIP – well almost at least, because when I waited up for a while Sheila were at least a couple people without Lanyard. However, we were let in and we should wait for food and drinks.

Actually, my plan was to get drunk, But somehow I did not get. Just a glass of champagne, that was enough for me Eve Champagne, I drank, and also with the food it was not so. AS a were the sometimes very creepy creations, all with Halloween and “Red” had to do, on the other hand I actually had to struggle a lot more with me and my ship on the head. It is there really limited with such a Caravelle on the wig…. Nevertheless: am sure no one overlooked… Even a non-ex-colleague, but that was because I obviously did not recognize… 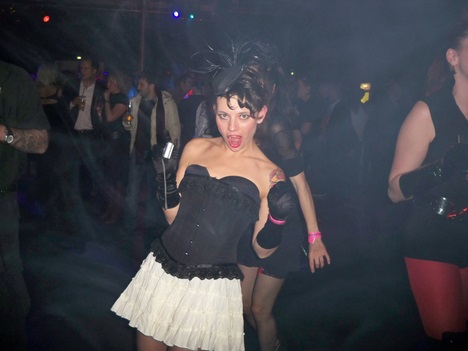 Nach einigem Warten zeigte sich danna uch die Rocky Horror Show Crew nochÃ‚Â einmal mit einem schon ziemlcih breiten Martin Semmelrogge, who had been drinking some champagne more, I at this moment. The crew was applauded like, aber be noted, that was actually waiting for something else. Strictly speaking to someone else and that on Immodesty Blaize.

Immodesty Blaize? You do not know? She is THE British burlesque dancer and Miss Exotic World 2007. They noticed it and dancers at the Pinups gathered, that they could not really expect it. Otherwise, more intent on style here were the top places their seats and the inclined photographers might like to line up behind. 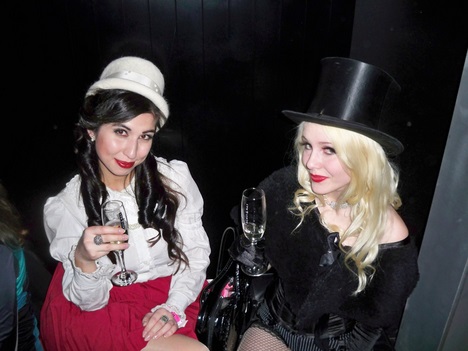 Who could do anything anyway, because it was made clear, Immodesty Blaize that does not want, to be photographed or filmed. …. I need I do not understand. I mean, such a star is the lady now not even in this little country, that a little more attention would do her no good. Actually, we should here a Gray image with the inscription

“Immodesty Blaize” does not wish to increase their fame in Germany, therefore, no image of her.

Still, I'm not doing it… Really stupid of me. 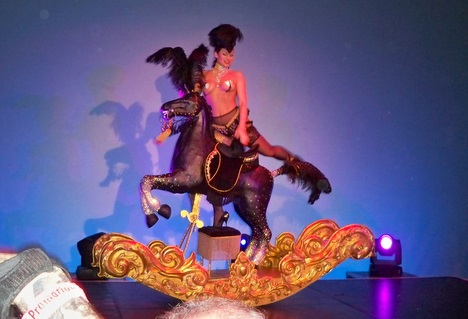 But this prohibition, however, has not deterred the paparazzi, anyway to keep the cameras on them. Since it also has the bitch, the legally employed always “No Photos” has bitched. As I said, who does not want, has already.

But the appearance. I think, Immodesty Blaize is already a League, in the play a few. Not for nothing is it known as the Queen of British Burlesque. Now I know of no other burlesque dancers of the kingdom, but I think so, that it can not get much more. Dita Von Teese itself still, whereinsaid two already on the type, the Aussehehen and on the performance are quite similar.

Where Dita gets into a martini glass, lolls Immodesty Blaize in a tub and in this case on a large rocking horse… That this very clever and pretty great. Man cane also sagen, Show troubling classes, only this “No Photos” might not need to be.

No matter, we said goodbye, then towards Adagio, where this evening should start the Halloween Masquerade by Bob Young… 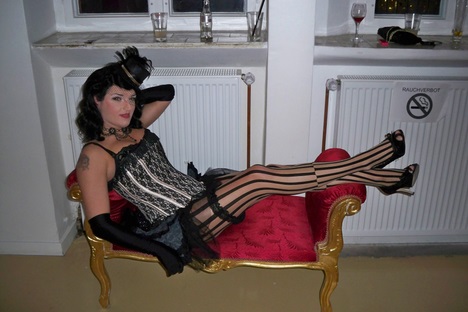 But before we even sold a couple of the very matching sofas for a couple pictures and could “it” even persuaded to take pictures. 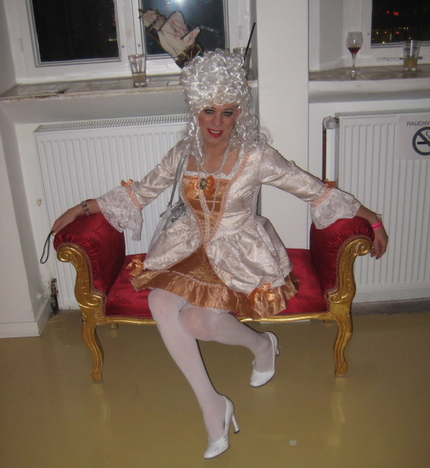 The Titty Twister Bar – Nudity and much more liquor

When I look at my stats, I see now massively Searches, something with the Martin Cutter have to do and its newly opened bar Titty Twister. Something must have been going there today and it seems to me, as there is now a television product run.

Corsets, Nylons and Pin-up: The Return of Glamour

Everywhere is indeed currently the subject Pinups and Burlesque theme, so also again today at Spiegel Online. Besides Zoe Scarlett and Dita von Teese there under the title Corsets, Nylons and Pin-up: The return of glamor and a small section, in the Queen Calavera was shot.

Chance or good fortune, I was on this day especially in the Queen Calavera and looking at the whole number of Miss Julietta course with me again full-length looks.

The Spiegel Film apparent to one hier. Check it out.

Choosing the Best Hot Rod Pinup Show at the Decadence 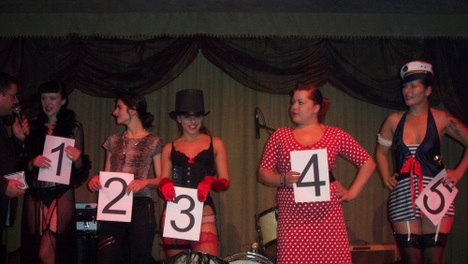 The weekend was indeed the 3rd rockin’ Hot Rod Decadence in Roadrunners Paradise, the next great cars, exciting bands and frills with a pinup contest attracted, of the Sammy was organized by the Teaserettes.

Five young ladies with more or less experience as Pinups on stage vying for the favor of the jam-packed Roadrunners Paradise. So far I've noticed, but at least two had recently made a pinup course where they could learn burlesques dancing and now would push the limits learned this art equal to a large audience.

Under sirens so they defoliated to their pinstripe suit, threw the gun to the side and even still lost some of their prey. When she finally stood in the negligee on stage one asked already, which they would then cop arrested.

Second, we had to Nelly LaRouche a bird of paradise on the stage. Although, there was no such sophisticated story, However, a well thought out choreography.. Says one actually with only one person? Now, as it may, the bird of paradise defoliated skillfully, not without keeping the tail feathers….And a bit more close, than all the world – do you mean – the audience at Roadrunners Paradise awaits an end to the number. has. I think with the 20's music in the background, the roughly, what is expected on a pinup contest.

Somewhat surprising, however, the audience responded with the next number of Miss Red. “Firestarter” The Prodigy is certainly not the first music, which one can think of a Pinup Contest. The beats have thereby also the sound of my digital camera completely overrides me. But the topic of digital camera is a very unique, to the next few days more. Let's stay with this performance.

Smart way, to face up to the stripping on a chair, so the last row sees everything. For me – and so much had already been betrayed now – clearly the winner of this Contestes.

I heard, the opinion, that they would have had a Siegesschace, if she had defoliated this. …But if she has not.

So we come to the last start number, to Honey Steel a bona fide !?! Matreuse. At least so said the moderator. Since I have my doubts, because nowadays one uses because all other Binoculars – as well as other weird before it came to me. Now the ladies, however, has received the most applause advance. Whether they could redeem it? Well look for yourself.

I hope, yet to learn, Who had actually won, but I'm not too bad, clearly to define my voting. Was authorized to vote with the entire audience with small note, the loose despite only five performances 16 Offered opportunities to Vote. They were to be deposited in the shapely and beautifully designed hot rod Abstimmungsbox. 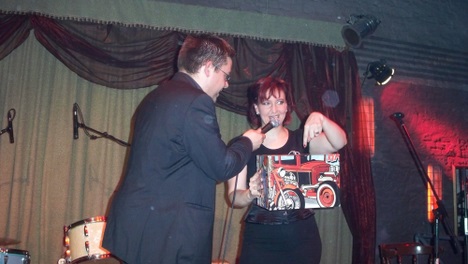 Unfortunately, such a voting list also means, that you need to write something. However, not everyone has something like this. I resorted to it then just a lipstick, which made clear, which three people were my favorites

1) Prodigy was the best number ( Miss Red )
2) amzweitbesten I found the bird of paradise ( Nelly LaRouche )
3) third is the Matreuse become my. ( Honey Steel )

But knowing me, I'm definitely return next hopelessly.