Gloria would be proud of me, for I will push me tomorrow once political. 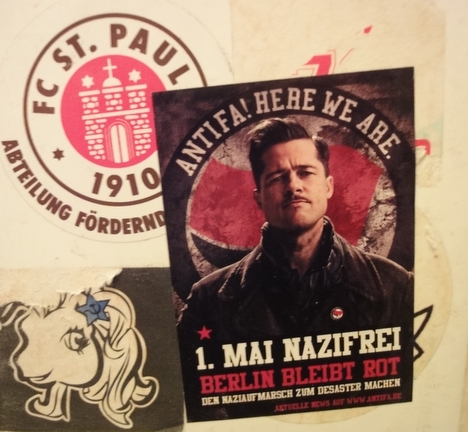 Not often, but now and then I will be in my blog once political. The attentive reader will base my political attitude not have escaped. If I were just a football fan, I could also be a fan of the HSV, but I like the FC St. Pauli, I would just like fast loud music I could listen to metal or hardcore, but i like punk and when I moved to Berlin Kreuzberg was not just because of the way to work my preferred area.

It is the district in Berlin, where 81% choose the left of center, where the Greens' vote before the link-saving part of the turn before the SPD, dort wo Hans Christian Ströbele 8 times as many votes, as the right candidate of the CDU and the Greens where 36,5 x obtain as many votes, as the NPD. It's my neighborhood in Berlin. There is a neighborhood, where right pack has nothing to Search. And look, it has nothing at all in Berlin. Even not in a 1. More, which is celebrated tomorrow.

At this, the NPD has called for a demonstration in Prenzlauer Berg and want it to remain, that are sufficiently counter-demonstrations, To prevent this. I'll be there, who else is coming. Report to me.

Should take you to: 9 Clock Alexanderplatz
Use should be: http://twitter.com/1mai_nazifrei
You should know for safety: 030 6922222 (committee determination)