I live now been several years in Berlin and was just last weekend as “Heterosexuellste Trance, I know” referred. I do not really have, if that was now seen as positive or negative, but my passion for football as a whole has related content to it. 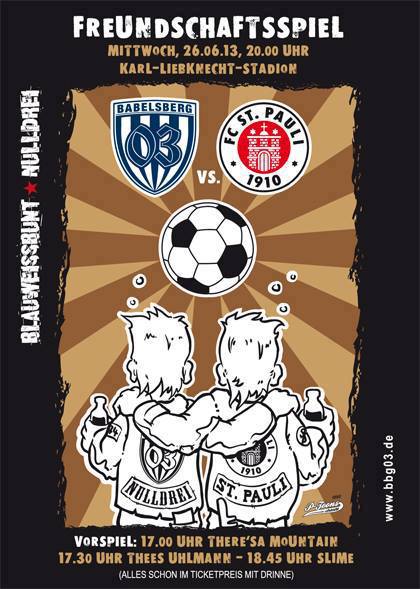 In these years Berlin has a passion for Football not changed much – if anything it has become even greater. And the team was also clear. St. Pauli forever. There was simply no team in Berlin, that would have interested me. Hertha? Can only love someone, who is from Berlin, Union? I was not really convinced, I saw her in the stadium and just tried, out, as in the simultaneous play of St. Pauli stand.

And it is this came out yesterday for a test match (fast) to Berlin – Strictly speaking, according to Potsdam Babelsberg. And not only the team should come, they should still bring Thees Uhlmann and the old warriors of Slime. More than enough reasons, to go there – Reborn, Melanie wanted to go there, the works in Potsdam. We always wanted to have long times to meet for a drink. 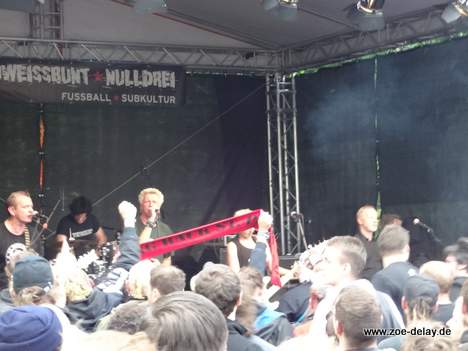 I actually had no idea, who, Babelsberg who was so ist, also of the Fanfreundschaft to St. Pauli I had no idea. Now I know more. The audience is left set, this comes from the Potsdamer squatter scene of the early 90s ago, it is anti-racist, Set anti-sexist and Antihomophob, The stadium is named after Karl Liebknecht, Stickers to law everywhere. Judas, for example, Hansa Rostock… (Okay, and probably an intra-Union apparently Berlin theme). You feel like a little St.Pauli – and that feels good.

It also saw many other so-, Many people on this evening wore scarves or pins of both clubs and the word Fanfreundschaft seems no empty phrase. Such same history welded together. What showed up at the game very well. 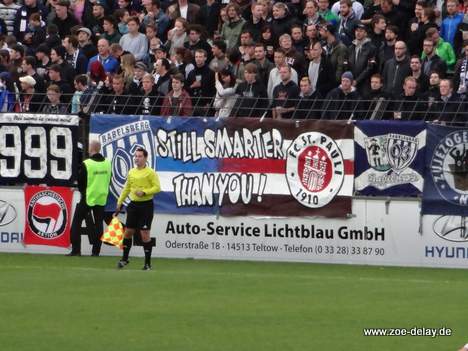 Two announcer this evening, a St. Pauli, one of Babelsberg, at the respective gates Torlied was played and the fans sang the song ticks or the duet Aux Armes

Two clubs with the same songs, the same mood, political orientation and similar historical events. I finally found a club in Berlin, I can sympathize with the. I believe, I will visit Babelsberg now from time to time – pursue closer in any case. Auch wenn nicht gerade Slime da spielen 🙂 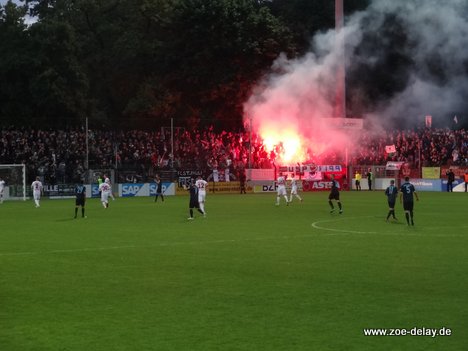 But it was so great. Nevertheless, the game was not announced as large, was at least half the upper corner tree (OBE) at Karl Liebknecht stadium at Babelsberg 03 against FC St. To look Pauli.

From the game but I have not noticed any sooo much, because Melanie and I actually us 90 Minutes consistently entertained and only partially stayed for the match. But the real game was on this day almost incidental. At least not really important. 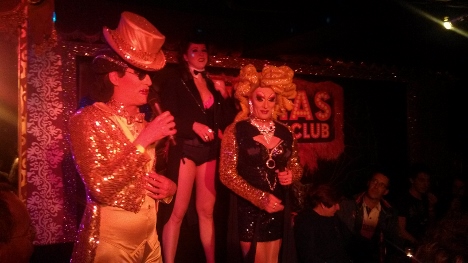 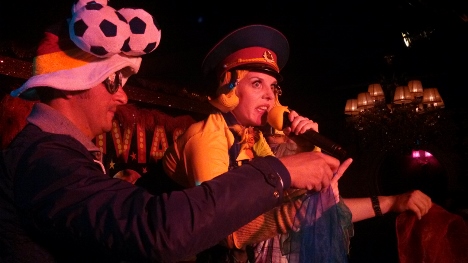 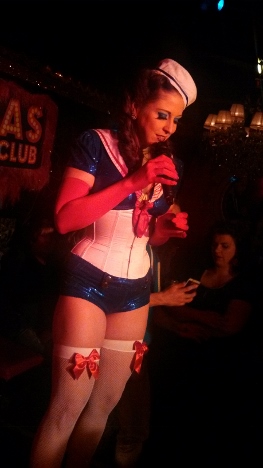 Barbie Stupit und Lee Jackson sind als “Double Faces” die Drag Hosts im Showclub. I see them though since about 8 Years on each CSD in Hamburg, but on stage I have actually never seen the two. until just today. What can you say… professionally, the two just. Nothing else I've expected. 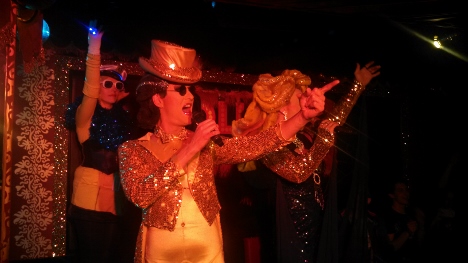 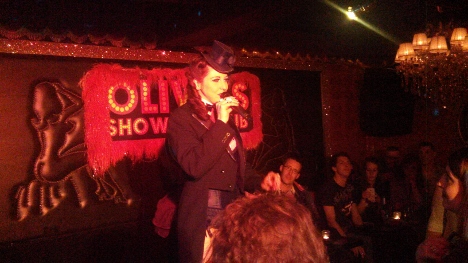 Somehow I ended up then – really completely random – backstage… At least in the short term. As long as you would also must not leave me, sonst hätte ich vermutlich in Barbie und Lees Kostümen gewildert 😉 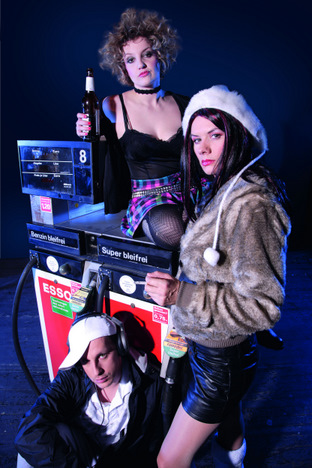 Photos: Oliver Fantitsch
Thank you to the St. Pauli Theater

yes they are known from radio and television. The best known and most profitable gas station with safety also in Germany. The ESSO “Kieztanke” on the Reeperbahn. Thousands if not many more stories are told about this gas station. Alone I have a whole lot of stories, acting at this all-around-the-clock supermarket and neighborhood hangout.

Whether it's the purchase of red wine and candles for a party or night GAY bad way to my very first Trannyparty, the past led me to the neighborhood gas station. Material for thousands of possible ideas or theater for a musical. 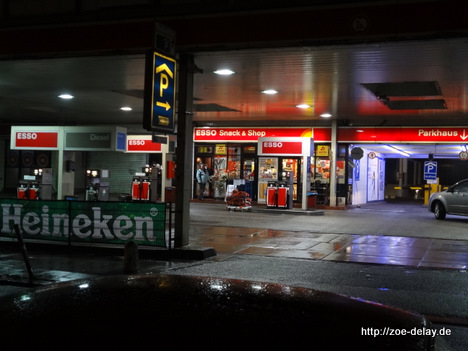 Thus, the St. Pauli Theater thought, and taken the night gas station a few years ago into the program. The idea is good: several completely different Charaktäre spend Christmas Eve for various reasons more or less together at the neighborhood gas station

The young punk, der junge Hip Hopper, who has no desire for his family pretty square, the slightly older man intellectual, the not so well gets along with his wife and drowned his sorrows in red wine style in the glass, the only surviving sailor and the sprightly pensioner, which is Ausgebüxt from the retirement home… To several times the people just come… 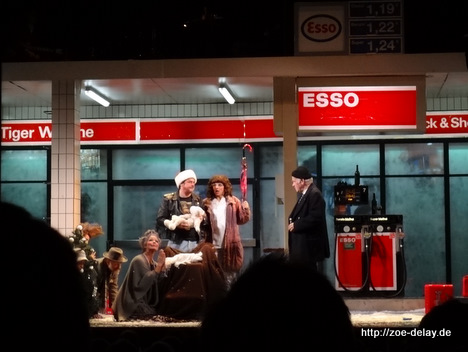 Anything with a little melancholy, and all singing, because it is in the night service station to a musical. A successful yet to… and a highly acclaimed:

Hamburg Evening Gazette:
“Hamburg's best musical plays in the neighborhood. The new evening of songs by Franz Wittenbrink was at its premiere in St.. Pauli Theater celebrated with great joy and absolutely deserved bravos.”

…Ehrlich? I'm not sure, what other musicals, the Hamburger Abendblatt seen as, but I really have seen in recent years a lot of musicals in which large cheers and bravos were earned. The night petrol station was unfortunately not one of them. (Not only) I was, that little was made of the thousands of possible stories. In fact, the whole musical was actually no real action, no text and no hamburg or neighborhood-specific stories, who just do not even anywhere else could have happened. In addition many of the songs sung were good but not everyone would have to be really. 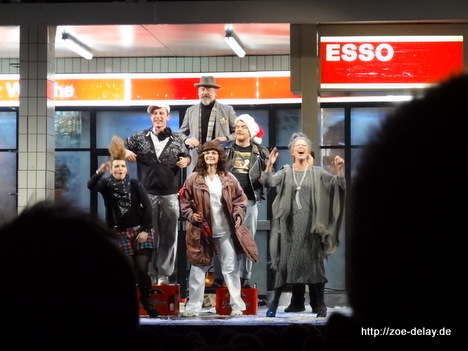 The Premier League season is now finished and St. Pauli is cut off and thus relegated. It bothers me especially, I have to get up early again the next year, to see the games. Otherwise? Now I'm just back Zweitigafan. And und? The descent is good at, it is in the next 10 Years, eventually ascending again possible. And then can celebrate again…

However, not next year, offensichtich now because the team falls apart pretty firstonce. And when many go, have come new….

It has now been revealed in the last season, that St. Paul needs above all a head strong defender, drum is searched in the forum with allerleih effort for a, the ability to fulfill this. Then an idea came to, the need to consider. 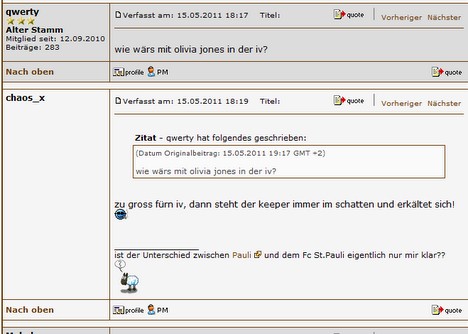 Olivia Jones in central defense? Hmm I'm not sure, whether Olivia is fast enough, moreover, they should be booked differently on too many weekends. After all, she'd St. Fit Pauli. And she has already shown, that they can keep striker with their size in check. Although the striker now no longer plays so since one or the other year.