All mushy in the bulb?

I had heard at some point of the water battle in berlin. However, completely forgotten, it's something that'll give.

Until such time, morning when I was called a coward and low card in my company today, because I was Kreuzberg, and – like every single time – who had lost large vegetables and water battle… 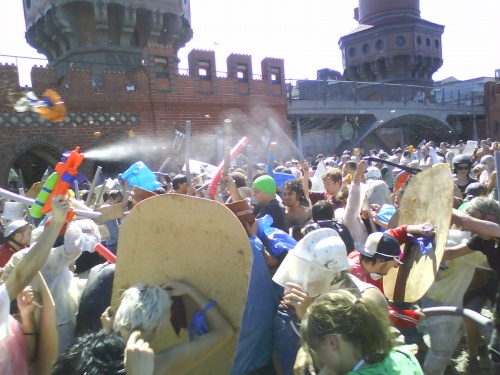 No matter. It should be thrown with all, what is soft, mushy, stinks or is otherwise disgusting. Eggs, rotten tomatoes, Kings, Flour, Water and and and and. A large muddy, nasty affair, which is obviously always won of Friedrichshain… Incomprehensible!

I think, Next year I have to be there and lead times since the Kreuzberg to victory. ! Jawohll.

Last weekend I had a visit from Hamburg. Annika und Jens kamen, because they were invited to a surprise party to Berlin. A friend of them rounded and was carted from Bielefeld to Berlin – and all kinds of friends just came back from the Federal territory.

But before we started we had to eat something. Annika suggested currywurst before and since I came to the Curry 36 Mehringdamm, the most famous curry stall in Berlin – if not Germany. Something must be tuned so, At this booth, because if you order in the morning 2 on the way in Schwuz an Curry 36 comes along, it is just as full, like driving again at half past six.. 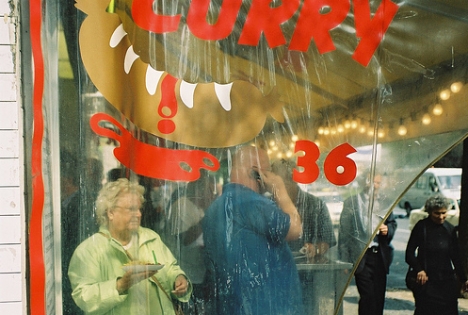 Currywurst with chips three times without bowel, to a Becks, a gold and a Becks Becks Green Lemon.

Okay, it was a sausage, but how it also gets into thousands more booths. The whole has confirmed me in, I always suspect. Curry 36 is probably the most gehypteste fast food thing in all of Berlin… You ought to know the Henhouse an der Strasse Skarlitzer.

No matter, We were strengthened, The evening could begin. I gave my beer into Jen's loyal hands, because with beer and driving is not really my thing and we drove back to me to go by subway to center.

The Kim in the fountain street in central Berlin was the target, But to find this target was not so easy, wisely because the owners of the Kim have forgotten, Never miss a signature to their name. So only one who knows, that this store is called Kim, of him a) has found and in addition b) the store can also assign the name.

We could not and most of the country Kim in a bona fide Punkerkneipe. I felt like the Uncle Otto ago 10 Years as the Harbour Street was still the old… Well there we were wrong un found, Kim was just that but the other shop.

The Kim is a gray-white room with a breakfast bar and a mixer with associated plant. The whole thing about the flair of a basement party, as it was formerly celebrated on birthdays. With two differences. The room was full and the drinks had to be paid.

The many guests present were a good mood across the board, the cheap drinks and dance to the music to very good – but was wondering something. The partial skeins types there.

I mean, I am a transvestite and know many strange types, but it is apparently in, To wear mustaches and Wool Sweater Vest, wants but not in my head. At first we thought, the need to have a mission. The members of the band are determined, have played today. 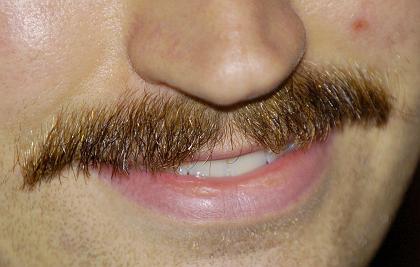 Far from! We were informed, that the serious. Also, you let it melt on your tongue. There are people in Berlin, the wearing woolen tank top and mustaches VOLUNTARILY without having been forced to.

In the short term I still wondered whether now that looks especially cool or very stupid, but after pondering the shortest I've decided for myself, that there can be no reason, to wear a mustache, unless you say Thomas Magnum and travels to Hawaii with a Ferrari through the area. Then – but only – Mustache is a good. 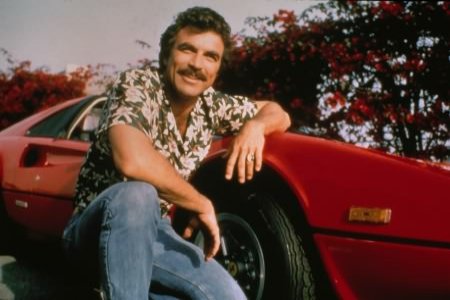 But the boys did not look, as if they had been a Ferrari but only as if they were regular Spanking in school. That was not at all.

One of the beard said to me, I was so new in Berlin and he may give me another two months, I would also have a Mustache…. Forget it boy, I'm in a different subculture at home and my face is much, but certainly not a Mustache.

On the horrors I needed some Cuba Libre and Vodka Redbull phone to endure the. And somehow, was the last probably bad. In any case, I had the next day no desire for alcohol…

Before Kinzo Club, we were bored, euphoric after.

We had to find the entrance some time, almost landed just in a bad pub, called us to a closer and said Tursteher, that we would probably want him to. In the Kinzo Club. He was right.

This is called probably Trash – and I like trash. The Kinzo is a small dark, abgeranzter store and I know some people, would just go in there, order to go immediately back again (and, I admit, I know these people). In Hamburg, perhaps most closely associated with the Hafenklang. It is immediately, when you come in here:

Here is a subculture at home must be.

Agreed!, invited for this evening :Gloria Viagra: and Barbie Breakout at the after party Ouch. What can you say, it was great and not crowded, such as :Nina Queer:s Irrenhouse Parties. This made her even more enjoyable and funny somehow.

While we listened to the show by Gloria Viagra and Barbie Breakout and the two with me “Riot and Remmidemmi” translated by Deichkind me the catchy tune for the next few days ear, Sheila saw a guy in, there also hung out the Kitty coke, we had met at last weekend in an asylum House.

Witty – I maintained a gene-time with him / her and found, that they also originally comes from Hamburg and after will indeed happen like mine shortly, has relocated to Berlin.

The trannies gather themselves together in Berlin. 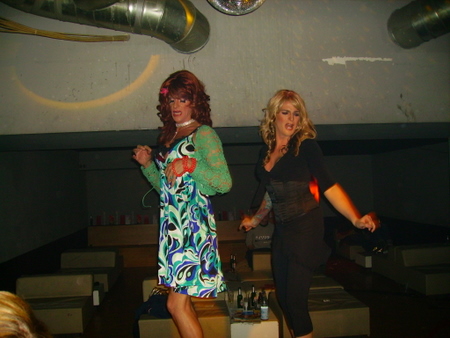 Otherwise, it was called dance, dance, dance, entertained with some Leutschen and smile for Chrissi Berlin4Fun of some nice times in the camera ( Sheila btw did you get the photos? ). 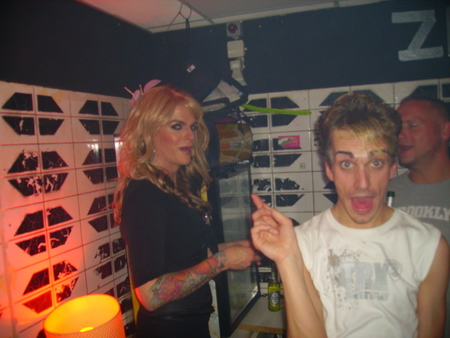 As yet complained to me Kitty the suffering of not gredressten tranny? There were people at the party, they would still be buried in the asylum House, and now would not even register it. The way it is and you have to know it. Auch die besten Bekannten erkennen einen auf einmal nicht mehr 😉 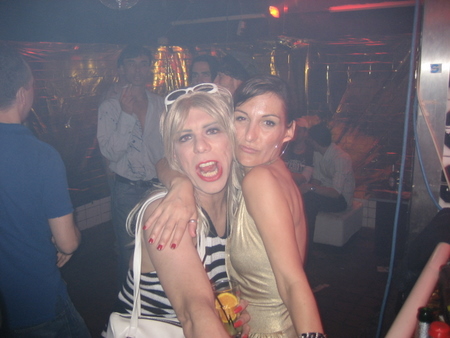 whoever was the girl, she was sweet – and they could celebrate. 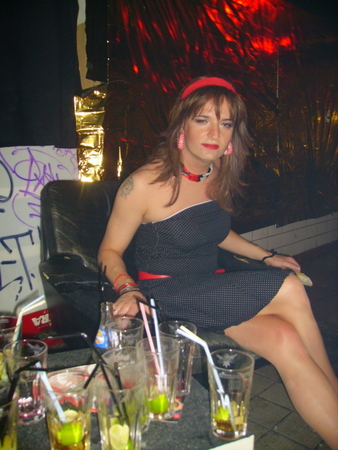 Sheila from some of our cocktails

By the way, there must be still a minus point for this shop. Cocktails were not their strong. Caipis, Many, or White Russians were not at all, Instead, there was the really worst Mai Tai, I ever drank. Somehow there were missing the sugar syrup and almond syrup (it tasted at least) and he was very angry.

We were for the most part do not care, because sour is funny, and this evening was funny at all events :). 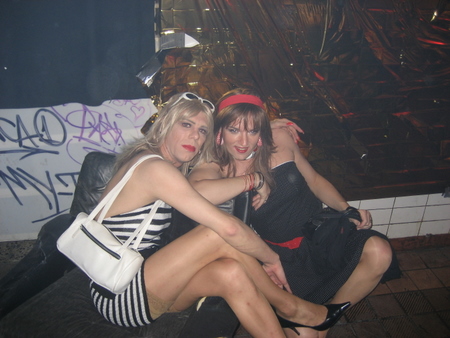 [youtube]dVqZwbUwIaE[/youtube]
Trash as Trash can !

Eventually it gets boring everywhere, it was us in the Un-Schlagbar tedious, because I still could find little to the overall theme and also we wanted to further.

Firstly, Claudia was + 1 put on the guest list of the recently opened new Foo Club on Hamburger Berg and finally waited Unisex Gold Party for our appearance.

Well now I'm curious, what happens, when heading out with you…

claudia said, and did not want me right gleuben, that little would happen to nothing… Okay okay, we both wore no glasses, what the number of detected eyes can shrink to a minimum, but it just happened really little.

Sometime around 23 Clock we searched and found the Foo Club to determine, that this first order 0:00 opens the newly renovated doors. To fewer jobs in Hamburg, you can spend an hour better than on the Hamburg Mountain. We moved into our first subculture therefore an object of study, die barbarabar.

The Barbarabar is one of the typical music venues on the Hamburg Mountain and is oddly next to the Foo Club. It is populated, Like most shops in this street, primarily by students or persons, the students were at least times.

Tuesdays through audio cassettes of the three question marks, on the bar TVs run, or Heidi Barbapapa, Wednesdays and one Thursday foosball swing. All in all, a urfreundlicher shop. Even to us, Claudia had to admit the, that you really did not give us too much attention.

However, I would be a little less observance of the types have liked, who asked me, if I had to sell cocaine. (somehow amplifies the feeling as my drags are all drug dealers). No matter, that Claudia had something to marvel at, I dragged it to the other side into the second stress subculture object of study, Villa Sundries.

From the villa Sundries there is fortunately no photo, and when, then it could be of an average fast food hardly differ. A Boring Store, the non-deuschsprachiger popular meeting transsexuals, arguing that there, klönend clamoring and waiting for sex and free and hope.

Then sitting at the bar, the crowd of losers, just hope that it, to afford the, but are unwilling or skillfully, or would not even rangelassen then. I was nowhere figured the whole evening in any case in such detail or observed, as here. …What does the tranny heir and why is it a woman here?.. The villa Sundries is actually one of the shops, where woman should visit the men's room, because this is uniquely clean.

We had definitely made quickly and moved now in the Foo club was generally pleasant.

The club was called Foo already Crazy Cat and doubtless had been x-other name. Eventually, I was once the Combine family in the store and it was really funny. now he was new to Foo aufgamcht and club wear than the masses. Unfortunately, the masses were not. We were on the guest list purely free and talked about one and a half hours with a DJ on God, the world, Music, Subcultures, Mods and Northern Soul.

As a sometime around 2 It was clear, that there are no other visitors would now join us, we went to the Golden Cut to Unisex Party, to see times, whether there would be time to grace the door for me.