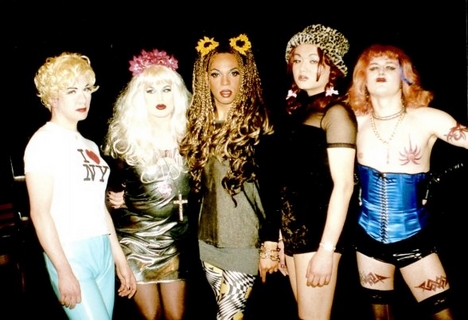 Have I not yesterday, I wrote about She-Dick again looked a little better drag strip, and found, I know for a long time and no longer exists any longer. The Six Inch Killaz were five Drags from London and although Luis Hatred, Mona Compleine, Holly Cock, Jasmine Salomeund Miss K.

The five ladies from the UK boarded by Jaht 1994 to 1999 various stages in the UK and played dirty, punkigen Trash’N’Roll genau das, So what I like. For this purpose they even played their own songs, which indeed is already something special.

Starting point for the Six Inch Killaz was a visit by Luis Hatred in Way Out Club to form and the idea for a newcomer inspitierte an evening of Sid Vicious and Dee Dee Ramone Rock Band TV. Buying a bass and a question for Mona Compleine, after all, the guitar played later it was clear, that there would be this band… They found also in the Way Out Club their charismatic and wonderful to looking singer Holly Cock. Although they said could not sing, the answer “so long as the line-up looks good, it dosen&#8217;t matter what we sound like, right? but took the fear. There were still Jasmine Salome and Miss K. added and the tranny band was complete and the performance could be tackled

When I started blogging, latter was – Miss K. – one of my idols from the blog area, There were at that time in the UK but an agile Trannyblog Scene, which is however quite come to a stop, Miss K. itself today is less likely to blogger and much more guardian of the heritage of Six Inch Killaz. Damage, that since they already 11 Years are no longer, I would have liked to seen once, I must myself with Gloria Viagra, Sherry Vine Squeezebox content. It really is not the worst. 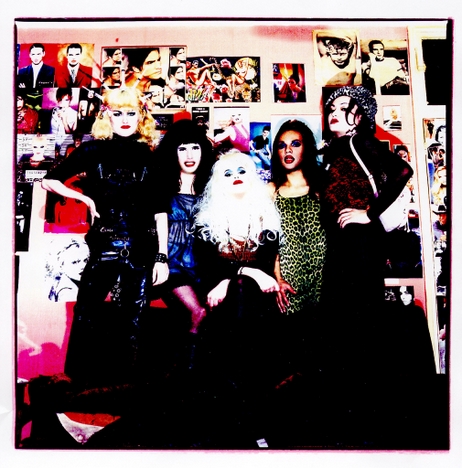 When I see the pictures and videos, it reminds me of Gender X, the Film, I absolutely have to see me again.

I still have one or the other Trannyspot in stock, I have not yet posted. Today I therefore see this Visa Spot.

There are a few videos MasterCard, I have already shown, but this is the first Visa Spot.

It is about a crossdresser, But somehow, the spot will be different than you expect but probably would.

The Dream Woman in Red

As long as I still have, I can show you some nice Trannyvideos.

Today it is a really sweet little film of the Oslo transport companies. A party is over when the young protagonist of this film his dream woman sees her and follows up on the bus. Okay okay, this blog implies, of course,, that this is not a real woman and of course it is just as.

But that does not matter, because the film is made class, romantic, really nice – only the chest hair – there never would be the.

Currently, I live not too much and I spend my free time especially with a depleted sleeping or sew on a red Pailettenborten as red corset.

Fortunately, I have for some days with Aglaia Contact, who has written a thesis on Trannywerbespots and there is more than one would expect – and more than I knew previously.

Today's small film is a drag queen, which is obviously booked for various occasions such as birthdays. As it is, however, got to this festivity, I can not quite explain. Maybe wrong at the door or in the date. However, is hard, that they did not really sensitive perceptions, to tell her, exactly what it is for an event, she hangs out on the…. and what kind of a wooden box…