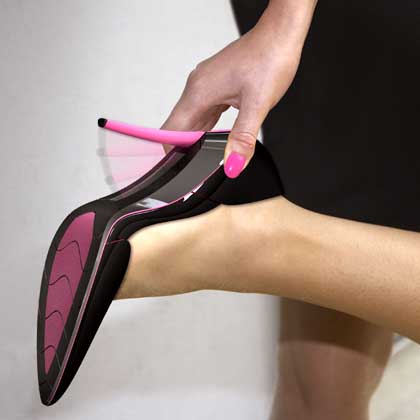 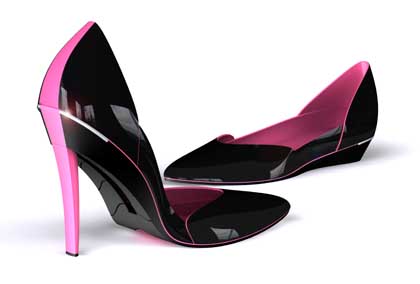 Now a company has created a prototype of a retractable high heels – and I must say, I like it. At last you can enjoy long shopping spree, schedule all CSD parades or dancing for hours, without having to justify himself to his feet. Simply fold and you are from the Heels Low Heels. Class. They are really chic and the design of the color also kinda cool.

I'm back from Ibiza and happy.

I've actually presented, to go to Ibiza, much to lie in the sun, to exercise a lot and to enjoy myself in various discos. It then came to be a little different. No completely different.

The first two days I've held me back a little, Ibiza Old Town and visited a little standing in the City moment during the siesta before most diverse closed doors of fashion shops. Wednesday night I wanted then Carmen del Mar in San Antonio bzw. Visit Port des Torrent.

So I'm moving to Ibiza, I rented a Vespa me, because it drove all around, So I also.

Gedresst and about half 12 to about 18 Made kilometers. Approximately in the middle between Ibiza Town and San Antionio is built on the highway. In Germany no problem. There, the traffic is far turned down several hundred meters from each steep curve or the whole site and clearly displayed. not so in Ibiza… No speed limit and curve arrows in Black (Great at night)….

Since I was not as fast as cars drove, I drove quite right… I saw the curve, wanted to slow down a bit. An error, because the far right the road was very dirty. ROLL SPLIT. The Vespa slipped to the side and below the barrier by, I slid to the other side and with the entire body continues.

Mini, Sandals, kurze Arme… and gravel. Completely in shock, I stood next to a Vespa, continue running the. Even some people from the Civil Guard came. I then lost consciousness and was still beside the road. 5-6 Policeman next to me and not one spoke English. Because let German. (I thought that everyone in Ibiza wide would lack ..) Since they could not communicate with me was made clear to me at gunpoint, I did not move me… I've then also prefer not.

Eventually came the ambulance and I was rushed to the hospital. The Vespa was meanwhile at the scene. Although I had the key but could not, of course, the Vespa properly secure – and not also see, if anyone did.

Even in the hospital, almost no one spoke English. There I was also clear firstonce, where I was hurt anywhere.

The chin, both hands, both elbows, both thighs, both knees, the left leg and the left foot were covered with large deep lacerations or abrasions – and in turn, were peppered with lots of loose gravel.

Much pain to clean and bandage my wounds act, a further loss of the X-ray reflection and general confusion, what about me, I was allowed to go at some point in the night,.

Trance, smeared make-up, no wig, an 11 Sets verbandagiert, with some orange nails, several fractured nails, the kids and bloodied jacket, with white stiletto sandals I hunpelte from hospital. It must have looked very freaky, but I was heartily at the moment no matter.

Cabdriver, please the accident. The Vespa was gone, of course, and I served very.

Instead of sun or beach I was looking forward, to stay in bed and do not move me.
Ergo. Closed holidays as fun, pain everywhere, überall verbandagiert, Vespa gestolen, high deductible. Replace high bills for taxi ride to the scene of the accident, and daily trips to the bandages. Holidays, which were not a holiday, and all very, very expensive. That was my Ibiza“Holiday”

And, I had infinite happiness, nothing is broken, my neck is okay, I was not rolled over in the night, I was not around but hours they called the ambulance oh yes – and I was not shot.

Cologne is hell and the city planners have one of the swatter. Like Sarah said, still? The Nazis then rebuilt on the old /, how they have presented an Old Town… Well the good German woman has to be located in front of the pot or have children and do not pull on high heels through the old cologne. An Men, do just this, was probably even less to think as.

How do you even asked me? “Do you really keep on these shoes? In the old town is cobbled….”
“Oh, has this been”
That was a false error…

Some cobbles, OKAY, But Cologne's old town is a single cobblestone. There are, I believe, in der ganzen Kölner Altstadt keinen ebenen Stein 🙂

Okay, I took each joint, 'm often bagged, ran on tiptoe, parts as on eggshells and was often fall just before. It was horrible

These shoes were Saturday still unused. After a few hours old town of Cologne they now look as. 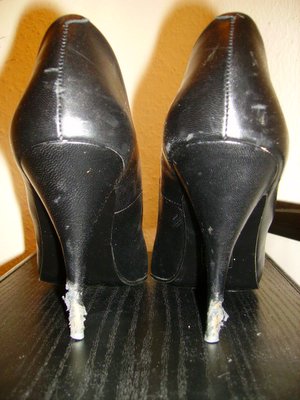