If trannies get into the hair that goes from mostly without loss of face. And something's got to really not be, or?

So I can such formats as (someone's) next (something) yes not get anything. Germany got the dog, Klum, a young model, Piles the next musician to Stoking Rach and the new Super Chef… Bla Bla Bla. What is not wanted everything, to make a little odd. Drum was looking straight Leipzig Germany's Next Tranny.

Okay Kinners, wolln times and we talk about it without animosity… So Leipzig ! …not just Berlin or Cologne or Hamburg Not even looking because a Germany-wide top tranny. This has in mind something arty skills of a “Miss Germany” Choice in a Großraumdisse in Oberhausen-east with average regional beauties, the a windy night club owner has responded in just this Großraumdisse.

I like that are totally wrong and I have honestly no idea, what it really was, I have no idea, who has been through it, but apparently at least one of the participants came from Bavaria because of Leipzig and a part of the jury of Berlin. So on the whole and regionally as Gloria Viagra has been evident in the jury, I guess times, that someone has won, which was at least better, as someone who has lost there.

At least lost some of the girls at the end of a little more than just the event. One lost his composure, another's hair. Both at the same time this same – ie a “remove” and the hairs were gone. I assume, that there also mastic would not really helped. Ein großer Eklat, It has even managed to Sat1 and of course this blog… Wig withdrawing trannies should generally ostracized and tarred be genagellackt and feathered.

So be it, the whole thing has ensured, that anyone outside of Leipzig has noticed from this event and if it was probably a marketing element. Since then the arty-farty in mind no matter. One of the two hens fight was probably Miss Vivienne gold, their youtube channel I would have probably never found and the enthät a few nice things, like on youtube unfortunately deleted Duet with Daphne dragee and down the song “I&#8217;ve Never Been To Me” My absolute favorite song from Pricilla

At first listen, I narrowed eyes and ears together and thought “Heaven, how can this great song musically rape”, but when repeated Hinhöre ego maybe find love so bad.

Monrose, there are still?

The half-life of casting superstars and casting tape is indeed roughly the, the milk needs to become sour, but obviously there is the one or the other specimens, Join the change of the seasons once or even several times… Obviously belong to Monrose.

Which are now already in its fourth year and there is still a record company, where the production of a plate financed with the hope, that awareness of Monrose still sufficient to take more money despite crisis disk download, as output. Who would have thought. I do not.

Nungut, I'm not their target audience and have never had much respect for casted pop starlet and yet I'm writing about their latest single. And why? Na clear, It has drag-respect.

I could make it easy and tell me now, that the use of drags in the video has sales generic and sensational character, Monrode but are neither the first nor – and even not – the most famous musicians, have the Drags in video. I know this really well not really, what the Drags in the video are actually quite. Maybe I also understand not just the story of the video. On the other hand, it is perhaps only the title “Like A Lady”

The video is actually rather arbitrary, but whom I've noticed it right, are the white tops, the girls wear designed by Joey Love. Probably the most exciting about this video… Well at least it has in a few days already 102.000 Brought people to, watch the video. They seem still to have all kinds of fans.

There are even voices, Suggest Monrose for the Euro Vision Song Contest.. Since then, however, they would probably join the superstars Gracia and No Angels, the average were last… Let's see, how it proposes to Lena. 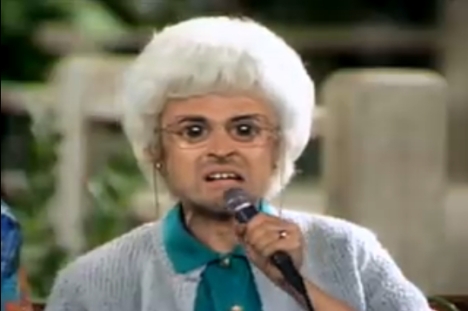 We all grew up with the Golden Girls… Okay, the very young hoppers are not many light, but all the other OAPs should troupe Blanche, Rose, Know Dorothy and especially Esther… and who will not at least a little like, should review its approach to life once again strongly.

I can remember in any case still, the Golden Girls in the night program at times, where I would have to sleep long ago to have seen. It was always nice and funny, although far from “Now please laugh” Shows today's bugging removed. Somehow still a perfect world, these Golden Girls. 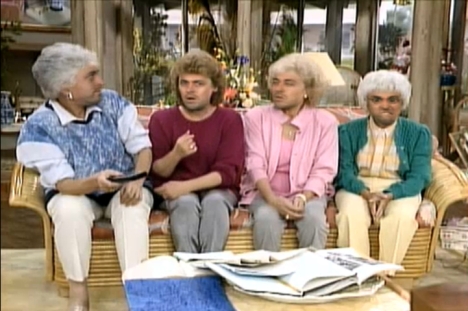 The band Pisol Youth like the Golden Girls probably, they have this in the song “In my Eyes” worshiped. The soundtrack is all with clips from the series, where something is different…. if only I knew what…

The ladies have to suddenly beard shadow. And I mean no ladies beards…. Witty.

There are a lot of songs in the history of music, have something to do with it, that men throw themselves into Fummel. A song which is definitely “Dude looks like a lady” by Aerosmith. Whether because of Steven Tyler wrote some autobiographical, and I do not think. But also is fairly regardless.

Besides the songs are there but also songs, that have nothing to do with it, that men throw in drag and do just mentioned occur in the video anyway. Sometimes more and sometimes less well.

Now I have unearthed a video, where it comes together, okay, it does not necessarily seem to be an official Aerosmith video, but still a pretty great and Steven is also definitely not there before.

Instead, four Drags, who take too seriously with this video… Instead, they show the hard times of the drag everyday. Intolerance, Drags and Drugs, Loving grief and competition. Reasonable, I find.