before I bored my readers with my very own annual Year in Review, I musds strongly again at the following annual review point. 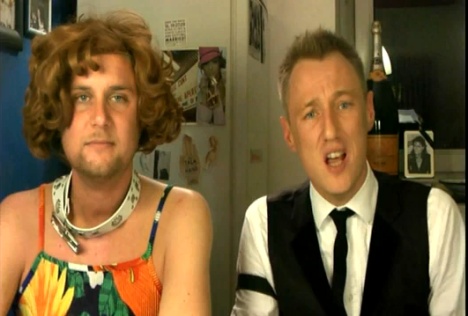 Michael Jackson ist tot…. Which as such is certainly not news, but was taken by these men and women an opportunity, to produce a great look back at the last year.

When I think, how long I sometimes need for a single blog post, I would imagine not at all, how long have used this, to bring all this information in rhyme on a song and this then also to sing and record video standard.

Aura Dione – I Will Love You Monday

In today's times, where for a long time MTV actually no music or music clips shows it can actually happen, that a number 1 Song has never seen the accompanying video, I was able to find just, I saw the video of the song I Will Love You Monday Aura Dione.

The woman has a gift, I would also like to. But I do not mean the ability to sing or write songs, but the fact, that their equal Heels follow the Pied Piper of Hamelin at every turn. They come from everywhere angestöckelt.

One can only hope, that she also has the gift, to call only heels in their size, because otherwise such a bunch of high heels only causes suffering and grief 🙂 Nice video, nice song and many a high heel fetishist will sit drooling at the screen.

Really the scene was like me but never noticed, occurs in the upper macho Kurt Russell dressed, to go to the police out of the way. A great picture, as a tough chick, and he as their “Property” wegschnippsen cigarette butts. I like the movie and the scene…

Okay okay, I know, that is very old hat, but also old hats must be stored somewhere. And I keep this scene on: Here it is now to find:

The largest of the German tv's Schowi, the sexist man of German dresst focusing screen as a woman and tries on the television show Yes We Can Dance in What a feeling. Ingo Appelt tanzt Flashdance (Although completely talent-free) but still worth seeing, with silicone breasts, says the tight body and extremely weggeklemmten eggs as he.

To look at something and fremdschämen. Jennifer Beals has done something that better – and had the crisper body.