Halloween is come for some time in Germany in fashion. Even if it seems really mainly to be a great marketing campaign of costume manufacturers, who still need a second income in addition to Carnival, This custom is also becoming increasingly popular in Germany.

Generally, that means yes, To scare people, but does not really do them some. The better drives of terror in the limbs, better – just not more than. Has happened to me, however gestrenein horror with creepy effects:

Yesterday at half past 12 I went through two directors and the company put an unannounced meeting for all 22 Employees or for immediately. In this meeting they laid represents, as they expect, that the economic crisis would turn down the company, such as online advertising revenues would develop and what would probably be their measure to.

Pretty much every third employee of the company has to take his hat – talk has been canceled at the end of November last. Leave it blank is the Sales, the technology and of course the two directors. The rest saw the “Social selection” roughly as follows: expensive employee: goes, favorable employee: remains. I was one of the more expensive.

The termination clause is a, that a settlement of half a month's salary is paid, if you do not like the Labour Court. Pooh. When they are okay das ist, Employment lawyers certainly know better than I, but the clause sounds kinda weird in my ears.

The fact is, this half-month's salary somehow brings a little more, if the corresponding job is gone….

However, what also makes me quite concerned is the date of termination. Does it just me against, or was with the transmission 31.10. half 12 somehow waited until the last minute? Now I have exactly 30 Daytime, mir einenÃ‚Â neuen Job zu suchen. I would say so: 10 Days before and I had 40 Had daytime. One-third more. Now t-30 (now only 29)

Theoretically, I should have quit my apartment just yesterday, for now on 01.11. means that, another month to three months, incurred anyway, until I get rid of this apartment – if need be – and in my apartment in Hamburg, I still, I live close to half of the rent…It would have been really nice, when you might not conclusively such considerations in a few hours, but with one day spacing could consider… then fall into the next 4 Months at least 2.400 € in the Miete, whether or city in which I work. I could puke.

Also, who knows a company, that a good online marketing, or Search Engine Marketing Manager searches, or who knows good labor lawyers, loves himself once please contact me.

Oh: I ask the life, me to refrain from such Halloween horrors in the future.

But not to my desire… 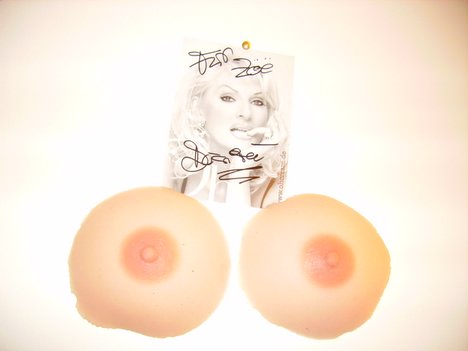 Other people expect from a Shemale Trans cliché apartment and we add us.
Specifically speaking, I'm joined.

What do you do, if they announce two trannies, consisting of a male , rather purist furnished ,Single dwelling want to conjure up a plausible and the average German passable Trans apartment?

Exactly, it depends on a “address unknown” Sign on the door and behaves enables quiet. 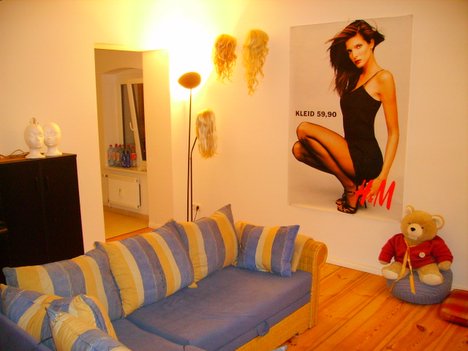 Bei Sheila “You” Wittler and Janka “Enie” van de Meyklockjes has this trick but not worked, when the two were now armed with some bags in front of my door asking to be let. I let them in and that was a mistake.

I really do not stereotype Trans apartment so at least my living room were pimped by the two. 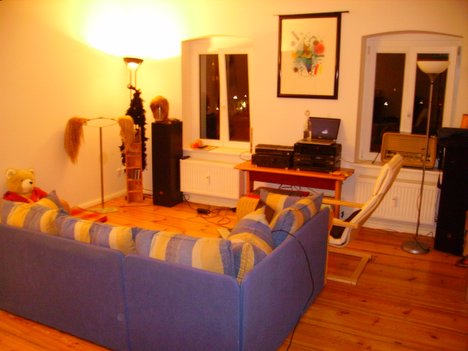 My window sill now houses a weissglitzerndes Bambi on petals. My one Torchiere with Barbies, hung with my other bags and a black shawl, Stole my candle wearing a pink and a head with a diadem rotgefederten. On my jukebox is a spaghetti jar with cowboy hat and wig and my old tube radio.. 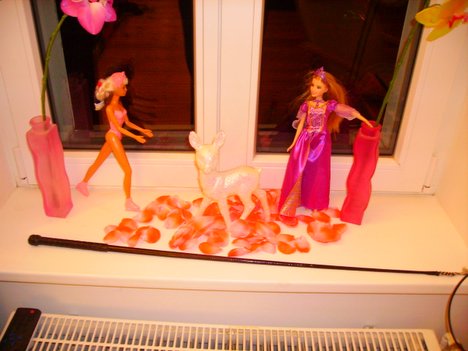 Most of my shoes are now under my real transigen actually only thing a flat object, a large H&M giant poster. Actually my blue-yellow sofa is covered still white and wearing a white cushions and pillows Playboy Bunny. On the wall, an autograph card of Desiree Nick hangs, framed by some wigs of different colors. My MirÃƒÂ has ³ as “that does not work” Something else must be pure. As a picture of us coming in a little grace period and my mirror is now also in the living room…. The other wall is empty, since we are still looking for a nice poster… It did not happen to be a Priscilla Queen Of The Desert or much better a Kinky Boots Poster? 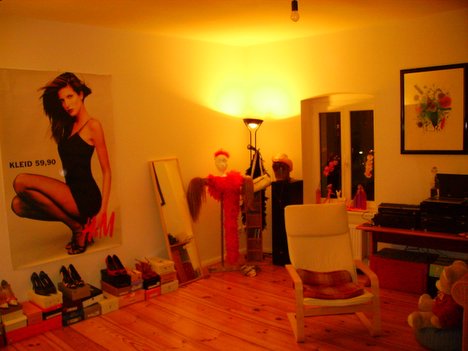 Transenklischees, okay, okay, We serve it up, although I really do not know any trans apartment, would actually use such clichés… 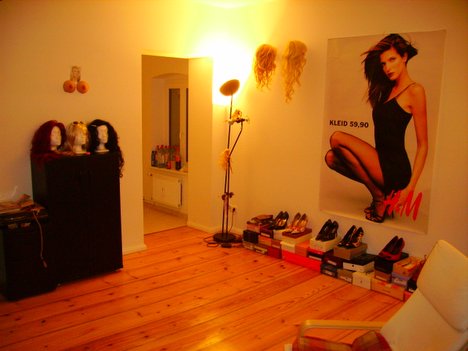 According to Janka the whole thing now looks better than before… I'm there somehow not quite sure, but no matter, Sonntag kann ich ja wieder aufräumen und den Damen ihre guten Stücke zurückgeben 🙂 Wichtig ist dabei eine kleine Dame, their Barbies were diverted straight unasked. If there are demands, then someone comes quite provide explanations…

…But actually I had imagined it would be worse. My walls were not painted pink, I was not a plush sofa placed in the apartment and my bedroom was left entirely untouched even.

Well they just did not say it, but all evidence suggests, that it takes some time really to Berlin – and I know, wovon ich da rede 🙂

… I must go to a small section of a chat a Monday post with Nina Petite, because it shows something, that could be deployed.

I think so, that the Trans further band together in Berlin and Nina will eventually find their abode in Berlin. I mean that was now 4-5 Weekends in a row in Berlin and now a weekend no longer. This causes a weekend without Berlin that she then writes confused at once…

They dubbed sitting in Bamberg Berlin than here and has noticed how boring Bamberg is actually… But read for yourself:

Nina Petite: you are now actually gone under the free Monday afternoon had trickle or independent work year students? And Denise still equal to?
Zoe: I do not nene
Nina Petite: undergone?
Zoe: no, I belong to the tootzurarbeitgeherinnen
Nina Petite: I do too…and there even without the party night before
Nina Petite: ned to say it always so beautiful…each workday is a small death?…ne that was something else
Zoe: was hard this morning
Nina Petite: when are you coming home?
Zoe: half 4
Nina Petite: and to work?
Zoe: 9
Nina Petite: but seems to be be a nice celebration for your blog been…what has he done denise again? filming in Berlin?
Nina Petite: why do I say here again??? I'm in bamberg
Zoe: and, I think so
Zoe: looking for you but have a flat?
Nina Petite: all world verschlägts professionally to berlin…I need to work on my karma…all have more luck than me
Zoe: oh you were, quite a whole lot frequently in Berlin in the last time
Nina Petite: yepp…which has now somehow negative follow
Zoe: why?
Nina Petite: because I go out on the weekend that has now been missing…I think these were now 4 or 5 wes in a row…and this we…was bored here
Zoe: grinz
Nina Petite: das ist echt doof…before this berlin-sprint has me out does nothing…but this we…laaaaaaaaaaaaangweilig
Zoe: yeah, I see, not long now 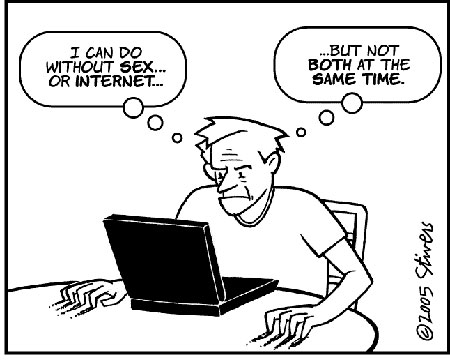 so, for almost 130 Hours I live now so firmly in Berlin and in three days I work in Berlin. In the meantime, to the CSD was and I visited most diverse bars to wireless use.

Unfortunately, I am of completed of all media.

My stereo is still in Hamburg, ist also, drove like my washing machine with the first not having moved. Cable TV or an antenna I have not, therefore falls flat TV. The scart cable from the DVD player to the TV is unfortunately still around in Hamburg, so I can bend even instant TV. But the worst is, I have no internet. According to Hansenet and Alice I want the 02.07. be unlocked. From then on, I would theoretically DSL – Unfortunately, however, depends (as was to be expected) even my DSL in Hamburg on the wall, where I am at the latest 06. would cut.

No internet – Webmaniac for a tranny that is about the maximum penalty. All my attempts, one of about 10 to me to crack flying W Lane are unfortunately failed in my technical Unsachverstand…. So I now go every night bars and cafes in berlin, offer Wifi.

Sunday I am in Generation X Kitty with a few nice hours, ensconced some cola and much Wifi, Monday I had the Sanatorium 23 visits to various club mate and now I'm sitting at Tante Horst, only a few feet away from my apartment….

That all these stores the rainbow flag are not averse, is not planned yet somehow recognizable. (Must be all the territory).

It is nice, hang out every night in some bar, but somehow not fulfilling. I need internet, and a TV – or at least one contact.
Und ein Wochenende zum Rumtransen 🙂