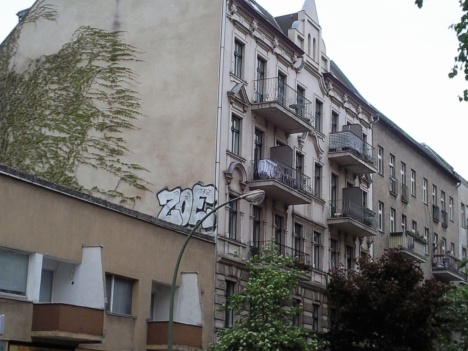 I was not him and I was never there!

Lately, I keep reading about the issue of street. Thus one can mean the whole artistic and artistic graffiti sticker.

As far as I know to see the “Cause” as an artist and even some House members see it that way. …In other countries are even real estate values ​​have risen, if only the right artist has immortalized there….

I believe, quite so far it is not yet in Berlin, but there are at reclaimyourcity.net a very nice gallery of many Berlin Street Arts, many of which are really great. Just watch and be amazed. There should even be a street art tour of Berlin, the one leading into various backyards and even in private buildings…

Why do I get on reclaimyourcity.net? Now I could never get it, until I saw the above artwork today, that rather than vile graffiti, because is seen as a street… And I swear, I was not.

If a CSD in any city, then it makes sense, is the most local television stations to watch times, to determine, whether it was worth it, that you looked into any camera, who made there by the roadside videos and movies…

I asked the two still, what it would take… “Ah NDR – Hamburg Journal? In, then take me times with pure ;-)… Have fun.” 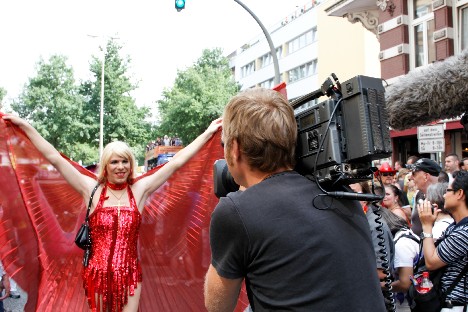 I was really hoping for the camera crew of Hamburg.de,who had asked me, come to her to spread my wings and Moderation… Clearly I'm doing this… but I could still see no video Hamburg.de… But I also appreciate, that they are but rather for the interview with :Valery Pearl: will decide. 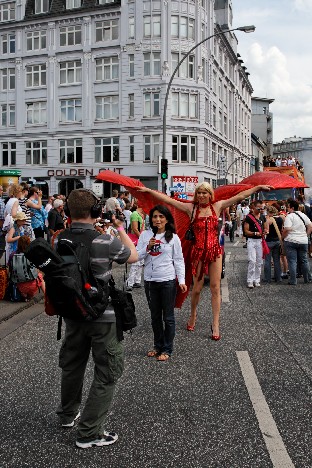 But instead I found myself just yet again briefly in the Hamburg Journal… Dort also, where we it last year but then trotz Interview did not make. But I think the NDR HH – Strictly speaking, the Hamburg Journal has always a much better distribution than Hamburg.de.

Here is a small picture, to me H. H. drew attention…. gaanz back and sooooo small you can see my wings… do not care about this movie, but he is a stopgap for the next hopefully noich Video Hamburg.de 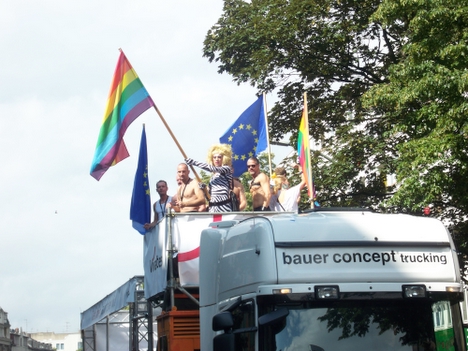 Bac to Part I

So we let the two crazy chickens Frankfurt seemingly continue to the end of the parade and the parade itself followed straight away when suddenly the music was. What had happened? Power failure at all Truicks simultaneously.. Hmm, can not really be, yes because the trucks have no extension cords, which would have connected to the public electricity network and that at one blow all the generators at once give up their mind, is actually as well never happened. It was funny – and unexpectedly – especially, because no one knew exactly, what was going on. 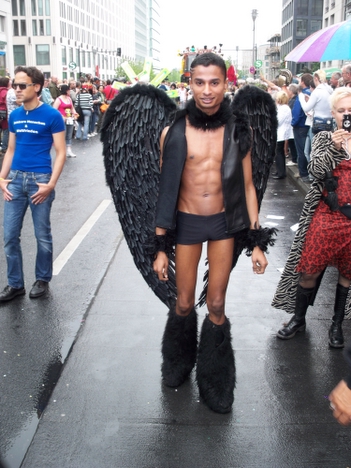 We suspected – correctly as it turned out in retrospect – Daran dass will lag, that our part of the parade was just at the Holocaust Memorial and has been omitted for reasons of piety to the music. Actually a terrific action, but it would have been better, if you would have understood this action and if it had been pointed vielleciht. 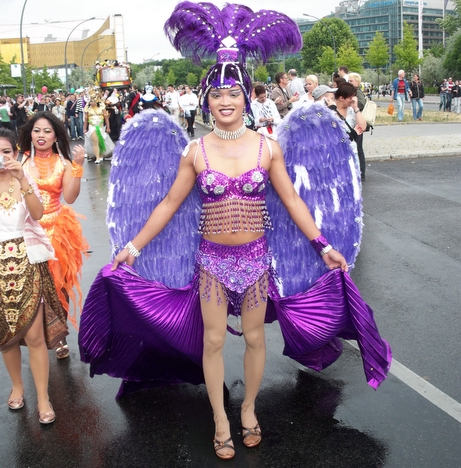 When we left this silence and the monument behind us, then went back to the music and we met some politicians. While we are just behind the car “the Left” hinterherstöckelte, we saw Kühnast woman standing at the roadside and had to talk about it briefly with a effigy four ladies, where we did not talk about long. A short time later we met with Angela Merkel in person – or something like that. Although I do not know. Somehow I have just seen twice. 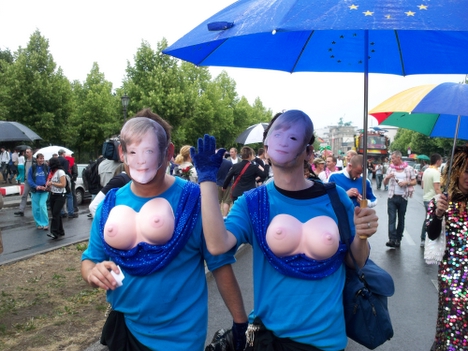 In the curve in front of Potsdamer Platz it was finally a little Sunny and fully. Fully not only on the road but also ON the road, because some trucks had bad problems on the curve. So stopped a parade after time. But was away at Potsdamer Platz is the best. had something of crowd of people.

Tom also had their cameras placed there for the transfer. Later I was able to verify www.onlinetvrecorder.com, that we were at the wrong time, wrong place. I saw Nina us far away approaching slowly, Tom turned as the advertising. MIST. As Tom then carried on of course we were pulled over – without being in the picture. Janka and Sheila, however, were in the picture and that in my – and not entirely coincidentally just as the large poster in the background of the Blue Man Group go. Blue Drag Group? 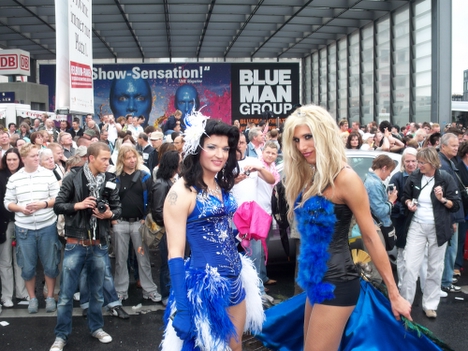 Jupp, the area around Potsdamer Platz was the most exciting, you could hardly get out of the posturing – what you also do not want – but it was almost a little hard to talk sometimes. For example, with the two girls, me that I not only posed for a photo for me. The photographer, I thanked the, said the two: Yes we are Hamburg friendly… *Stutz – how do they know where I am * not know, but they were from Hamburg… I can not believe, since you have an extra draw to Berlin a few times to make hamburger girls.. 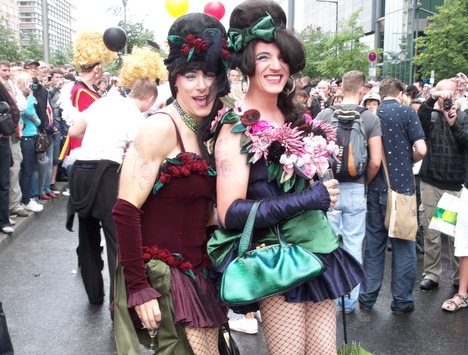 No 10 Meters but I was taken aback again, as two girls (and real time) came up to me and responded me by name, they needed a picture with me… Generally, I wonder about almost anything, But when people, I do not know, call me by name, I'm always a bit confused. It turned out, that the two girls the blog absolutely Friedenau typing and are frequently found here in the comments… Had I been asked yet, who as well put behind, Now I know it, these two girls. 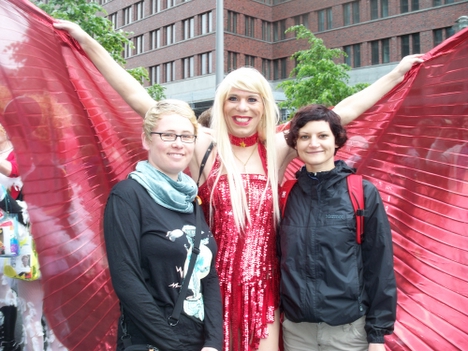 And it ran on the CSD already ridiculous people around, that you have to really say, because we were really normal. a few hundred meters behind the Potsdamer Platz, for example, were two mistresses around, had a total of four slaves here, on the statement: “All slaves go to the ground” hastily react as desired. What, however, had to look this blue flutter animal in this ensemble, I do not really. Fickle thing. 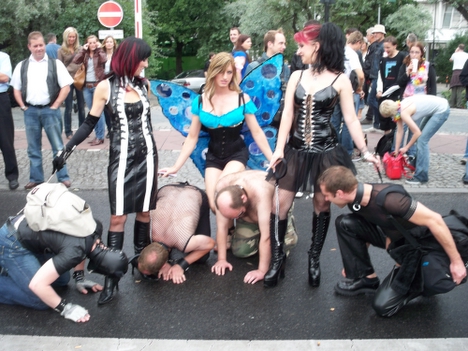 Somehow I lost at this point of the parade my tour group. But more on that in the third part of the CSD 2008 Berlin tomorrow.

Girl in a Hot Rod 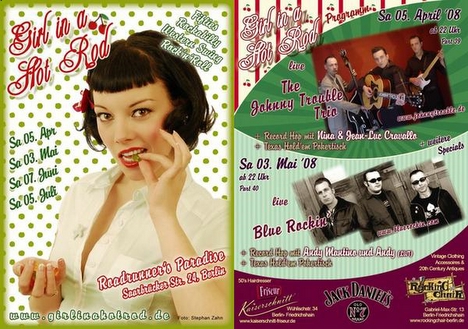 Actually, this weekend the Clubs International in Kino International announced and although I really did not feel like, I got ready. Funny in the rest of, that Sheila and Janka was just. Well, the appetite comes with eating or something like that.

Some point Sheila called me and said, “approximately 15 Minutes I'm there – btw. was hast Du an? Since this area is still such a 50s Party, the Girl in a Hot Rod Party, also of Else is organized. We should look past again.” 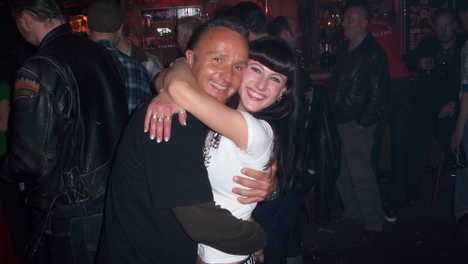 Something just tells me the good 15 Minutes, before ringing here… …I wore green eyeshadow and bem best will not, what would fit for a 50s Party. So convert green in black, search out new dress – and all that please fix. …I'm not even known, to be the fastest, but if there is penetration, then it is always somehow. 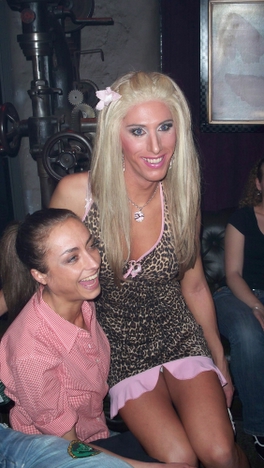 A short time later we collected then Janka and a formula, which was actually just gedresst, to save the entry to the AI… 15 Dressing minutes and it was the Turk Mellek Lekmel with five o'clock shadow and a very gebährfreudigen pool. Nevertheless, she actually wanted to go to AI, allowed us for the first Girl in a Hot Rod accompany. 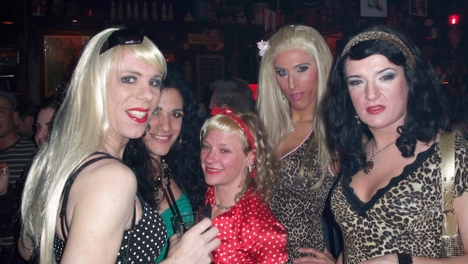 Iregendwo in Berlin-Mitte, the Roadrunner's Paradise is located, and we were first looking. Somewhere in the back, it glowed red, and we saw an old American road cruiser. Already! Here we are right. At the checkout then actually sat Else and greeted us with kind words and free admission.

But those of you thinking, of something like that I am guided in my party assessment, you are wrong, if I find something not good then I write also – but was, absolutely to anticipate the same is not the case. 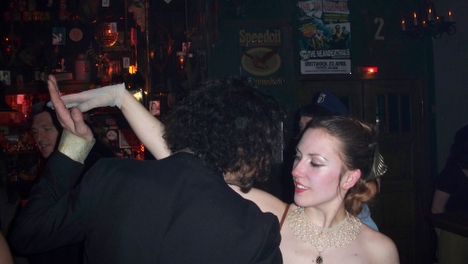 The Roadrunner's Paradise is a class store, the wardrobe is actually a shop and the shop has somehow the feeling of a garage.

And, I know, that sounds funny. I mean a garage, pimp even cooler cars and motorcycles in the cool dudes, which are unique or at least quite old. While listening to the rockabilly and all have at least a few tattoos. So not in the garage around the corner Autohöker. Was that clear?

The counter, the Roadrunner's Paradise is packed full to bursting point with any Krims Krams, but the fit is totally, We poured Jack Daniels with Coke or ginger ale, an old motorcycle standing on the wall and on the stage hangs a picture of Elvis.

Just as the store is also the audience for the most part is very cool, whether they are arrested in time, or simply an evening as we turn back the time is not really matter. It does not itch. The main thing all of them have their fun. I had definitely.

Was played, as might be expected, eine muntere Mischung aus Rock’N’Roll und Rockabilly. Of the live band Johnny Trouble Trio Unfortunately, we were only the last song “Ring on Fire” with. Shame would certainly have been more nice.

Otherwise you have to say, people know us now. I've heard for the second time, that we are present at every good party. The nice stone which I have entertained me for a while, knew us from the Boheme Sauvage and from Admiral Palace und von wasweissichwoher 😉 Er sei ausserdem ein gute Freund von Miss Julietta, with which we are at the letzten Boheme Wild Party talked for some time. 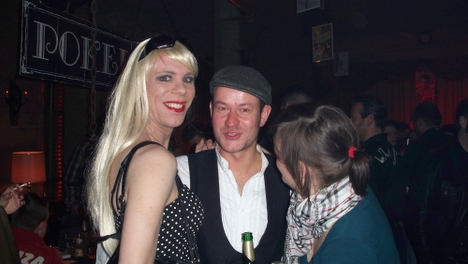 In general, this seems to be all a pretty close-knit community, you meet a whole range of people repeatedly. Now, the better we remember, as we alldie (this is certainly easier), but there are always more, that you meet again. Class. 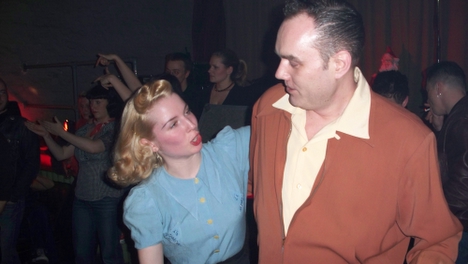 Present this time again was the television, that Sheila and asked me to the party… We have delivered a first, and not herausgestottert us for the first time before a camera as the words, but good and useful answer. We learn :)Perhaps we are indeed times NOT cut out this time… Now I just have to find out, what have turned…

By the way, I have found again, that I have a very nice thick head. By that I mean a thick head, not a cat or a very personal opinion but simply too large a head. So I bought the Hawker on camera for a dress matching headband, but that also did not fit with elses help on my head. Not even helped behind the curtain remove the wig and give it a try… No chance!

Also, the Hot Rod Girl in a party we will certainly visit a number of times, is the class. Somehow it reminds me a little of the Rock’n’Ink Party im King Calavera in Hamburg.